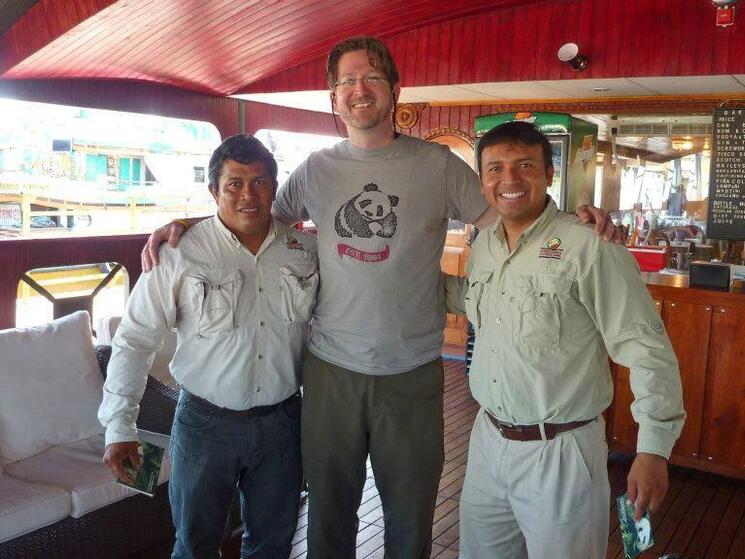 WWF's Jeff Muller accompanied our recent voyage through the Amazon. We caught up with him to get his thoughts on this vast region, which contains one-third of the planet’s remaining rain forests.

WWF Travel: What was your favorite animal sighting?
Jeff Muller: There were so many that it’s hard to pick a favorite, so instead I’ll do a top three. First on this list were the three hoatzin we saw hidden in a grove of Cecropia trees. Also known as the “punk rock bird” because of the Mohawk-like plumage on top of its head, this unusual bird was one of the creatures I had really been hoping to see. Second would have to be the red howler monkeys that playfully leapt from tree to tree when we were deep in the Pacaya-Samiria National Reserve. Later we heard their storied howl from a couple miles away, making it obvious that they are indeed one of the loudest animals on Earth! Third would have to be the Amazonian manatee that had been rescued from poachers by the Reserve’s rangers, and which they released while we were present. That was a truly special moment.

WWF: What surprised you most about the Amazon?
JM: Although not surprised, I was constantly amazed by the incredible diversity and abundance of life found in the Amazon. Every excursion uncovered a new species of plant and animal.

WWF: Did you have opportunities to meet local people?
JM: We had a number of opportunities to meet and interact with local people. Of course there were our excellent guides and crew, all of whom were local to varying degrees. And we spent one day visiting with Ribereños (river people) in two different villages. One village was on dry land. In the other, the houses were on stilts because during high water season the residents live over the water. During these experiences we got to visit a home, a school and a shaman. We also had a number of unexpected encounters throughout the trip, when we would come across local people during the course of our excursions. Sometimes they were selling beautiful handmade crafts, but many times they were simply curious about us—just as we were about them. All of our interactions were wonderful, especially those with the many children who loved to have their pictures taken and were always laughing and smiling.

WWF: What did the Amazon sound like?
JM: That’s a tricky question, because there were different sounds around every turn. We saw more than 110 birds over the course of the trip and each had its own distinctive song, from the hee-haw of the horned screamer—also known as the donkey bird—to the noisy chatter of a flock of parakeets. There was also the chirping of frogs and the whir of insects, the splash of river dolphins and the rush of the occasional rain.

WWF: Number one piece of advice to future travelers?
JM: Bring a good camera and a great pair of binoculars. It would be a shame not to clearly see all of the amazing sights of the rain forest. Also, bring a swim suit. There’s nothing like swimming in the same waters as the paiche—one of the world’s largest freshwater fish.

WWF: What did you take away from the trip?
JM: For me, there were two important takeaways. First, the Amazon is an incredibly special place that we need to work to protect for ours and future generations. That may sound cliché, but trust me—one day spent in the Amazon will make you a believer. Second, protected areas really do work, and the work that WWF does is vital. We saw plenty of anecdotal evidence of this throughout the trip: Simply put, there were more species in protected areas than in areas that had no protection. This was true for both abundance and diversity.