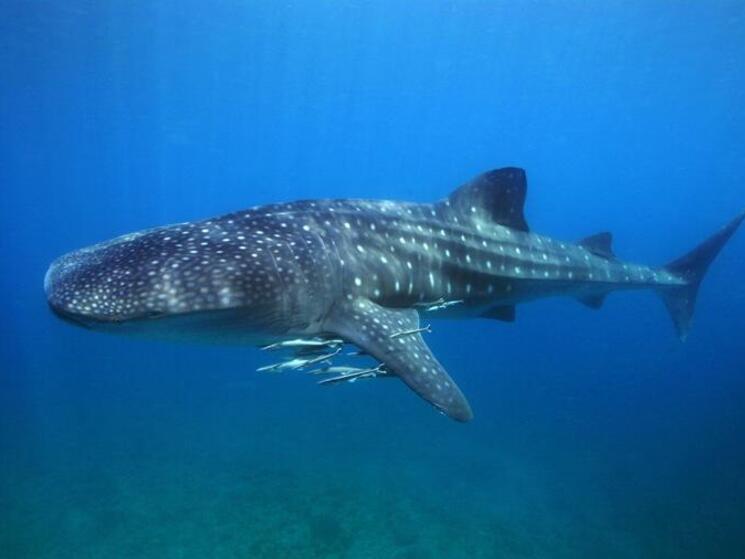 Close Encounters: Swimming with Whale Sharks in the Philippines

“Over there, over there!!!  Get your masks and flippers on!” our interaction officer, Embet Guadamor, yells. He’s standing high on the mast of an outrigger pointing southwest to what looks like open ocean. But it’s not open ocean to his eagle eyes. He’s spotted a dark, spotted mass under the water, and it can only mean one thing: We’re about to enter the realm of the whale sharks.

We quickly put on snorkels and masks and wait for his order to jump in. Once underwater, a swirling mass of bubbles, flippers, algae and plankton give way to an ominous sight. A giant hulking mass is heading straight for us, like a bus on a collision course. We wait a couple of seconds longer and then the mouth, wide open, comes into view. Like the opening scene in “Star Wars,” the massive, hulking body slowly and silently floats by in what seems to take minutes.

As we get to the end of the body, I realize that the tail is coming a little too close for comfort. I need to get out of the way quickly because getting swatted by the tail is about the only way to get hurt by what must be the most inappropriately named animal in the world.

The whale shark is the world’s largest living fish species, and it is just that … a fish. Whale sharks are filter feeders that eat plankton and algae and are about as likely to attack a human as William Hung is to win a Grammy. Little is known about their behavior, feeding patterns or reproductive habits. Because they range over vast areas, we don’t even know how many there are. And perhaps most importantly, they are classified as threatened by the International Union for the Conservation of Nature (IUCN).

I came to Donsol, the Philippines, with a crew from ABC New’s “Nightline”—Correspondent Bill Weir and Producer/Cameraman Almin Karamehmedovic. They wanted to document one of the most successful conservation stories in recent history – how a sleepy fishing village was transformed into the undisputed “whale shark capital of the world.”

It’s a 40-minute flight, followed by 1 ½-hour drive to Donsol. But it’s a world apart from the traffic-choked streets of Manila. You are met at the airport by spectacular views of Mayon Volcano, the world’s most perfect cone volcano. And once you arrive in Donsol, it doesn’t take long to enter an underwater experience that should be ranked as one of the Seven Wonders of the World.

It wasn’t always this way. While the locals have known about the whale sharks for more than 100 years, the scientific world didn’t find out about them until 1998 when local scuba divers captured the first video documentation and alerted staff from WWF-Philippines. WWF then worked with the community and other conservationists and scientists to begin developing a scientific and ecotourism program.

Now the fishermen, who had previously been afraid of (or even hostile) to the whale sharks, are reaping major benefits and they are the whale sharks’ fiercest defenders. Thousands of visitors from around the world descend on Donsol every year to snorkel with the whale sharks, leaving behind millions of Philippine pesos that are shared equally among the community, boat operators, whale shark interaction officers and others.

Over the course of two days, we swam with around 10 whale sharks, including a 25-foot behemoth that stayed with us for almost five minutes. We were careful to follow the guidelines written by WWF staff to ensure the safety of swimmers and the conservation of the whale sharks. No scuba gear is allowed – only snorkels – because WWF wants to limit time spent with whale sharks, and bubbles from scuba gear may disturb them. And we have to maintain a respectable distance from the fish, mostly for our own safety, but also so they stay near the surface. Getting too close usually results in them diving for deeper water.

WWF is documenting the sharks through a simple, but effective tool. Every day, WWF researcher Dave David dives with the sharks and photographs their gills. He then enters the photographs into a global whale shark database and compares each photograph with others by carefully aligning the gills and then comparing the spot patterns.  He then determines if it is a new sighting or an existing one because a whale shark’s distinctive spots are like a human fingerprint – no two are alike. In fact, anybody who photographs a whale shark can enter their photo into the ECOCEAN database.

David also works with scientists from around the world to satellite tag the sharks to help determine their behavior and migratory patterns. They can travel thousands of miles and very little is known about where they go, so by attaching satellite buoys on thin ropes to their bodies, we can get priceless data that will help determine how best to protect them.

It was hard to leave Donsol, its whale sharks and its people behind. I wanted to keep diving past the point of exhaustion because each encounter was unique and exhilarating. During one encounter, I was eye-to-eye with a whale shark who simply stared at me with an almost perplexed look, probably wondering why in the heck I found him so fascinating.

We hit a clear, plankton-free patch of water and sunlight just poured in and lit up the spots on his immense body. He stayed with me for about 45 seconds and then gently peeled off into deeper and darker water. While for him this encounter was probably like hundreds of others he’ll have in Donsol during the season, for me it was 45 seconds that will last a lifetime.

See a video of whale sharks filmed during this outing.