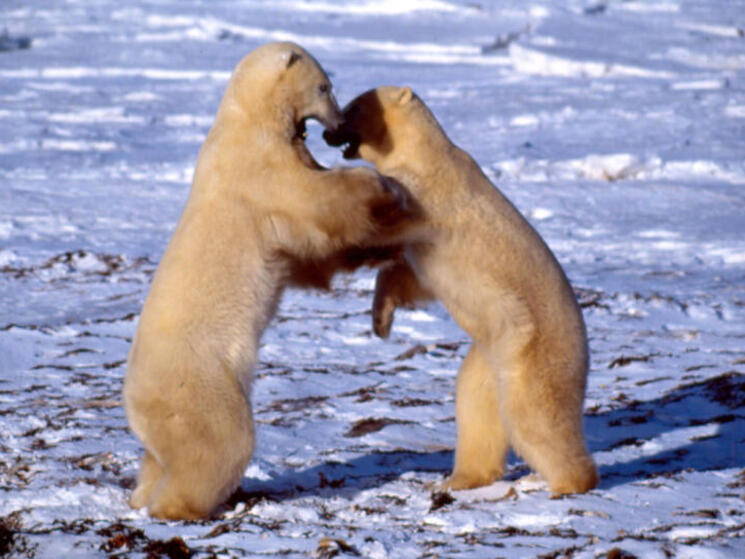 Polar bears are our planet’s largest land predators. Between 20,000 and 25,000 of these amazing animals roam the arctic today in the U.S. (Alaska), Canada, Russia, Denmark (Greenland) and Norway. Below are seven interesting behaviors to look for when observing the species in the wild:

1. Head movement. Keep an eye on a polar bear’s head. A bear will move its head from side to side when it wants to play with another. Adult polar bears will sometimes do this while on their hind legs with their front paws hanging down besides their bodies.

2. Nose-to-nose. Polar bears often communicate with their noses. For example, if one bear wants food from another, it will approach slowly, circle around the food source, and then gently touch the other bears nose with its own. This respectful, non-aggressive behavior is sure to lead to a free meal.

3. On the attack. Like many large animals, a polar bear’s charge is something one will not forget, but be extra cautious when a bear has its head down and ears pinned back—this means that the bear is on the attack.

4. Sleeping behavior. Like humans, polar bears sleep an average of seven to eight hours a day. They also frequently nap to conserve energy. The bears typically curl up and dig shallow pits in the snow, sleeping with their backs to the wind. For comfort, the bear uses one of its outstretched paws as a pillow and allows snow to pile up around it to provide extra warmth and insulation.

6. Types of fighting. There are two types of matches—those that result from aggression and those that are just play. Aggressive fighting usually occurs between males during the breeding season and when attempting to steal food caught by others. Play fighting occurs between males to tune up hunting skills and between young cub siblings learning to defend themselves.

7. Different sounds mean different things. Polar bears use a number of different sounds, and each has a purpose or meaning. When a bear is angry or feels threatened, it makes a low growling sound as a warning. The sound is similar to that of a trumpeting elephant. A polar bear will hiss and snort when challenged by another bear and when in distress, a bear makes a chuffing noise.

See polar bears in the wild on a WWF tour.