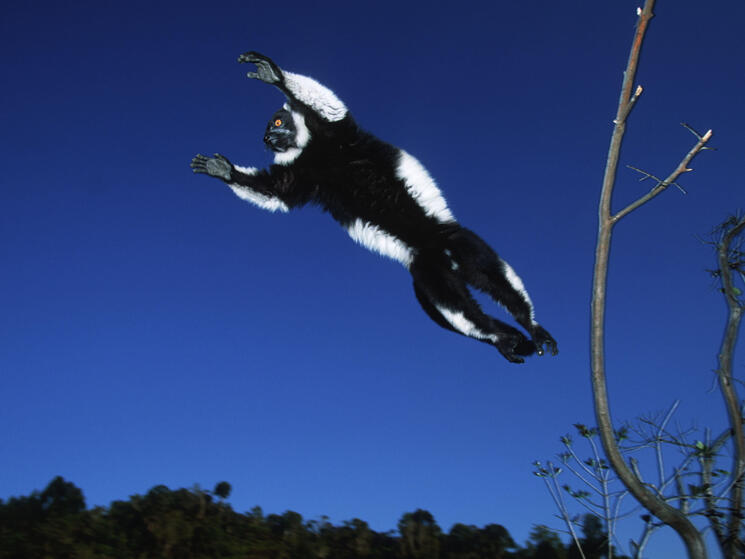 Easily recognized by their long, bushy tails and translucent eyes, lemurs are found only on Madagascar and the Comoro Islands. These unique creatures are the most threatened of all primates and WWF and Malagasy conservationists are working together to establish and manage parks and protected areas in Madagascar.

11. The name lemur comes from the Latin word lemures, meaning 'spirits of the night.' Many Malagasy people believe lemurs are similar to ghosts because of the eerie vocalizations, reflective eyes and night activity of some species.

10. It is believed that the ancestors of lemurs crossed arrived in Madagascar from Africa by rafting on floating vegetation early in primate evolution. They then became reproductively isolated.

9. Though they are primates, lemurs are much less closely related to humans than monkeys and apes. They more closely resemble primitive primates and can, therefore, provide insight into primate evolution.

8. Some lemur species often appear as though they are “sun-worshipping." Their bellies are not protected from colder temperatures so they warm themselves by basking in the sunlight before beginning their daily foraging activities.

7. When distances between trees are too great to leap, lemurs descend to the ground and cross distances of more than 330 ft by standing upright and hopping sideways with their arms held to the side waving up and down, presumably for balance.

6. Female lemurs carry newborns in their mouth until the baby is able to cling to the fur on the mother's stomach or back.

5. Lemurs aid new plant growth by dispersing seeds that pass through their digestive systems after they eat.

4. The primary threat to lemurs is habitat destruction from agriculture and logging. Lemurs are also trapped for the pet trade and hunted for food.

3. Living species of lemurs range in size from the tiny, 1-ounce pygmy mouse lemur to the 20-pound indri lemur.

2. The largest living lemur weighed as much as a male gorilla, between 350 and 440 pounds. The species became extinct when humans first settled in Madagascar about 2,000 years ago.

1. Male ring-tailed lemurs get in “stink fights” by rubbing their tails in their own scents and then shaking it at their opponent who then either responds with physical aggression, a display of his own or by fleeing.

See lemurs in Madagascar on a WWF tour.