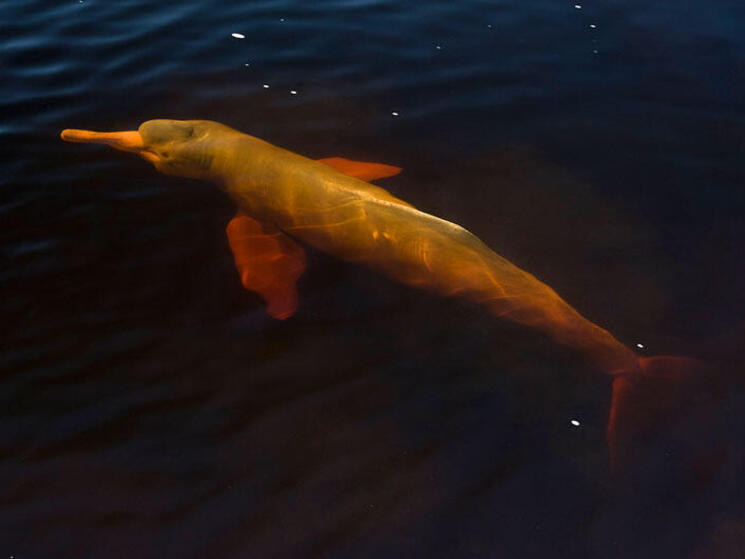 The elegant gray and pink river dolphins that glide majestically through the chocolate-colored waters of the Amazon River aren’t always thought of in such glowing terms. In fact, many residents of the Amazon basin once considered them to be bad luck or even downright evil.
"It is believed that these myths kept local people from intentionally killing them and have actually played a role in the stability of the Amazon river dolphin population," says Meg Symington, WWF's managing director for the Amazon. "But other things can be threats since their habitats are often polluted or blocked by dams, and they easily can accidentally get caught in fishing nets."

Though the river dolphins are a species at risk, they have flourish for centuries in part because local people believe they possess magical powers. As you’d discover from the Amazon-born guides on a riverboat voyage in Peru, several legends surround the river dolphins known locally as botos. And once you see them for yourself, you’ll no doubt be taken by their seductive powers, too.

5. During the day, river dolphins conduct their usual dolphin business. But once the sun goes down, they morph into handsome young men dressed in all white. They come ashore, strictly for the purpose of seducing the wives and young girls of local villages and impregnate them. Before the sun comes up, these shape-shifting encantados turn back into dolphins.

Nature writer Sy Montgomery described such an encounter in her book Journey of the Pink Dolphins: An Amazon Quest (Chelsea Green Publishing, 2009). It happened to the cousin of a local man she interviewed. “A boto had come to her one night, disguised as her husband,” the man recalled during the interview. “But her husband was away fishing. They made love as if in a dream. Nine months later, she gave birth to the baby.”

4. Someone swimming alone in the river could be whisked away by a shape-shifting dolphin to a magical underwater city called Encante. They’ll live out the rest of their lives there, never to return to land again.  Perhaps this myth started as a way to get people, particularly youngsters, to be careful when swimming. The dolphins, after all, can bite—as can the piranhas that patrol the Amazon and its tributaries.

3. If you wish to find a rare Amazonian manatee, you must first locate an Amazon river dolphin and make peace with it. The dolphin is considered the manatee’s guardian.

2. Don’t ever make eye contact with a boto. If you do, you’ll have the most dreadful nightmares for the rest of your life.

1.It’s bad luck to kill an Amazon river dolphin—and even worse luck to eat one. Many Indian tribes still consider them to be sacred creatures and thus bestow a great deal of reverence on them. Rain forest-dwelling shamans have been known to learn medicinal techniques from the dolphins.

Look for river dolphins on a WWF tour to the Amazon.