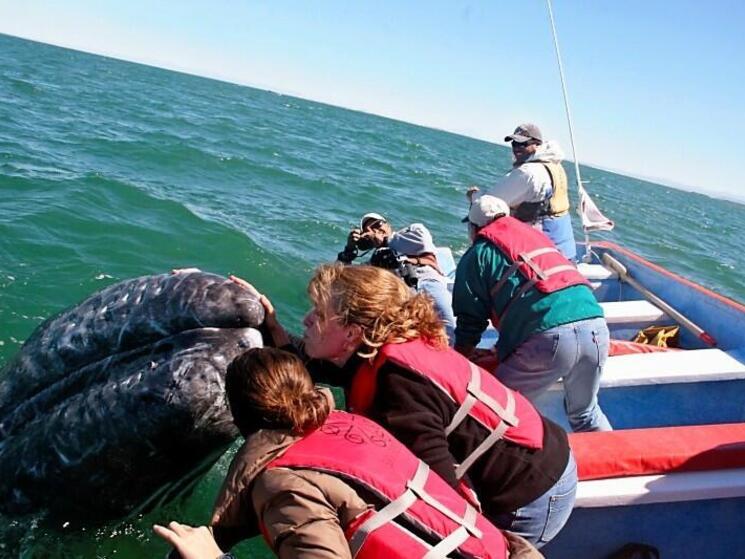 WWF Senior Policy Officer in Species Conservation, Leigh Henry, recently headed to Panama for the International Whaling Commission’s annual meeting. Before she left, we caught up with her to chat about whale-viewing in Mexico’s Baja California.

WWF Senior Policy Officer in Species Conservation, Leigh Henry, recently headed to Panama for the International Whaling Commission’s annual meeting. Before she left, we caught up with her to chat about whale-viewing in Mexico’s Baja California.

What types of whales might one see in Baja California?
It’s truly amazing all the species of whale you can find in Baja—blue, fin, humpback, sperm and gray. You can also find orcas, or "killer whales," but these are actually a species of dolphin. On top of that, Baja is also home to sea turtles, whale sharks, Mobula rays, California sea lions and hammerhead sharks, just to name a few. It’s an absolutely phenomenal place.

What is the best time of year to visit Baja for whale viewing?
I would say the best time to visit is roughly January-April, when the gray whales are in residence and you can see the mothers and calves before they start their long journey north to their summer feeding grounds in Alaska.

Have you observed any unusual whale behavior?
I was in Laguna San Ignacio last March, and had one of the most amazing experiences of my life when our little boat spent a good half hour interacting with a gray whale mother and calf. I know we have a tendency to over-anthropomorphize animals, but it certainly seemed like the mother and calf were vying for our attention, trying to beat each other to the boat for the next scratch. It was absolutely incredible to be so close to such majestic animals—the very animals I work to save sitting behind a desk in Washington, DC every day—and to feel as if they were enjoying our time together as much as I was.

How do you feel about the practice of touching whales that come up to the boat?
In Laguna San Ignacio, the whales—mostly mothers and calves—are incredibly friendly and tourists are afforded the opportunity to interact with them. I certainly wouldn't advise allowing this close interaction everywhere, but in the lagoon, the whale watching operations are very well regulated—boats are only allowed in a small part of the lagoon, so the whales have sanctuary should they seek it, and boats aren't allowed to approach the whales; they wait for the whales to approach.

The gray whales in San Ignacio have been the subject of years of study and no ill effects have ever been detected from these interactions. Were they to be, then of course I would recommend ceasing the encounters, but at the moment, both whales and humans seem to enjoy it!

Are you optimistic for the future of whales?
Absolutely.

Over the last two centuries, the main threat to the survival of whales was commercial whaling. The world acknowledged that threat and has, for the most part, addressed it. However, many populations have yet to recover from this overexploitation and continue to face other threats, such as collisions with ships, bycatch in fishing gear, oil and gas exploration and operations, and an influx of manmade noise into the marine environment which disrupts their ability to migrate, feed, and breed.

Despite what may seem a bleak picture, though, just as the world took action to curtail commercial whaling, we’re slowly waking up to the myriad of threats facing the world’s whales and finding pragmatic solutions to reduce their impact. Shipping lanes have been altered to save the North Atlantic right whale from the brink of extinction; oil and gas operations have been required to alter the timing of their operations to reduce impacts on the Western Pacific gray whale; and significant research is being conducted on reducing the noise generated by ship engines.

If we strive to stay one step ahead of the threats, and not wait until the situation reaches a critical juncture, then I am absolutely optimistic that my daughters, and generations to follow, will grow up in a world where the great whales still swim our oceans. Anything less is unthinkable.

Travel to Baja California to see whales with WWF.