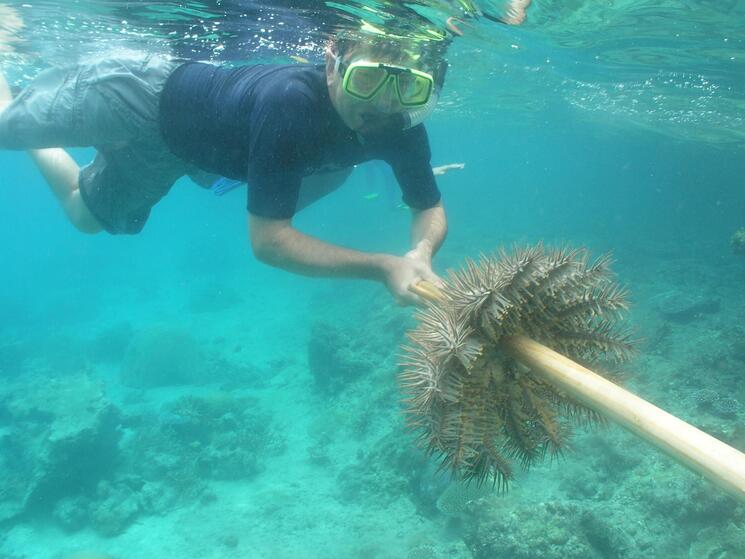 In Palau, Contending with a Crown of Thorns

Skimming water above a coral reef off Ngeruktabel Island in the Republic of Palau, Ron Leidich takes a deep breath and free dives 35 feet to the sea floor. Snorkel mask strapped on, he’s gripping a stick that looks more like a sharpened broom handle than an important tool in marine conservation.

Leidich, a biologist and WWF snorkeling tour leader, spots his target—a spiny, dinner plate-sized crown-of-thorns starfish clinging to the side of a roughly textured coral head. This particular starfish is a carnivorous species that feeds on coral polyps. One starfish can eat its weight in coral daily and can consume up to 65 square feet of living coral reef a year.

Raising the wooden stick above his head, Leidich thrusts its point through the spiky sea star. He shimmies his way to the surface, carefully holding the spear so that the starfish’s poisonous barbs keep their distance from his arms. He put the starfish in a bucket on his boat, later dumping his bounty in a small cave carved into one of Palau’s many uninhabited rock islands.

The spear might appear homemade and Leidich’s harvesting technique may be slow, but the method has proven to be effective in the battle to save coral reefs from the invasive species that’s destroying some of the region’s oldest-growth coral gardens.

Leidich leads removal efforts, having ridded reefs of more than 5,000 of them and recruited dive shops, conservation organizations, fishermen and concerned citizens to help.

“I explained that the crown-of-thorns plague was like a wildfire burning down the coral city,” he says. “We couldn’t expect to save everything, but we could protect our most precious assets.”

Leidich first witnessed ancient coral heads being decimated by the ravenous starfish in 1997. By 1998—the same year an El Nino event led to widespread bleaching throughout sun-loving reefs in the Pacific—he began removing the starfish.

“Like firefighters protecting the city's cathedrals, museums and capitals, we chose to remove the starfish from the oldest and most diverse gardens in Palau,” he explained. “Using a site-specific management strategy, we did not move on until a reef was completely free of crown-of-thorns threat.”

As a result, important fish habitats, nurseries and old-growth coral gardens were protected, and additional vigilance will ensure the reefs’ survival.

“Every time I snorkel these reefs, I feel a measure of pride in our accomplishments, Leidich said. “We could’ve stood by and let the starfish destroy these precious gifts, but instead we chose intervention.”