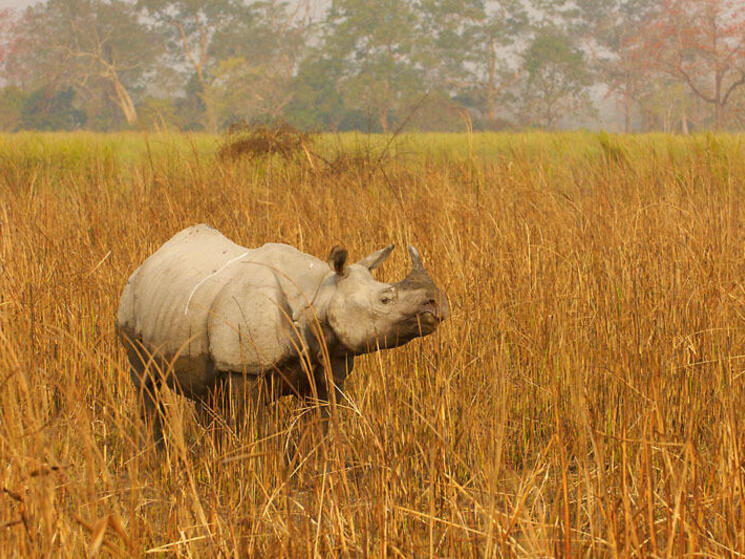 India is known, of course, for its tigers, and no tour to natural areas of the vast Asian nation is complete without time spent in tall grasses searching for the majestic and endangered big cat.

But dozens of other wildlife species abound in India’s top national parks. Among the other species most commonly spotted on recent WWF tours in India are these 10.

Sloth bear: Don’t let their ambling, feet-slapping gait fool you: sloth bears are capable of lopsidedly galloping faster than a human can run, and they are masters at tree climbing. Considered a relative of the sloth and not a bear at all, the sloth bear is a masterful hunter of termites and ants, pillaging an anthill with puffs, grunts and a Hoover vacuum-like force.

One-horned rhinoceros: Kaziranga National Park in Assam was created in 1926 as a refuge for the rhino. Once hunted nearly to extinction, today this two ton beast is a conservation success story, rebounding to more than 1,600 individuals.

Guar:The world’s largest species of wild cattle is the guar—also called Indian bison—and is among the largest living land mammal. Males often weigh 2,200 to 3,300 pounds, and only hippos, elephants and rhinos are larger. WWF travelers earlier this year observed a female with a suckling calf that was likely just a few months old.

Kingfisher: A number of species of the brightly colored bird with a cartoonishly oversized head and sharp beak are considered threatened or near-threatened as a result of human activities, including deforestation. Seeing the shy bird with unusual behavior patterns in the wild, therefore, takes on special significance for the birding enthusiast.

Common langur: Nearly 2 ½ feet tall, with grey hair and a black face, this “Old World monkey” species is often seen wandering through open wooded habitat and urban settings alike. Common langurs sleep in trees but spend much of waking time on the ground, usually in medium- to large-sized groups led by an alpha male.

Barasingha: The endangered swamp deer is seen in the Kanha Tiger Reserve, which is home to the world’s last population of the spotted mammal. It strikingly possesses up to 14 points on its antlers, making it an attractive species to hunt or poach. However, an increase in farm land replacing its habitat of tall grasses is probably the main reason for its decreasing population.

Wild dog: Packs of them roam throughout Kanha and other natural areas. In 2009, WWF members watched wide-eyed as a pack of 19 dogs chased an adolescent spotted deer across the dry, grasslands. The deer ran out of sight, leaving the travelers wondering about his fate.

Bengal monitor: Not as fearsome as their counterparts on Indonesia’s Komodo Island, India’s monitor lizards are solitary and shy and tend to avoid contact with humans. They can grow to nearly 6 feet long.

Rhesus macaque: Though notorious as urban pests throughout India, rhesus macaques exhibit more fascinating behavior when studies in their natural habitat. Troops of them can contain up to 180 individuals.