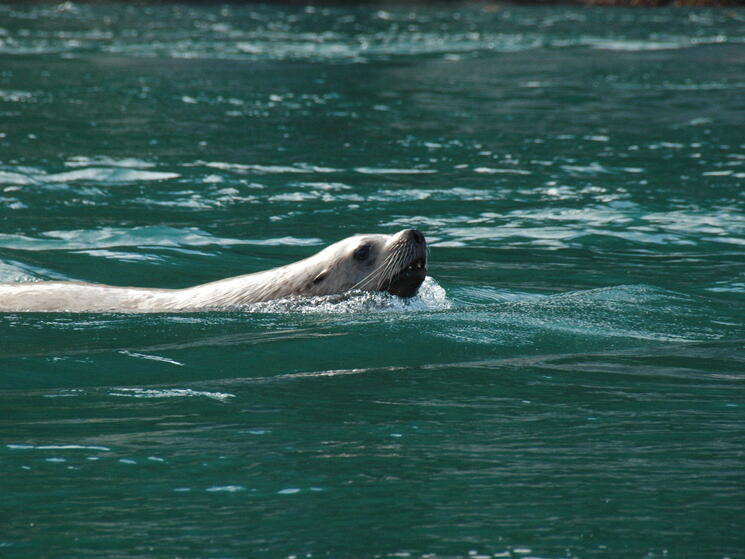 For the most part, animal behavior is ordinary. Yet when we as humans observe them—from a safe distance, of course—we feel like we’re witnessing something magical. Here are five such moments I had on a recent WWF tour to Alaska.

Onward, charge!
Eight of us were in a Zodiac craft, cruising along the craggy, spruce-lined shores of the Inian Islands. Our mission for the morning was to learn about sea lions—in particular the colonies of male sea lions along rocky outcrops.

The colonies serve as bachelor pads for young males too small to compete for breeding rights and as retirement homes for old boys too tired to go after the gals anymore. The sea lions were hauled out on the rocks, sunning themselves or nudging others to get out of the way. A group of them were swimming down below, looking for walleye pollack to eat.

One especially large foraging male—he had to be at least 11 feet long and probably weight a ton—caught sight of us. With steely eyes fixed on our rubber dingy, his bristly whiskers sticking out like thick wires, the sea lion came barrelling at us like a guided torpedo. Within five feet of us, he darted under the boat, slapping his rear flippers against the surface so that a sheet of water splashed the Zodiac’s bow.

As this sea lion was the largest male we observed, he was probably telling us to buzz off—perhaps as a representative of the other males but most likely just for his own selfish reasons. He likely thought our Zodiac was an even-larger male who threatened to infringe on his tasty feast.

A 211 in progress
Several islands in Glacier Bay are heavily used by nesting sea birds, and early summer is an ideal time to see them. The bird colonies at Strawberry Island were particularly active, with thousands of individual birds from several species nesting on or flying around the rocky islands.

We were transfixed as we watched a robbery take place. A murder of crows orchestrated the theft of a single egg from a nesting black-legged kittiwake. The robbery itself was not as surprising as what ensued—at least 100 angry kittiwakes chasing the crows, screaming at them in loud, shrill squawks. The noise was practically deafening.

The crows managed to escape with the egg, and the kittiwakes knew there was nothing they could do. They flew back to the island, their calls changing from angry yells to what sounded like mournful cries.

Bugle call
It was 11:30 p.m. and most of my fellow passengers were asleep. The sun was almost set, casting watercolor-like brushstrokes of burnt oranges across the sky. The mountains were shadowy and midnight blue, and our ship slowed to a crawl because of the presence of a humpback whale.

We saw the lone whale’s spray as it swam portside. It undulated through the water and seemed to keep pace with the ship.

Suddenly, the whale started making gutteral, bugle-like noises that echoed across the water’s surface. The whale was so close and the calls so deep that I could feel them vibrating in my chest. The bugling was unpredictable—three or four in a row, then silence, then a lone call, then silence, and so on.

Researchers don’t know what the whales are communicating in this way. Alaska Whale Foundation  Executive Director Fred Sharpe, who joined us on board the next morning, suspected the whale was communicating with another humpback whose spout we saw a good distance away. Either the whale was inviting the other to join him—or was telling him to keep away.

A mother’s beckoning
Flat sheets of ice the size of queen-sized beds floated atop the inlet waters near Sawyer Glacier. Solitary harbor seals lounged atop many of them, warming themselves in the 45-degree air. Oftentimes, a pup was hidden from our sight behind its mother.

With enough prodding from Mom, the pup came up with a solution: He merely rolled to the left and—kerplop!—fell into the water with a splash.

Perilous walk for a careful bear
Wandering along the observation deck of the bow of the ship as it sat positioned in front of the eight-mile-long Lamplugh Glacier, WWF member Dennis Fox spotted something unexpected out of the corner of his eye.  Just off the starboard side of the expedition ship, along the cliffs lining Johns Hopkins Inlet, Fox noticed a shadowy movement.

We grabbed our binoculars and zeroed in on the subject: a massive brown bear perilously walking up a steep, rocky cliff. The bear carefully ambled along the loose rocks to forage for wildflowers—likely borage or lousewort. Using his massive paw, the bear gently moved aside rocks as he walked a rambling, non-direct route up the cliffs.

Join a WWF tour to Alaska.
Subscribe to RSS Feeds