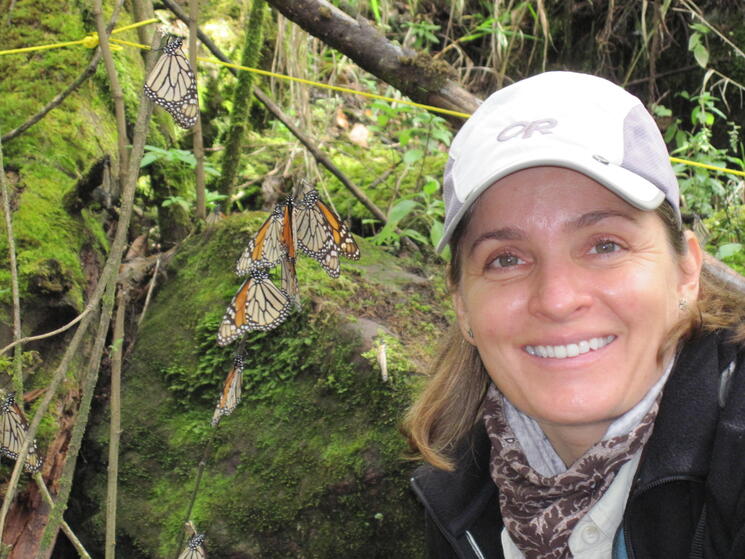 Biologist and nature expedition guide Astrid Frisch possesses a knowledge of Mexico’s ecosystems and biodiversity that’s as large as her passion for conservation itself. So when we chatted recently with the Mexico native about the best wildlife experiences in her home country, she was quick to rattle off a well-founded list.

First on it? Expeditions to see marine turtles. On a Frisch-led tour offered by WWF and Natural Habitat Adventures this fall, for example, travelers will visit the La Escogilla Turtle camp. They will have the rare opportunity to observe the arribada – what the locals call the mass nesting of olive ridley turtles.

“There are so many turtle eggs, it’s hard to walk around them; you have to be careful not to step on them,” Frisch said.

The eggs are vulnerable to a variety of threats, including predators and poachers, so travelers help guard the beach. After the hatchlings have emerged from their shells, they need to make a precipitous journey across the bumpy beach and into the sea – a risky trek for a tiny turtle.

The presence of people on the beaches helps protect the vulnerable hatchlings from hungry birds and crabs, among others – and makes a big impact on the traveler. “She helped us realized a … lifetime dream of releasing hatchlings into the sea,” said P. Goti, a recent guest on a marine turtle tour with Frisch.

Next up on Frisch’s list is seeing the extraordinary migration of Monarch butterflies – one of the most fascinating phenomena on the planet. Millions of butterflies migrate from the northern United States and southern Canada to the mountain forests of Mexico, clinging to every available bush and branch, filling the air with the sounds of their fluttering wings.

“The monarch migration is different from any other wildlife viewing,” Frisch said. “It’s a more peaceful, almost spiritual experience.”

It’s also a strong example of how tourism, when done properly, helps protect the species people are coming to see – and helps the local communities.

“In Mexico, protected areas belong to the local people so tourism in these areas provides them with a steady income,” Frisch explained. “Because the locals depend on tourism for income, they care about protecting the forests and keeping them healthy.”

The same lesson applies to the final top wildlife experience in Mexico – seeing and swimming with whale sharks. WWF got involved with the small fishing community of Holbox on the northern coast of the Yucutan Peninsula when the region began its transformation from a shark-fishing village to a premier whale shark-watching destination. Fishermen started taking tourists out to see the whale sharks and asked WWF for help developing a code of conduct for the swim-with-a-whale outings.

Holbox Island is also the launch point for the whale shark expeditions that Frisch leads.

“I’m not sure what it is about being so near a creature so large,” recalled Gina DeFerrari, a senior policy advisor who served as a WWF expert on a Natural Habitat Adventures whale sharks tour several summers ago. “On the one hand, it was thrilling, and yet on the other hand, I felt a palpable sense of calm.”

Frisch said she feels that same sense of calm when she’s touring Mexico’s best nature destinations and encourages travelers to build extra days into a visit. “Try to stay longer,” she said, “so you can see everything.”