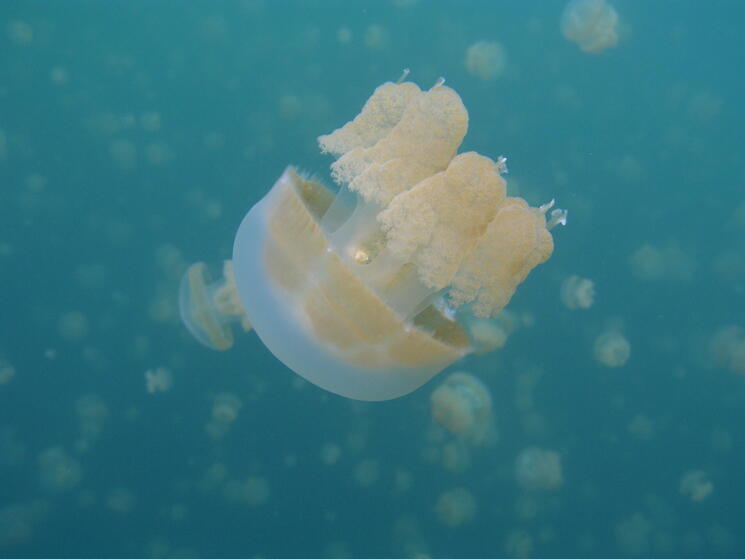 Palau’s Jellyfish Lake: ‘Like Swimming in a Lava Lamp’

How many travel experiences can honestly, truly be defined as “surreal?” Few come close to the extraordinary experience of slipping into a quiet, dark lake with millions of marmalade-colored jellyfish on the rock island of Eil Malk in Palau.

Known locally as Ongeim'l Tketau, the isolated saltwater lake was once connected to the ocean by a tunnel or another outlet that naturally became closed off from the sea. Losing all natural predators, the jellyfish population grew to an estimated 10 million.

WWF’s Elissa Poma told us about her experience in the lake during a WWF’s trip to Micronesia.

WWF Travel: How do you get to the lake?
Elissa Poma: We motored by boat to the island and checked in at the ranger station. From there you have to hike along a trail. It takes around 15 minutes to go up and another 10 minutes or so to get down to the lake.

I wouldn’t classify the walk as easy—definitely a moderate hike, but very short and not too difficult, thanks to the stairs that the national park service carved into the limestone island. Limestone can get a little slippery, and some of the steps are steep, but there are ropes to hold onto. We did just fine wearing rubber-soled sandals, which we left on a lakeside dock.

WWF: What was your first perception of the lake?
EP: Upon approaching the lake, I was immediately taken by how quiet it was. Besides our group of 16, there was another small group of Japanese tourists, but everyone was eerily silent. And swimming so gently that you barely heard a splash.

About two-thirds of the lake was shaded – the rest was lit by a gorgeous, golden sunlight that envelopes the Palauan islands in the late afternoon. The whole lake was sheltered by tall trees, so it had a sunken-in feeling, too.

WWF: So then you got into the water?
EP: Yes, I climbed down the small ladder from the dock. I swam toward the rest of our group. Or doggy-paddled, more like it. You’re not allowed to wear fins, because the lake is so packed with fragile jellyfish – a fin blade would slice a jellyfish in two with little effort.

At first I didn’t see a single jellyfish – just a few sardine-sized silvery fish, which are the only other inhabitants of the lake besides the jellyfish.

Then, an orange orb appeared. Then another. And another. Suddenly, it was like swimming in a lava lamp—all these gelatinous blobs undulating around me, bouncing off my arms and my head and my feet. It reminded me of those films you watched in science class as a kid showing what gas molecules look like—bouncing off one another, moving at different speeds and in different directions.

I think we spent 45 minutes in the water. I lost all sense of time and place because it was an experience unlike anything I’ve ever had in my life.

WWF: What was the water like?
EP: Like a slightly murky, emerald-colored bath. The water was warm—slightly chillier in the shaded parts of the lake, where the jellyfish like to congregate, but still tropical. The color is a rich blue-green color, glistening with nutrient bits picking up sunlight. It all made for a nice contrast for the marmalade-colored jellyfish.

Interesting enough, it’s highly dangerous to go more than 50 feet deep, because the bottom portion of the lake is a giant layer of hydrogen sulfide. For that reason, scuba diving is prohibited.

WWF: Are the jellyfish really stingless?
EP: Technically, these jellyfish do possess stinging cells, called nematocysts. But the cells are so small that human tissue can’t perceive any stinginess—perhaps just a little tingle on thin layers of skin, like when a jellyfish brushed one WWF snorkeler’s lips.

Having spent every summer on the Jersey shore and thus encountered my fair share of the stingy kinds, I was definitely skeptical of this before I got into the water. But trust me: The only thing you’ll feel is that you’re experiencing one of the most astounding moments of your life.