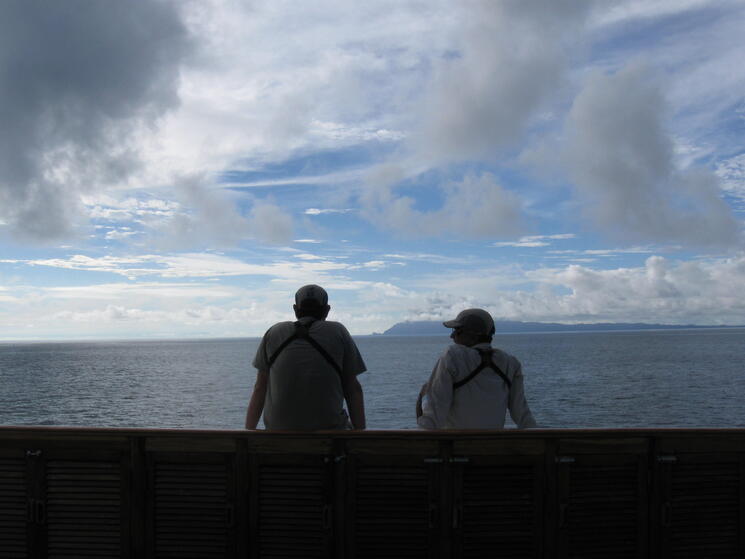 During a trip to the Galapagos this past April, I was at times overwhelmed by the incredible wildlife and breathtaking vistas. But I was curious to hear a different perspective, one from people who had experienced the “enchanted islands” for years as opposed to days. So I sat down with the expedition leaders for my trip, Roberto Plaza, who began guiding in 1994, and Giancarlo Toti, a guide since 2005.

Marsea Nelson: How have you seen the islands change during the time you’ve been guiding tours here?

Roberto Plaza: The towns have grown, but the far off places are the same or better. We used to see herds of goats [an invasive species].

Giancarlo Toti: The vegetation in Santiago has improved. It’s amazing. It had previously been barren because of the goats. San Cristobal has grown but not in a negative way, in a nice way.

RP: It grew at a slower pace, so there was more responsible planning.

MN: What is your favorite animal to see here?

GT: Seeing blue whales is always really special, they are so mysterious.

RP: When we see whales, it’s always unexpected. With other species, you have a much better idea of when you’re going to see them and where.

When we find orcas hunting, that is something really special.

GT: Or when we find whales and a small calf.

MN: Which is your favorite island?

RP: It depends on the time of year.

GT: For me it’s Genovesa.

GT: Because of the sea birds breeding: frigatebirds with their red pouches inflated, Nazca boobies with their really young chicks. And the lush vegetation there.

RP: Genovesa is definitely a highlight, but I like the western side of the Galapagos a lot—it feels more remote and you see the classic animals of the Galapagos: iguanas, penguins, cormorants.

MN: What is the biggest challenge of leading tours in the Galapagos?

GT: Making sure people are following the rules, like staying on the trails. And connecting people to the places we’re visiting. So many people are here, but their minds are back home. It’s a challenge.

RP: Sometimes it’s not possible because they are not ready.

MN: Why do you like working in the Galapagos?

RP: I like to feel pure nature; it’s such a fantastic sensation. And I like helping to make people more aware of the importance of nature.

GT: For me, it’s a privilege because there aren’t many pristine places like this on the planet. I give thanks every single day. That’s the truth.