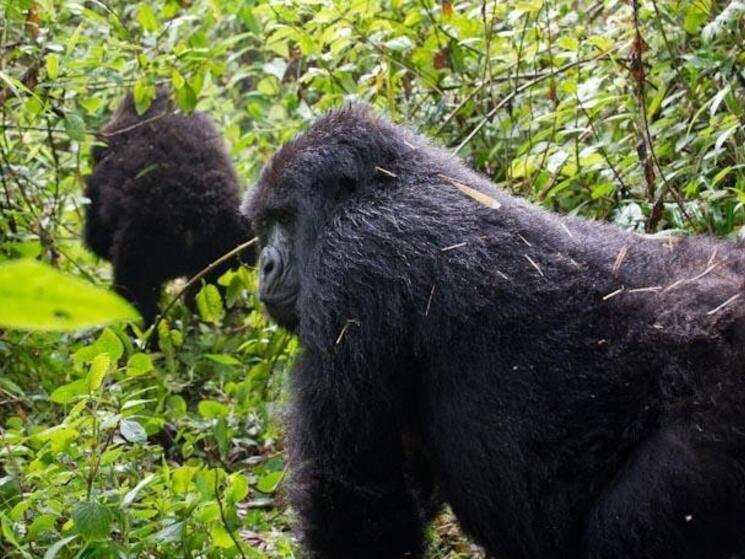 WWF’s Whitney Kent recently traveled to Africa with her family to see mountain gorillas in the wild. We caught up with her to talk about the experience.

WWF Travel: How long did you have to hike before spotting the mountain gorillas? Was it a difficult climb?
Whitney Kent: We did two gorilla treks in two separate days. The first trek was only about 45 minutes, and it was a pretty easy hike. Most of it was through hilly farmland. It wasn’t until we got closer to the gorillas that we started trekking through the forest. Some parts of the forest were cleared out into a path while other parts were dense and our trackers had to machete through.

The second trek was a bit longer and higher into the mountains, but we didn’t have to venture too far into the forest to see a huge group of mountain gorillas.

WWF: How many people were in your group?
WK: They kept the groups small to a maximum of eight people with a guide and maybe three trackers.

WWF: What was it like when you first came upon the gorillas?
WK: It was one of the best experiences of my life. I felt like it was a dream and that the gorillas weren’t real. We were so close to them at some points that I could have easily touched one (I was definitely tempted to but obviously I would have gotten in big trouble). It was incredible how human-like their movements and mannerisms were.

WWF: How long did you watch them for?
WK: We were allowed to watch them for one hour, but I could have stayed all day! The park only allows one group to visit each gorilla group once a day.

WWF: What kind of behavior did you observe?
WK: The first day it rained and the gorillas are pretty inactive when it rains. They do a lot of sitting under trees to shield themselves from the rain. We saw a mother gorilla sitting covered by a bunch of tree branches with her arms folded. She just looked at us but didn’t seem to care we were there. At one point she shifted her arms a little and we realized that she was actually hiding her tiny baby under her arms to protect him from the rain. We didn’t even know a baby was under there until she moved!

The second day the rain held. We were walking through the forest and then suddenly came upon a clearing where about 15 gorillas of all ages. Most of the gorillas were eating and some would put their mouths to the ground and pull up roots. That was pretty funny. There were also a few mothers with babies hanging off of them. The kids were eating and running around playing and the one male silverback just sat with his arms folded, watching everyone. As we were winding down on our hour with the gorillas, the silverback got up and started walking toward us. That was when we got to see how truly huge this animal was. He sat right in front of us, almost like he was posing, and stared at us. Of course half of us were frozen and the other half were clicking away with cameras. He then got up after a minute or so, and walked off. Slowly the rest of the group followed him single file. We followed the group into the forest and then moved to the side as the rest of the group walked right by us. They hardly paid any attention to us. I was kneeling so I got to see eye to eye with them as they walked by.

WWF: Did anything surprise you about the encounter?
WK: The first day as we were watching a few of the gorillas hide from the rain, we heard this raucous in the branches above us. All of sudden a huge silverback came flying down on one of the vines right in front of us, like something out of Tarzan or King Kong, knocking me off balance into one of the trackers! If I hadn’t fallen backwards, he would have definitely hit me! Then he stood right in front of us and beat his chest as if to say, “I’m the boss here.” Then he ran off leaving all of us stunned.

WWF: Did they appear to notice that you were there?
WK: They really didn’t seem to care or notice we were there. They would look at us for a bit then continue on their daily business.

WWF: Did you ever feel in danger?
WK: Surprisingly I don’t think any of us felt in danger (except maybe when the silverback came swinging down on the vine). I think part of that stemmed from the calm demeanor of our trackers and guides. Nothing seemed to faze them so that set the tone for the rest of us.

WWF: Many say that seeing mountain gorillas in the wild is a life-changing experience. Would you agree?
WK: Yes! I would totally recommend it to anyone. It’s definitely a lot of travel but completely worth it!

WWF: Any tips for those going on a mountain gorilla trek?
WK: Rain gear! Even if the weather looks fine before you embark on your hike, it rains a lot more the higher you get. My rain pants saved me the second day. Even though it didn’t rain, everything is very wet. The pants also allowed me to sit and kneel on the ground to get even closer to them.