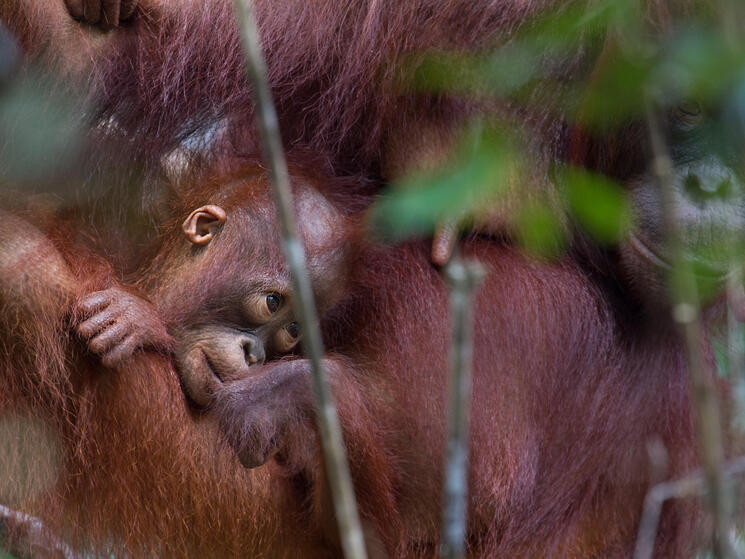 Her early years were spent under a thatch roof hut in one of the wildest corners of the planet. Eyes constantly peeled for poachers and leeches alike, Biruté Mary Galdikas quickly got used to her surroundings in the Bornean rain forest, where she has resided for most of the past four decades to study orangutans.

Life has changed considerably since Galdikas’s early days as a pioneer of orangutan study and conservation—her small bastion in the forest has developed into one of the top orangutan rehabilitation centers in the world, and, like Dian Fossey and Jane Goodall, Galdikas is a foremost expert in her field.

Yet threats continue to plague the endangered primate, Galdikas told WWF’s Marsea Nelson in an interview from Camp Leakey, Galdikas’s research facility in Tajung Putting Reserve in Central Borneo, which WWF members can visit during our Faces in the Forest: A Borneo Voyage tour.

WWF Travel: You’ve described the situation facing orangutans as “catastrophic.” How do you stay motivated to continue with your work?
Biruté Mary Galdikas: When I stay at my home in the forest at Camp Leakey, I see the results of the rehabilitation and release work I began 41 years ago. I see orangutans that we released 40 years ago still alive and living good lives in the wild. I am reminded that all the orangutan orphans currently under our care deserve the same tranquility and freedom that these orangutans at Camp Leakey now have. This motivates me to continue our work to ensure that all the orangutans under our care will eventually return to the wild.

WWF: After four decades of study, are you still learning things about them?
BG: Absolutely! I continue to learn about the spectacular spectrum along which orangutan behavior exists. Each orangutan teaches us about the wide variety of personality and capacity for intelligence—and complex emotions that are typical of the species.

Orangutans are asocial, not anti-social and sometimes gregarious. They are tool-users and even tool-makers with cultural traditions. It would have been difficult to sample all this complexity over the 40 years that I have been studying them in the wild. So almost every day orangutans teach me something new.

WWF: Have you found that people’s opinions about orangutans have changed over the years?
BG: When I first started my work, most people had no idea how orangutans were different from the other great apes or even monkeys. People thought orangutans lived in Africa and had black hair. Many thought they were a type of gorilla!

Now, in Indonesia specifically, people are much more aware of orangutans and their need for forest, as well as the Sumatran species’ status as critically endangered. In North America, virtually every educated person knows about orangutans. Ironically, Clint Eastwood’s movies [1978’s “Every Which Way But Loose” and its 1980 sequel “Any Which Way You Can”] with “Clyde” were very helpful in this regard!

WWF: Do you think the 2011 film “Born to be Wild” had an effect on orangutan conservation?
BG: The film has certainly raised awareness of the work of Orangutan Foundation International [which Galdikas started in 1971]. This seems to have led to an increased awareness of the orangutan’s plight and the continuing destruction of tropical rain forests which are the orangutan’s only habitat. International and national attention to these issues will, hopefully, trickle down to concrete improvements on the ground. The power of Hollywood should never be underestimated.

WWF: You often either escort or meet with visitors to Camp Leakey. Why do you think it’s important to be personally involved in this way?
BG: Camp Leakey is the one place on the planet where great apes and people are totally equal! It is an inspirational place that ignites people’s imaginations and allows them to go on spiritual journeys of their own. I always like to meet visitors to hear where they are from, to understand their interests in orangutans, and their motivations in coming to see Camp Leakey. I feel proud of having created Camp Leakey and privileged to be able to share it with visitors.

WWF: What do you think most surprises visitors who come to Camp Leakey?
BG: What surprises and even shocks visitors is that the orangutans are so big. One male, Tom, weighs over 300 pounds! And that interactions with the orangutans seem perfectly natural. An orangutan female with her infant walks a few feet away from you, the human visitor, and gives you barely a glance—as though it was the most normal thing for a human being to be sharing her forest habitat in the middle of Central Kalimantan.

WWF: If there was one take-away you want people who visit Camp Leakey to come away with, what would it be?
BG: Orangutans need the forest. If we continue to allow the destruction of their rain forest homes, orangutans as populations in the wild will disappear within the next 20 years! Solitary, isolated orangutan individuals will continue to survive, possibly even decades, after the wild populations have been decimated since orangutans have been known to live over 60 years of age. But orangutans as forces of nature and as populations in the wild will be long gone.

Travel with WWF to Camp Leakey during our Borneo Voyage.