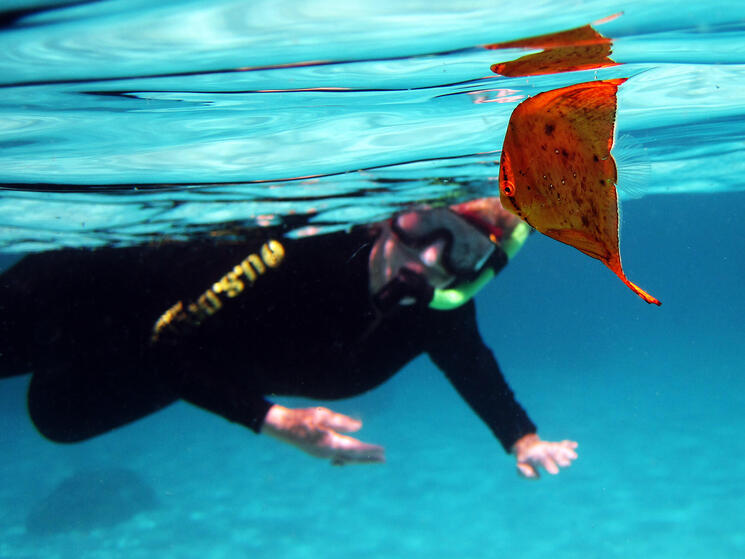 Originally from Philadelphia, Lee Goldman’s journey has at last led him to the Philippines. Here Lee’s three passions bundle together perfectly--marine biology, conservation and guiding--bringing the underwater gardens to life for lucky WWF travelers.

WWF Travel: Where did your love for marine life first begin?
Lee Goldman: At a young age, I never just thought, ‘oh I love the marine environment, Jacque Cousteau is my hero.’ It was never like that. What motivated me to study marine biology was the freedom that nature represents. After high school, I stumbled upon the artist Robert Lynn Nelson; he paints killer whales, the Hawaiian environment and coral reefs. One in particular, The Sea of Magic, really captivated me. I thought, ‘that’s what life is about.’

In college, I studied killer whale behavior near the San Juan Islands.

It was boring as hell. I know what you’re thinking --studying whales must be exhilarating--but we only saw them five minutes out of the day. Data input and waiting for whales gobbled up the rest of our time.

Then I got into diving. The ecology of the reef began to make sense.

WWF: What motivated you to write a book, Snorkeler’s Guide to Marine Life of the Philippines?
LG: At the end of each day, I like to give mini-lectures on what guests saw while snorkeling, nothing too dry. Through these lecture slideshows I’ve accumulated tons of photos. This book is practical; it can be easily stowed away in preparation for a trip. However, don’t expect to find tiger sharks or pygmy sea horses; this guide focuses on shallow marine life, creatures that a snorkeler might see on an outing.

Specialized guidebooks are all the rage lately, but who can take 30 books with them when they’re out on a boat?

In the Philippines, there is no separation between Filipinos and the reef. They fish in the waters, they show travelers the beauty of their islands, and much of their fresh food is gathered from island or, if bought from the store, isn’t packaged the way it might be in Europe or the US. They see the direct impact of the reef on their life.

I also highly recommend WWF’s Komodo Snorkeling Adventure. The Komodo National Park in Indonesia is unique; the islands are seemingly barren, life is nonexistent, but when you get in the waters, an unexpected underwater garden will feed your visual appetite

WWF: How have you linked your guiding work with some of your more academic and conservation-minded passions?
LG: Guiding is a win-win for me. I want others to experience the reef. I love taking people out into this environment who are interested in it. I feed off of their excitement and they feed off of mine; it’s a mutualistic relationship. Having new guests keeps it fresh for me. In the end we want a traveler to go home and say, ‘It’s worth saving.’

WWF: How would you encourage snorkelers and travelers to be more conscientious and good stewards of the environment?
LG: We often underestimate the power of influence. Your excitement about change on an individual level will spread to others who can then influence others. Think of actions you can easily control such as reducing the amount of waste you’re creating. Use fewer plastic bags--plastic bags often end up in the ocean, swallowed by animals, releasing toxic chemicals as they decompose, or entangling animals in the debris.

These are bigger problems than you might think, but a good example of how we can create change through a combined effort.

WWF: What’s been the best example of conservation work in the Coral Triangle?
LG: There are at least 50 trained local guides in the Donsol area. This is perhaps one of the best conservation success stories in the country. In the Donsol area, known for one of the largest whale shark populations, WWF has trained locals and fisherman to guide and work with whale sharks. The Philippines are known for its migratory worker population; if an area begins to attract jobs, people flock to the area looking for work.

Conservationists didn’t want to take this precious resource out of their hands. If the area became a popular tourist attraction, they feared that foreign suppliers would begin to come in and take advantage. So the WWF set up a program ensuring only the Donsol had the right to work with whale sharks. Retraining fisherman to work within this community-based eco-tourism program also magnifies the positive impact of the program to reduce overfishing.

Travel with the WWF on a Komodo Snorkeling Adventure.

A Biodiversity Hotspot in the Philippines

Ten Things to Take on Your Snorkeling Adventure

Behind the Lens: Shooting Underwater