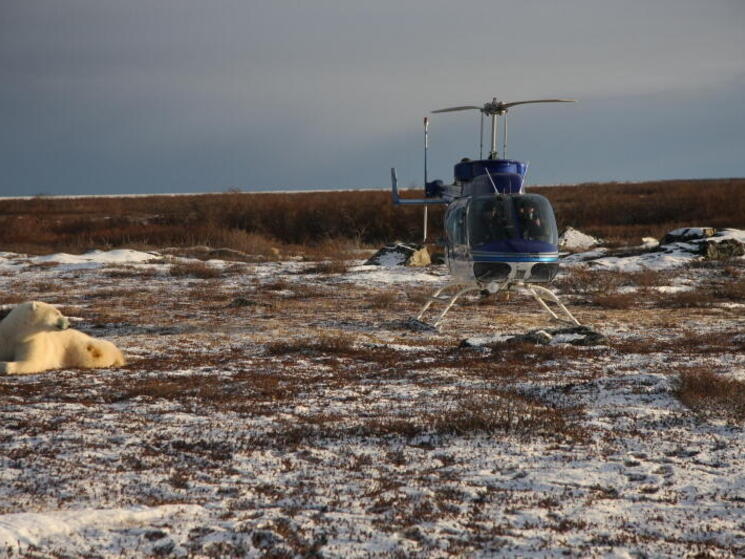 Geoff York is coordinator of WWF’s Polar Bear Conservation Program, researching the animal that has become a strong symbol for climate change. York spoke with WWF Travel about his field work and what it's like to see polar bears in the wild.

WWF Travel: How did you become a polar bear biologist?
Geoff York: I wish I could tell you that I dreamed about working on polar bears as a child, but that was far from my thoughts in rural Indiana! My first biology job was working on Arctic fish in the Beaufort Sea, followed by graduate work on the ecology of glacial stream systems that in turn led to general marine mammal work and finally to polar bears. I have lived [in Alaska] since 1990.

WWF: How much time do you spend in the field?
GY: It’s a lot less than people imagine. It turns out to be about two months a year. With polar bears, there’s a short window of time when they can be safely and efficiently captured and studied.

WWF: When do you go?
GY: We used to do one month in the spring and one month in the fall. But in the fall we don’t have good enough ice to work on anymore during times of year with enough light to make the effort worthwhile. This spring, the sea ice was thinner and more active—noticeably so. There’s so much more open water than I have ever seen. We often didn’t have a stable platform to work on.

WWF: What does field work entail?
GY: Each day, we head out to the sea ice [by helicopter] and begin searching for polar bears. Once we locate a bear, we sedate it with a dart gun from the air. We do standard measurements, [such as] weight and length. We collect a variety of biological samples—a vestigial tooth for [determining age], blood, serum, hair, fat and feces. Every bear captured for the first time is tattooed and receives ear tags so that it can be identified in following years.

WWF: Have you ever had a close call?
GY: I’ve been charged by polar bears on two occasions. Once, a colleague and I were about to explore a den we thought was vacant. But a mother bear and two cubs were in there. She charged us and I fell backward. I yelled as loud as I ever have in my life. The bear halted then ran off when our helicopter engine started. I wasn’t hurt, fortunately. Clearly polar bears are quite capable of doing harm, but my encounters have been benign.

WWF: What’s the biggest myth people have about polar bears?
GY: It’s thought that polar bears are fierce predators and man killers. My experience has been quite different than that, and most polar bear scientists would say a similar thing. In the past 100-plus years in Alaska, there was only one human fatality by a polar bear. And that human was doing something he shouldn’t have been doing.

See polar bears in the wild with WWF.