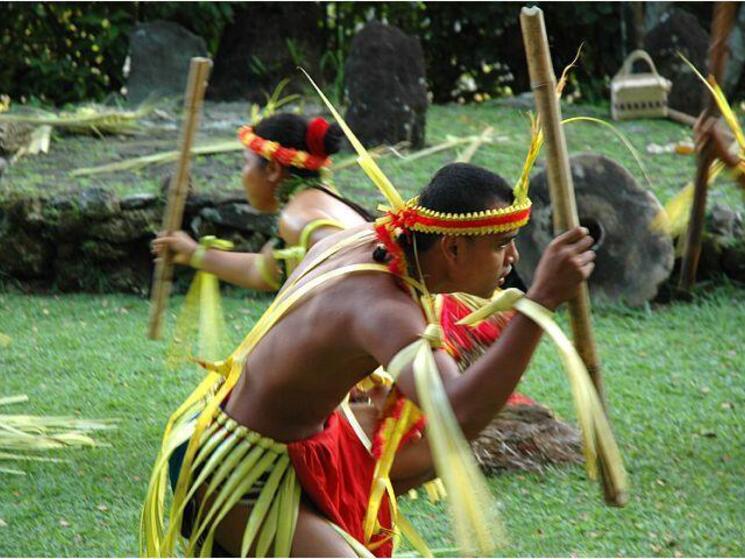 In our latest School of Thought installment, WWF’s Elissa Poma and Marsea Nelson tell us what they learned after visiting the southern Pacific paradise of Micronesia.

1. The red-stained lips and teeth of many locals is not the result of chugging too much cherry Kool-Aid. It comes from chewing betel nut, a common practice in many countries throughout Southeast Asia and the South Pacific. The betel nut has a mild stimulant effect and allegedly reduces appetite and stress (and it’s also thought to cause cancer). The practice was fascinating—though hard to get used to seeing so many men and women spitting gooey red blobs openly in the streets. And, much like smoking a cigarette for the first time, it didn’t taste so great.

2. To enter a village in Yap, you must break off a small piece of a leafy branch and carry it in your hands. That indicates to the villagers – who tend to shy away from foreign travelers anywaythat you come in peace.

3. Traditional stone money called rai is still exchanged during ceremonies (like weddings) or when—transferring land titles. This is even though the U.S. dollar is the standard currency used in Yap. It would take 20 men to lift the largest “coin” on the island.

4. Ceremonial dances could very well be the most important part of Yapese culture. In fact, children begin learning the art form of “churu” even before they can speak, and some dancers rehearse for up to a year before an important performance. The dances tell the stories of Yap’s history – the importance of the development of the canoe, for example, or a vital conquest over the years.

5. It’s highly dangerous to go more than 50 feet deep in Palau’s Jellyfish Lake. This is because the bottom portion of the lake is a giant layer of hydrogen sulfide. For that reason, scuba diving is prohibited.

6. It’s important to test equipment before a big trip. A couple weeks before the tour, I went to my local pool and tried out my new mask, snorkel and fins. The mask didn’t fit, and I was able to replace it in time. Sure, I felt silly snorkeling in an indoor pool, but I would have felt even sillier going all the way to Micronesia with an unusable mask.

7. You can’t buy a tourist T-shirt on Yap. That might be a bit of an exaggeration, but not by much. We went to at least three stores looking for shirts and had no luck. Even though it was disappointing, there’s something amazing about being in a place that remote. The island also has no traffic lights.

8. Peleliu was one of the deadliest battles of World War II. Considering this, I was surprised that I’d never heard of it before. We spent an emotional day visiting the island’s historical sites.

9. I love manta rays. I didn’t realize how amazing this species was until I snorkeled above a 15-foot female for at least 20 minutes. The ray was at a “cleaning station,” circling around and around just above the sea floor while cleaner wrasse removed small parasites from its skin. Afterward, I knew nothing could top the experience.

10. Actually … there is something that can top seeing a 15-foot manta ray. When we first entered the water at Jellyfish Lake, everyone was hesitant to swim further into the body of water where the main concentration of jellyfish was, even though we knew they couldn’t sting us. Finally, with our guide’s encouragement, we all swam further. As soon as I felt the jellyfish globes lightly bouncing off of me from every direction, I started to laugh. I couldn’t stop. It was such a strange and otherworldly experience and definitely the highlight of an unforgettable trip.