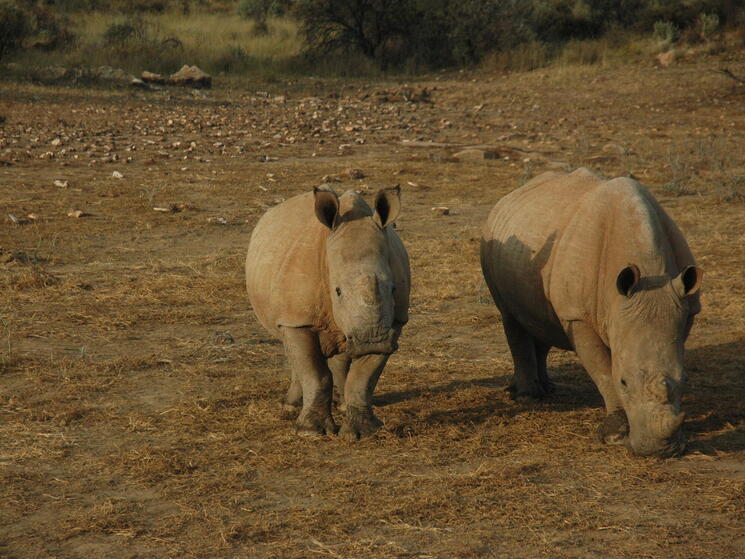 After visiting Namibia recently, Elissa Leibowitz Poma, Deputy Director of the WWF Travel Program came back armed with stories, ideas and newfound knowledge about wildlife, foreign languages and how she came to embrace dust.

1. Black rhinos have a more sensitive disposition than white rhinos. Among several reasons why, according to Jeff Muntifering of the Save the Rhino Trust in Namibia, is the fear of being hunted. White and black rhinos alike have been poached for decades, but black rhinos, which are more solitary than white rhinos, appear to have passed along knowledge of that practice in their genetic code as a survival mechanism.

2. The San click languages spoken by some bushmen is quite difficult to pronounce. A language originating with the hunter-gatherers of southern Africa as they traversed their ancestral lands, the languages and various dialects are still spoken by about 100,000 people in Namibia and Botswana (and small groups in Angola, Zambia and Zimbabwe). The one I tried learning consists of four click styles, depending on the placement of your tongue in your mouth. The clicks themselves weren’t so hard to form, but connecting them to words twisted my tongue in knots!

3. Giraffes are the best models in Namibia. You could be driving along a road, nothing around you but sand and rocks, and then all of a sudden a giraffe neck and head pops out from behind a grove of trees. The giraffe would hold your gaze, nibbling on some leaves but intently watching you from beneath impossibly long eyelashes. (They're that long for a purpose, by the way: To keep insects, debris and sunlight out of their eyes.)

4. There must be a better word to describe a springbok’s leap than “pronk.” Springboks and other gazelles exhibit this behavior when they’re being pursued by prey or otherwise feel a need to get out of Dodge quickly. It’s an elegant, ballet-like move that allows the springbok to gain extra distance, and surely the motion deserves a more elegant, ballet-like word.

5. You must succumb to the dust. Namibia is a desert. It’s hot. It’s dry— Arizona seems like a rain forest by compare. So you must accept the fact that the dust will coat every inch of you—covering every centimeter of your skin and clothes, coating each strand of hair, lining the inside of your nose. Instead of resisting it, I embraced it. It made me feel like a part of the magnificent, stark landscape.

6. It’s hard to eat game after watching it all day. Game meat is a way of life in Africa, and ostrich, zebra, kudu and other mammals frequently show up on menus. I recognize the realities of the world, and I’m not a vegetarian in “real life.” But for me, there was something quite difficult about watching dapper oryx walk across the valleys all afternoon, then mustering any desire to eat a steak of it for dinner. I was surprised by my reaction, actually. I stuck with pasta and veggies for dinner.

7. The adornments that Himba women wear all have practical purposes. The Himba are a semi-nomadic ethnic group in the Kunene region of northern Namibia who have maintained a traditional tribal lifestyle. The women we met in a small village were coated head to toe in otijze, a paste made of butter fat and the natural pigment ochre. The coating gives them a rust-colored, shiny glaze, which not only beautifies them in the Himba way (the rich red color symbolizes blood and life), but also provides sun protection. Likewise, women wear beaded anklets, to prevent snake bites.

8. I have a new appreciation for asphalt. After spending hours each day in a vehicle bumping along dry riverbeds, rock-strewn trails and paths formed by elephants, I hereby declare I will never complain again about potholes in Washington, D.C.

Travel to Namibia with WWF.