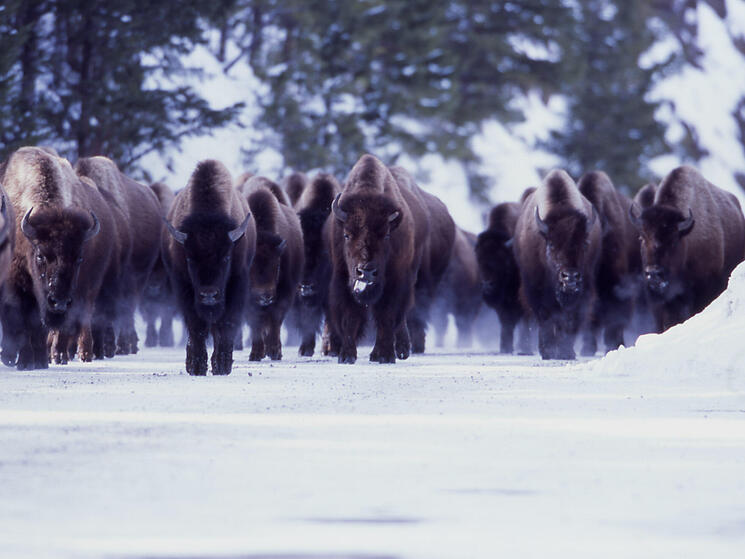 A wintertime visit to the largest national park in the continental United States provides an extraordinary experience with many unexpected advantages. For travelers wanting a pristine environment with few crowds, good wildlife sightings and interesting modes of transportation, Yellowstone National Park in January is an ideal destination.

1. Crowd control: Winter is a great time to escape crowds. According to the National Park Service, the winter of 2009 saw fewer than 87,000 people in the park, vs. approximately 1 million during each of the spring, summer and fall.

2. Enjoying the silence: With little infrastructure and few wintertime visitors, Yellowstone possesses a seemingly mystic silence that's only possible to experience in such a purely remote setting. It’s further preserved by the National Park Service, which limits the number of vehicles entering the park each day.

The silence allows you to tune in to sounds you might not normally be alert to—the crack of a frozen waterfall, snow tumbling off a tree branch, the howling of distant wolves at dawn.

3. Contrasting colors: Some of the best wildlife sightings may occur as a result of the color contrast between the animals and the bright white snow. There are almost 60 species of mammals in the park, including bison, elk, mule deer, gray wolves and moose.

4. Down from the hills: During the winter months, elk and other animals descend to lower elevations and thus can be more visible. As Yellowstone is home to thousands of elk, visitors often have a chance to observe them pawing through the snow for their winter food—mainly grasses and twigs—and resting atop the snow.

5. Faithful activity: Regardless of air temperature, Yellowstone’s 300 active geysers—including the most well-known, Old Faithful—spout water topping 204 degrees Fahrenheit into the cool crisp air. The geothermal activity helps all wildlife, from the smallest insect to the largest mammal, thrive in the winter.

Elk use areas of melted snow for easy foraging. Small ephydrid flies congregate around hot springs for warmth. And despite their thick skin, heavy hair and layers of fat to keep them warm in the winter bison, too, congregate around geothermal waters to absorb the heat.

6. Snow coaching: The National Park Service doesn't plow many interior roads during heavy snowfalls, thus they are closed to vehicular traffic during the winter months. Only over-the-snow vehicles are permitted. This affords a rare chance to traverse the park via a mode of transportation not many travelers get to experience: the snow coach.

A snow coach resembles a van but has snow-equipped tires. This comfortable and heated means of transport offers a clear view of the surroundings while moving easily across the snow.

7. Photographic challenges: Winter provides a welcomed challenge to photographers. Because the average snowy scene is filled with colors lighter than a medium gray, most winter photos appear overexposed. To combat that, use graduated filters to tint the sky. Also shoot early in the morning or late in the afternoon when colors and reflections are stronger. And meter the purest white areas, opening up to 1 to 2 stops.
Visit the park with WWF on a Yellowstone Safari.
Subscribe to RSS Feeds