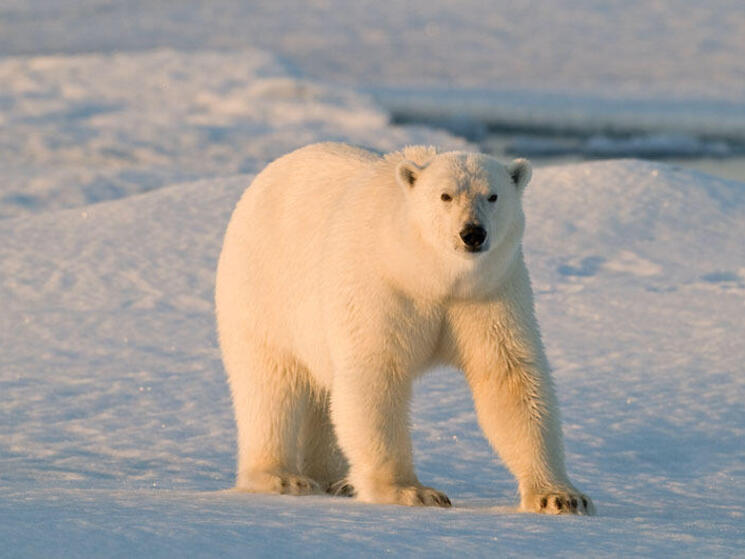 There are currently between 20,000 and 25,000 polar bears worldwide, and the species is now listed as threatened under the Endangered Species Act. WWF’s strategy to save the polar bear from extinction focuses on supporting field research, educating the public and reducing threats to the species, its habitat and its prey.

9.  Polar bears are excellent swimmers and can sustain a pace of 6.2 miles per hour by using their front paws like oars while their hind legs are held flat like a rudder.

8. Sixty percent of the 19 polar bear sub-populations are in Canada.

7.  The polar bear is the most carnivorous member of the bear family, feeding mainly on a diet of ice seals.

6. When born, a polar bear cub weighs about the size of a guinea pig.

5. A polar bear’s stomach can hold the food equivalent of 15 percent to 20 percent of its own body weight.

4. Polar bears like to keep themselves clean, as it probably helps the insulating properties of their fur. After feeding, they will usually wash themselves by taking a swim or rolling in the snow. They also roll in the snow to cool off—despite the harsh conditions of their environment, polar bears overheat easily.

3. Less than 2 percent of a polar bear’s attempted hunts are successful.

2. The most common method of hunting by polar bears involves the bear locating an active breathing hole using its keen sense of smell (i.e. a place where the seals are currently surfacing to take in air).

1. If current warming trends continue unabated, scientists believe that polar bears will be vulnerable to extinction within the next century.

See polar bears in the wild with WWF.