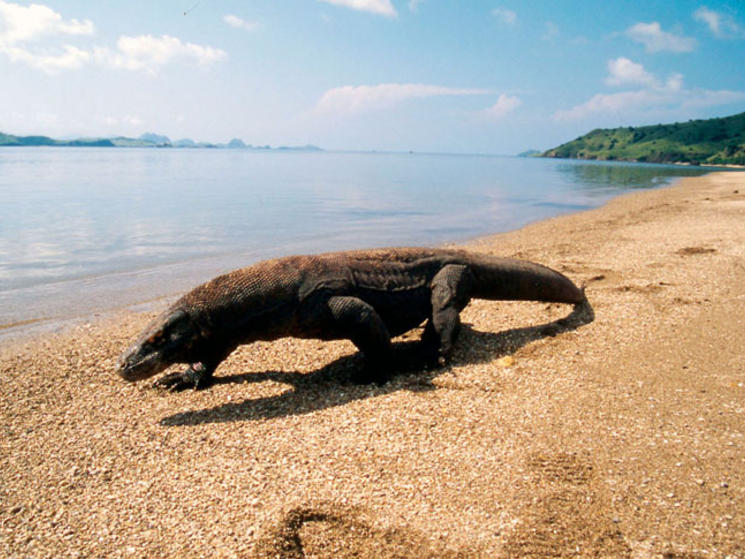 Hungry for power food—Komodo dragons dominate the Indonesian islands they inhabit, prowling the tropical islands with a commanding ferocity.  It’s no wonder the Komodo dragon has inspired some of the most fear-inducing monsters in Hollywood history.

Classified as a vulnerable species on the International Union for the Conservation of Nature Red List, there are an estimated 4,000 to 5,000 Komodo dragons in the wild.

10. The Komodo dragon is the world’s largest living lizard species; it can grow to nearly 10 feet long and average 150 pounds (though researchers have discovered some weighing in excess of 300 pounds). Because the islands they inhabit have no other carnivorous wildlife, they dominate that wedge of the food chain, thus leading to their “island gigantism.”

9. Komodo dragons are suspected to have thrived for millions of years, yet they were only discovered less than 100 years ago.

8. Komodo National Park was established in 1980 to protect the vulnerable species from poaching and human encroachment, among other threats.

7. Female dragons lay their eggs in the abandoned dug-out nests of the chicken-like megapode. Numbering up to 30, the eggs incubate for around nine months.

6. Possessing moderately poor vision and hearing, a monitor lizard uses the sense of smell as its main food detector. It has a forked tongue that “samples” the air, processing the scent through specialized organs on the roof of its mouth—much the same way a snake does.

5. A Komodo dragon can swallow whole prey the size of a goat. It takes 15 to 20 minutes to do so. Sometimes a dragon will ram the carcass against a tree to help push it down its throat—the force it uses to do so is so powerful that the tree sometimes falls down.

4. Because of an immensely slow metabolism, the monitor lizard can subsist on as few as 12 meals a year.

3. Researchers debate whether the venom in a dragon’s mouth contributes all that much to a prey’s death. More significant, some scientists say, is the shock and blood loss that results from the bite. The Komodo dragon has 60 curved, serrated teeth that pack a punch.

2. Baby Komodo dragons are vulnerable to cannibalism by adults, which comprises 10 percent of its diet from comsuming its species' young ones. As a result, juveniles spend the beginning of their lives living in trees. Their claws make them ideal climbers, but only when young—they become too heavy to climb trees as adults.

1. Animals that escape the jaws of a dragon attack never end up lucky: A Komodo dragon’s mouth is stewing with an estimated 60 different strains of bacteria that infect a prey after a bite. Sepsis sets in within hours and death usually occurs within a day, with the dragon stalking the dying prey closely.

Travel to Asia & the Pacific with WWF.