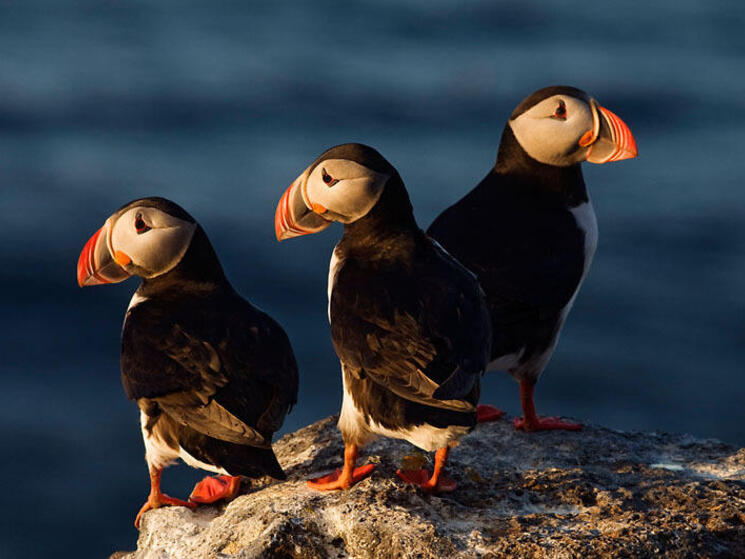 Beloved by birders and nature enthusiasts everywhere, puffins are one of the most widely recognized birds of the North. With a colorful bill that seems too perfectly painted to be real, puffins have a photogenic, cartoon-like appeal. Searching for them on an Arctic tour is a must.

9. There are four species of puffins, three of which are slightly distinguishable from one another. The Atlantic and horned puffins look quite similar, with the exception of a blue-grey triangle at the base of the Atlantic puffin’s beak. During the mating season, straw-like feathers protrude from the crown of the tufted puffin’s head. The fourth species, the rhinoceros auklet, doesn’t look like the other three – it’s ashen colored, with a rhino-like protrusion during the breeding season. But it’s still technically a puffin.

8. The puffins’ genus name, Fratercula,comes from the Latin for “little brother.” The name refers to the sea bird’s black and white plumage, which was said to resemble the robes that monks once wore.

7. A puffin weighs about the same as a can of Coke.

6. Puffins lay just one egg per year—and usually with the same mate. Like some penguins, both parents take turns incubating the egg and caring for the chick.

5. Puffins may chatter up a storm at their breeding colonies, but they remain perfectly silent while at sea.

4. There are currently eight isles around the world named Puffin Island—so named because they all are or once were home to large colonies of puffins.

3. A puffin can fly as fast as 55 mph. Compared with other auks, which tend to stay just a few feet above the sea, puffins usually maintain a cruising altitude of around 30 feet.

2. Sixty percent of the world’s puffins breed in Iceland.

1.Puffins are one of the few birds that have the ability to hold several small fish in their bills at a time. Their raspy tongues and spiny palates allow them to firm grasp 10 to 12 fish during one foraging trip. They thus can bring more food back to their young compared with other seabirds that tend to swallow and regurgitate meals for their chicks.

See puffins in the wild with WWF.