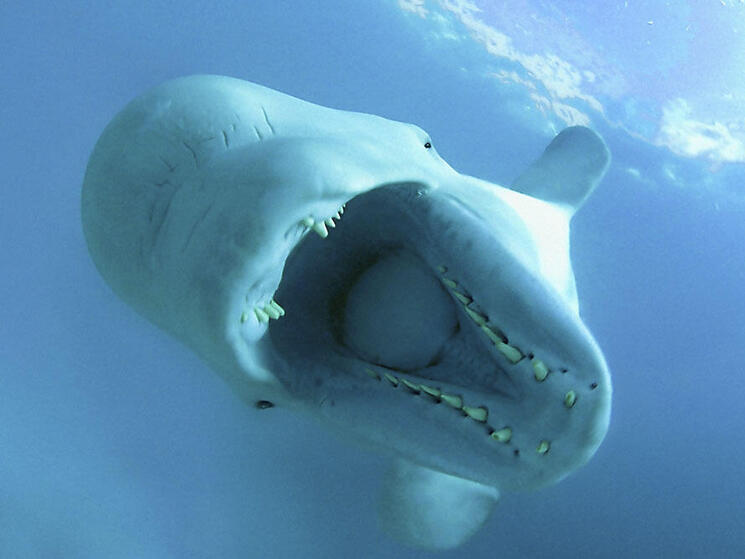 The beluga whale is easily recognizable thanks to its stark white coloring and globular head. Belugas are very social animals, and it’s possible to see pods numbering in the hundreds during a trip to Churchill, Canada.

10. Also known as "sea canaries," belugas are one of the most the most vocal of all whales.

9. The beluga is closely related to the narwhal; they are the only two members of the Monodontidae family.

8. Beluga whales' dives may last up to 25 minutes and can reach depths of 800 meters.

7. The word beluga comes from the Russian word "bielo" meaning white. However, these white whales are born dark gray. It can take up to eight years before they turn completely white.

6. The beluga is able to swim backwards.

5. The beluga can change the shape of its bulbous forehead, called a "melon",  by blowing air around its sinuses.

4. In 2009, a captive beluga whale rescued a distressed participant of a free diving competition by pushing her to the surface.

3. Belugas, like other arctic whales, do not have dorsal fins (a dorsal fin causes extra heat loss and would be a major hindrance in the arctic ice), but they do have a tough dorsal ridge. They also have a thick layer of blubber that insulates them from the icy arctic waters.

2. The vertebrae in a beluga’s neck is not fused together, giving it the unusual ability to turn its head up, down and side-to-side.

1. Threats to beluga whales include climate change, hunting, oil and gas development, and industrial and urban pollution. Polar bears and killer whales are known predators of belugas throughout their Arctic range.

Join WWF in Churchill to see belugas in the wild.