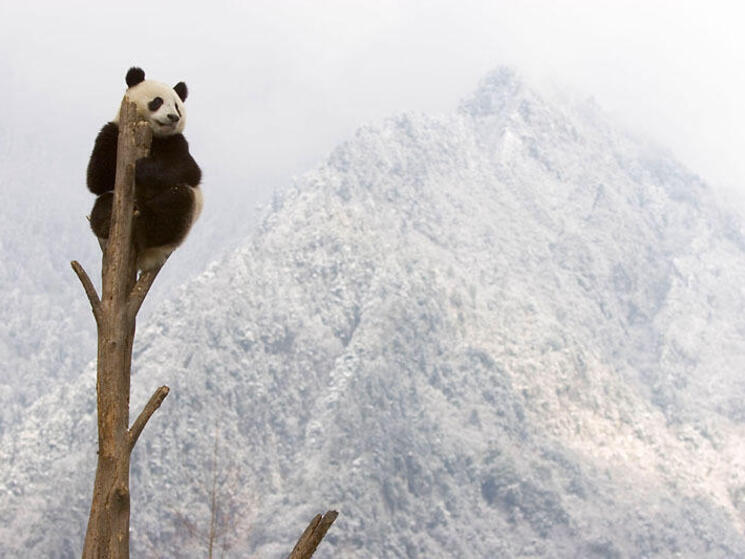 10. The first panda came to the United States in 1936—a cub to a zoo in Chicago. It took another 50 years before the States would see another.

9. A newborn panda cub is 1/900th the size of its mother and is comparable to the length of a stick of butter.

8. A panda’s paw has six digits—five fingers and an opposable pseudo-thumb (actually an enlarged wrist bone) it uses merely to hold bamboo while eating.

7. Of all the members of the bear family, only sloth bears have longer tails than pandas.

5. Female pandas ovulate once a year and are fertile for only two or three days.

4. The giant panda’s genome was sequenced in 2009, according to the journal Nature.

3. The WWF logo was inspired by Chi-Chi, a giant panda brought to the London Zoo in 1961, when WWF was being created. Says Sir Peter Scott, one of those founders and the man who sketched the first logo: "We wanted an animal that is beautiful, is endangered and one loved by many people in the world for its appealing qualities. We also wanted an animal that had an impact in black and white to save money on printing costs."

2. Historically speaking, pandas are one of the few animals whose parts have not been used in traditional Chinese medicine.

1. Approximately 99 percent of a panda’s diet—bamboo leaves and shoots—is void of much nutritional value. Its carnivore-adapted digestive system cannot digest cellulose well, thus it lives a low-energy, sedentary lifestyle but persists in eating some 60 species of bamboo. Pandas must eat upwards of 30 pounds of bamboo daily just to stay full.

See pandas during a WWF tour to China,