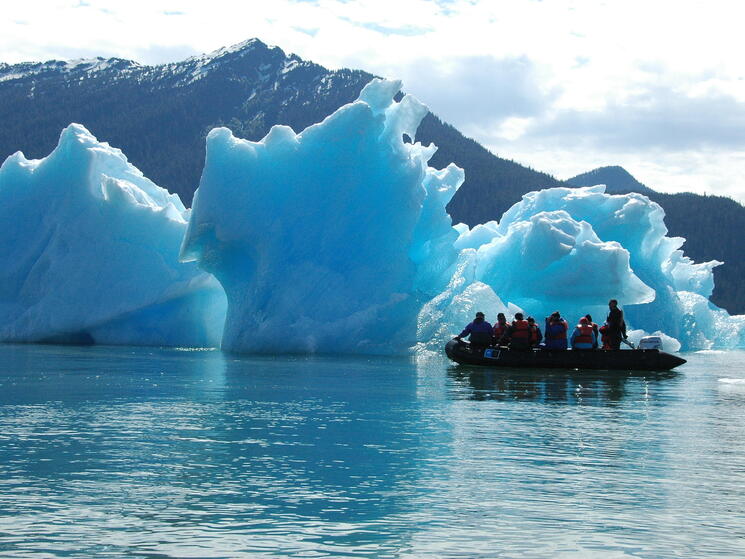 Glaciers creep their way across vast regions, spreading their hefty mass of hundreds of years of compacted snow and ice all swaths of land standing in their way.  Some glaciers appear dusty and rocky and others radiate such a brilliant aquamarine color, it looks as if they’re lighted from within by an intense halogen bulb.

All expedition travelers should see a glacier in their lifetimes. Here are 10 interesting facts about glaciers:

10. Approximately 10 percent of the Earth is covered by glaciers; during the last Ice Age, they covered one-third of the Earth’s surface.

9. Glacier ice is the largest reservoir of fresh water on the planet, storing an estimated 75 percent of the world’s supply.

8. Glaciers are found in 47 countries.

7. A glacier can range in length from the equivalent of a football field to more than 100 miles.

6. The Antarctic ice sheet is actually a glacier and has existed for at least 40 million years. If it were to melt in its entirety, sea levels would rise 210 feet worldwide, according to the U.S. Geological Service.

5. Though it sits on the equator, Mount Kilimanjaro is glaciated.

3. Mountain valleys are typically “V” shaped before being taken oven by a glacier; during glaciation, the valley widens and deepens and thus becomes "U" shaped.

2. A single glacier ice crystal can grow to be as large as a baseball.

1. Alaska is estimated to have more than 100,000 glaciers. Most remain unnamed.