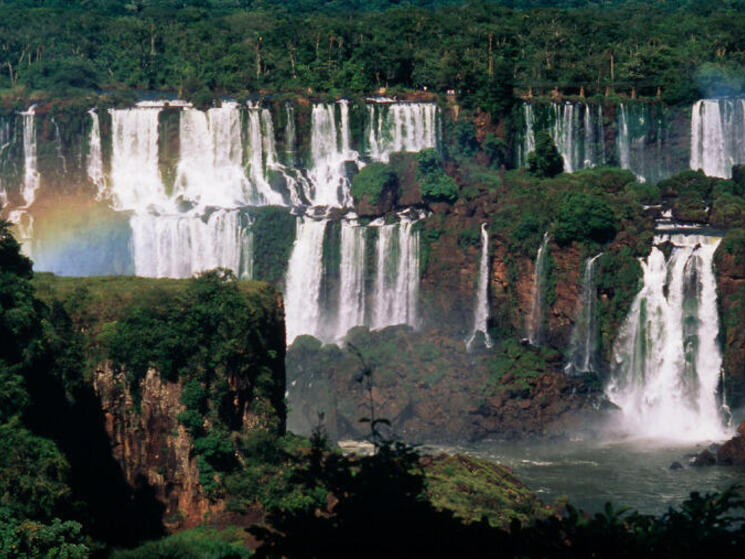 Lying on the border of Brazil and Argentina, Iguacu Falls was born millions of years ago, likely the result of a volcanic eruption and from the slow but steady movement of tectonic plates. It was simply but aptly named “Great Falls” by local Indians.

10. According to local legend, a god planned to marry a beautiful aborigine girl named Naipí against her will. She escaped from him by fleeing with her mortal lover, Tarobá, in a hand-carved canoe on the river. The god flew into such a wild rage when he found out that he split the river into two and created all the waterfalls so that the two lovers would be condemned to an eternal fall.

9. Iguacu consists of 275 separate falls. The most impressive one is a U-shaped cataract nicknamed “The Devil’s Throat,” which has 14 falls plunging more than 350 feet.

8. Iguacu Falls is wider than Victoria Falls, which segregates Zambia from Zimbabwe in southern Africa, but Victoria is considered larger because its water curtain is less interrupted by rocky outcrops and islands.

7. Great dusky swifts can be observed plunging directly into the waterfalls; in fact, the little daredevils often nest behind the falls, seeking refuge from predators behind the curtains of falling water.

5. There’s an often-photographed rainbow that usually appears stretched across the falls in a particular spot. Legend has it that a local shaman received a message from above that “I will show the world a marvelous thing,” but everyone waved off that notion as nonsense. So one night during a full moon, there was a random flash of lightning and—pow!—suddenly a rainbow appeared. Truth of the matter? The rainbow’s a result of the constant mist provoked by the thundering falls.

4. The only marsupial found outside Australia—the opossum—lives in the rain forests surrounding the falls.

3. During the rainy season (November to March), the rate of water plunging over the falls can reach 450,000 cubic feet per second.

2. At one point along the edge of Iguacu Falls, an observer can stand and be surrounded by 260 degrees of waterfalls.