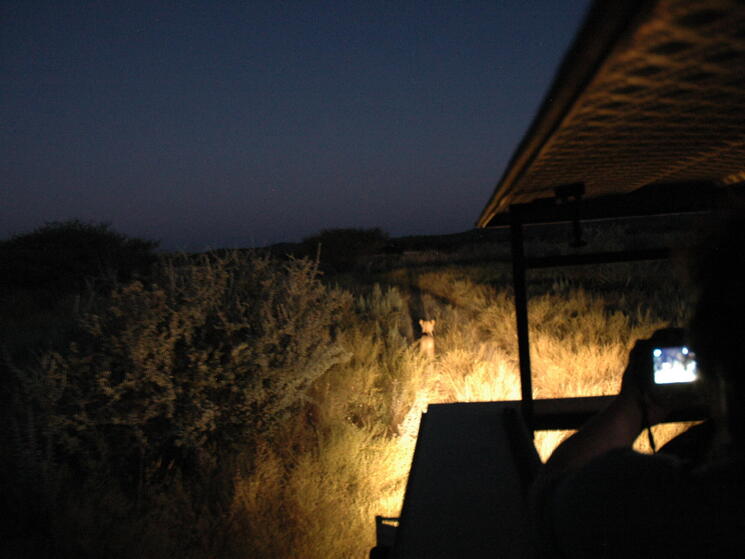 The Lions of Ongava

Finally! The jarring rattling stopped. The infinite, bouncing commute across rocky elephant trails came to a halt. No more thorny branches threatening to scar my face with a snappy whip through the windows of our trucks. No more desert dust in my teeth. Finally.

We had arrived at the Ongava Game Reserve near Etosha National Park in northern Namibia after a long desert drive. The amiable lodge staff greeted us in the driveway with fresh juice and with cool washcloths we could use to swab our dusty faces.

A crackly voice came across guide Festus Mbinga’s radio. We strained to listen.

“Get in those vehicles!” Festus instructed. We look at each other, dumbfounded. Lions? Like, right here, coming for us, right now?

Fortunately, no. Several spotters had laid eyes on fresh tracks, and they suspected a pride wasn’t too far off.

The lion was the one species we had yet to see that week in Namibia. Populations of desert-adapted lions live in the harsh, dry environment of the northern part of the country, and WWF and other conservation groups have been working to protect them. As a result, the number of free-roaming lions has grown over the years.

Adrenaline replaced exhaustion, and like firemen responding to an alarm, we grabbed our gear, piled quickly into the pop-top safari vehicle and tore off.

The truck bolted through the chest-high brush along narrow trails. The sun was setting. Twenty-four eyes served as scouts—we all wanted the bragging rights of seeing the lions first. That honor went to my new Swedish friend David. 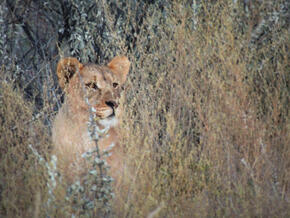 I’m not sure how he did it, but somehow, David spotted the well-camouflaged lions lounging in the ochre-colored grasses. The light was faint, but we guessed there were six or eight lionesses, cubs and adolescent males. We whispered congratulations to David as we readied our cameras.

A few of the lionesses stood up and walked along the trail; we followed them from a safe distance, our spotlights highlighting every bristly hair on their tails. They turned frequently to check on us, their eyes glowing green from the light. The young ones stayed hidden.

Natural light was nearly gone. We didn’t want to annoy them with the spotlights, so we kept our visit short.

Or so we thought.

Festus turned the key in the ignition. Nothing. Not a click, not a grind. Not a single whimper. The vehicle wouldn’t start.

Of course, these things happen when you’re off on an adventure, and the team at Wilderness Safaris kicked into action. They had a rescue vehicle to us within a half hour.

But what that meant was this: Thirty minutes in the Africa bush, surrounded by a pride of curious lions, the only natural light a thinning sliver of smoky orange glow in the distance. It was exhilarating for what we could see—a few lions in the beams of a flashlight—and what we couldn’t see, what could be lurking in the dark.

We were safe. (Right?) That lion could never jump through our vehicle windows. (Keep kidding yourself, woman). I let my mind run away for a little bit, just for the fun of it. My gut instinct, though, told me we were safe. 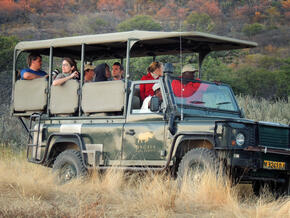 Eventually a vehicle arrived. Some of my fellow travelers hopped from one door to the other, not even putting a foot on the ground, while others climbed through the pop-top roof of our disabled truck and through the roof of the other. The lions must have found it curious; a few got up and walked around to see what we were doing.

We arrived back at the lodge, showered and reassembled for a quick dinner. Like my travel companions, I was exhausted from that long, bumpy, dusty drive across the desert, and from the adrenaline rush and crash of the evening.

There’s no way I was going to fall asleep. No way. The lions of Ongava stayed on my mind.

Travel with WWF on an African Safari.