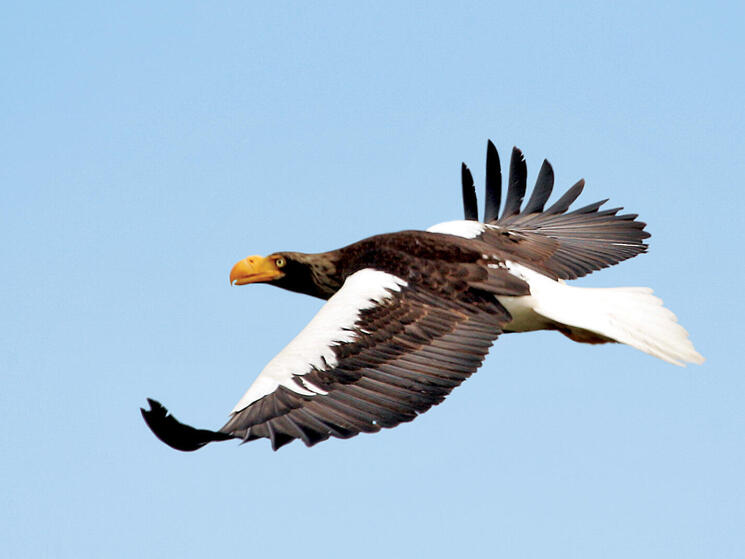 Top 9 Seabirds to See in the Russian Far East

Huge numbers of seabirds blanket the rocky landscape of the Russian Far East. The birds perch on high, windswept cliffs that rise to seemingly infinite heights, making their habitat inaccessible to other animals that would want to hunt them. As a result, the birds prosper in massive, dense colonies.

Here are our picks for the best 9 species of seabirds to see in the Bering Sea and Russian Far East:

Laysan albatross: With a wingspan of six feet, these behemoths spend most of their time at sea. They’re only found in the North Pacific.

Steller’s sea eagle: These eagles breed along the sea coasts of the Kamchatka Peninsula, hunting for fish in the shallow waters nearby. Because of abundant food supplies in the summer, the usually solitary birds congregate in large numbers along the shore.

Whooper swan: The whooper swan cannot support its own body weight for extended periods of time, so it spends most of its day floating in water. The Dezneva Bay is a good place to look for whooper swans.

Horned and tufted puffin: The cartoonish little birds live in vast numbers on Ariy Kamen Island and throughout the northern reaches of the planet. Besides its small stature – a puffin is as tall as jug of milk – the bird is be recognized by its brightly colored beak. The horned puffin is named for a small ebony “horn” above its eye, and the tufted puffin is known for straw-colored feathers on its head.

Thick-billed murre: Thick-billed murres, small black birds with ivory underparts, also live in the rocky landscape of Ariy Kamen Island and only breed in the North Pacific. The murre is adept at both air and water travel; it can fly at 75 miles an hour and dive to depths of more than 330 feet. You could see noisy colonies of murres gathered on the rocky cliffs; keep an eye out for their bluish-green eggs.

Crested auklet: While bird watching on Tyuleniy Island, you’ll be able to identify the crested auklet by the tuft over its beak. It can also be recognized by smell; auklets produce a “social odor” during breeding season. If that sounds off-putting, don’t worry: The smell has been described as tangerine like.

Travel to the Russian Far East with WWF