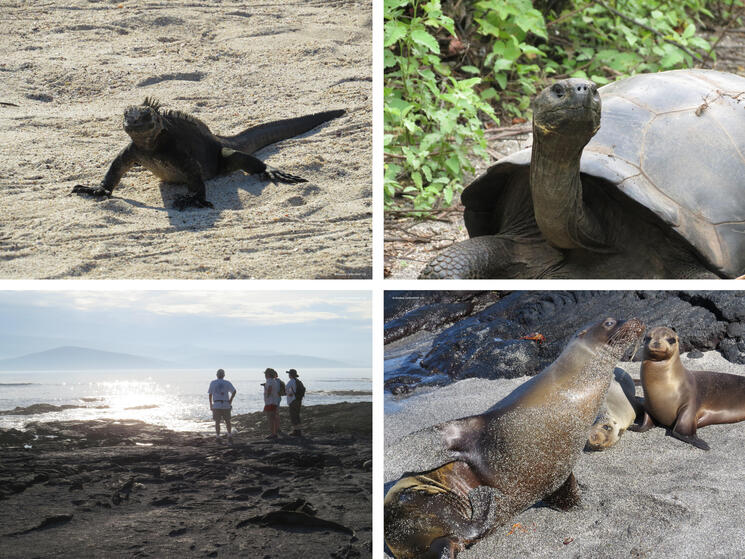 Top Four Experiences in the Galapagos

In March, Heather Finn and Kristina Griffin traveled to the Galapagos Islands for the first time. Heather works as Manager of Digital User Experience. and Kristina is Deputy Director for Cause Marketing Program. This Q-and-A documents their experience.

"The sea lions were always ready to play," says Finn.

Heather: On our second snorkeling trip near Punta Espanoza, we were on the lookout for marine iguanas feasting on sea kelp. About twenty feet away from me, I heard someone call out “Sea turtle!” I immediately changed my direction and swam as fast as I could to get a glimpse. By the time I reached the area, I was thrilled to see not one but two sea turtles--a Pacific black and hawksbill-- enjoying a morning snack! A truly amazing experience and one that I'll never forget! What about you?

Kristina: I was so surprised by the abundance of marine life, from the coral and sea urchins to the colorful fish. My favorite part was having the sea lions swim with us. I couldn’t get over how close they were and how they wanted us to play with them. I’m not a big snorkeler, so to have this graceful creature in the water next to me was pretty cool.

Heather: We both have a few funny stories about close encounters with some of the wildlife in the Galapagos. 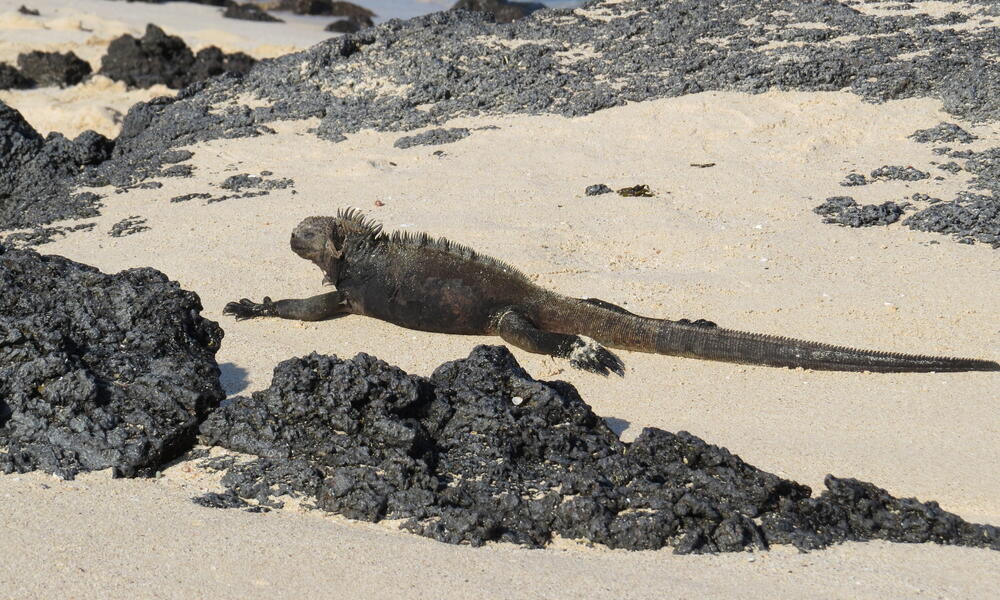 Kristina: My favorite story involves our first peek at a marine iguana. We had just finished swimming at Las Bachas and were waiting on the beach for the zodiaks when we noticed this marine iguana headed right for us. Where we were sitting on the sand, it seemed as if we were right in his pathway to wherever he needed to go. I was a little freaked out, thinking, “What is this iguana going to do? Am I in its way? Is it going to hiss, bite, or chase me?” But, he strutted by us as if we were a piece of the landscape, like it was no big deal. I think I gave a bit of a nervous laugh after he walked by.

Heather, didn’t you have a bit of an interesting encounter with a land iguana?

Heather: On our hike on Dragon Hill, our group had seen several large land iguanas off in the grassy areas on either side of the trail just munching away, enjoying their breakfast. But, there was one iguana we came across that was a bit different. I was bringing up the end of our group and taking a few extra photos when suddenly, he started coming toward me. So my natural reaction was to back up and let this iguana get where he was going.

But he kept following me. For about 10 or so backward steps, I was being "chased" by this large lizard, not in a menacing way but more in a curious way. He stopped once he was distracted by another group coming down the path from the opposite direction.

“It was one of several moments when I realized that these islands are a place where animals are curious about humans--almost as much as we are of them--instead of being fearful. ”

Kristina: I completely agree with you--many of the animals that we saw were very curious. I felt that way on our second day when we went to Genovesa and climbed the Prince Philips steps. I don’t know if you remember, but as soon as we got to the top of those steps a juvenile red footed booby came to inspect us. He was so fuzzy with all of his “baby” feathers and his cute waddle.

Thinking back, I really enjoyed our hike on Genovesa. I couldn’t get over how many different bird species we saw on one island, including boobies, frigate birds, swallow-tailed gulls and even the elusive short-eared owl who had just taken down his prey. I remember being the first person in our group to spot the short-eared owl swoop down. He was so hard to see once he landed because of his camouflaged feathers. Everyone in our group was standing very still and very quiet trying to get a good look.

Another image that sticks in my mind the most about Genovesa is seeing all of the male great frigate birds in the trees waiting for a mate. Seeing their huge black feathers and red inflated throat sacs was such an interesting contrast to the rocky volcanic cliffs of the island.

Number 2: Spotting a Pod of Dolphins

Looking back, was there a specific moment or event that you really enjoyed?

Heather: We were sitting on the deck of our boat around sunset, making our way around the northern tip of Isabela Island. Over the speaker, the captain announced he saw dolphins up ahead. Of course, we all rushed to the front of the boat, scanning the ocean for the dolphins. For a few moments, we were not sure we were looking in the right direction, but every now and then you would see a little splash way out near the horizon. As we moved closer, dark gray shapes started accompanying the splashes and eventually, we came into full view of the dolphins. It was a pod of what seemed like hundreds. I'm not even sure how long we were standing there, just watching the dolphins swim past. We were oohing and ahhing every time one jumped really high. And just when we thought the whole pod had swam past us, another group would be following behind.

Kristina: It’s so hard to pick just one thing that was special or spectacular or interesting. I think that’s why the Galapagos is such an incredible place. Not matter what island(s) you visit, there is going to be something amazing waiting for you to see or to experience. 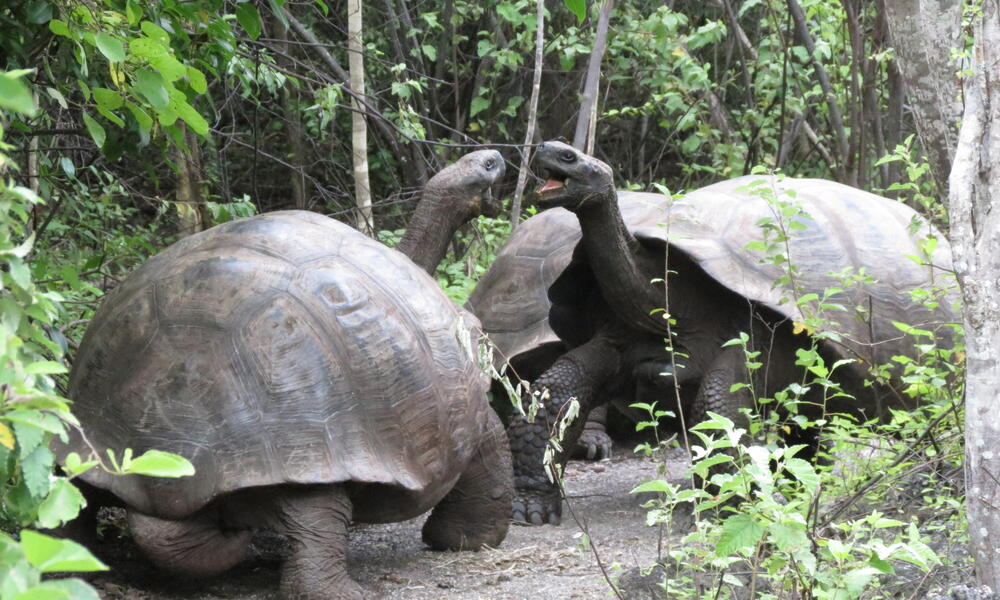 Heather: I think we will probably say the same thing.

Heather: By far, the moment that sticks with me the most is when we experienced the giant tortoise traffic jam on our walk on Isabella Island. Two tortoises were going one way and a very large tortoise was coming from the other direction. Since these are very large animals, they occupied the entire width of the path. We were about to see how giant tortoises determine the right of way, and I'm sure I'll never see something like that anywhere else.

Video: Giant Tortoise Display Dominance in the Galapagos
Get to Know a Guide: Q-and-A with Gustavo Andrade
Unplugged, Unreachable and Overjoyed