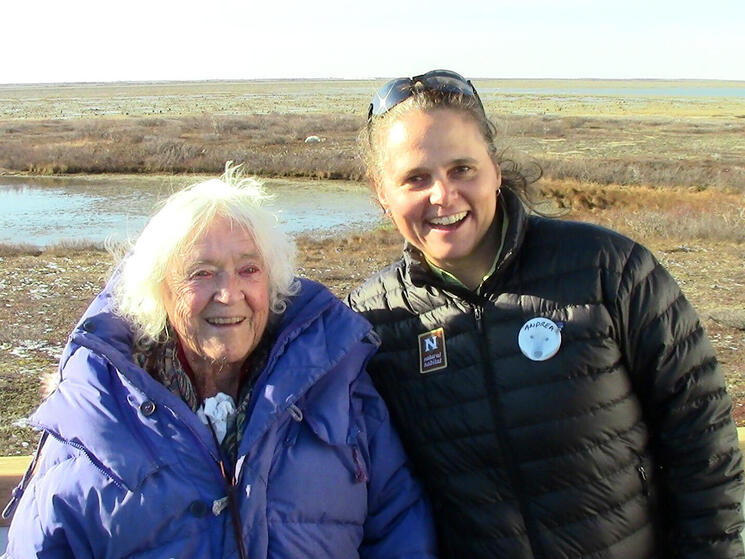 When the opportunity came up to escort Elsa Bailey on her Nat Hab polar bear adventure to Churchill, I jumped at the chance. It was an exciting prospect to spend time with this “100-year-young” woman who has inspired many in our office.

Elsa’s and Nat Hab’s paths first crossed last spring, when Elsa was celebrating her 100th birthday at Colorado’s Arapaho Basin ski resort – on skis. Becky Pahl, Adventure Prep Specialist for NHA, was on the slopes that day and happened to witness this impressive feat. Later that evening, when Becky tuned in to watch a TV news story on the centenarian skier, she heard Elsa tell a reporter that she still had a bucket list, and atop it was her desire to see polar bears in the wild.

Of course, Nat Hab happens to be the world’s premier polar bear tour operator, so Becky quickly made Elsa’s dream known to our president, Ben Bressler, and plans were arranged for Elsa to travel to Canada to pursue her dream… on us! And I was the lucky staff member who was invited to accompany her.

We set out for Winnipeg, Manitoba, on October 11th, flying together from Denver. She had me laughing from the moment we connected. I assured her a reward if we made a beeline to our room at the Fort Garry Hotel, also celebrating its 100th birthday this year. She quickly agreed as she sank into the bed, commenting with a giggle in her voice, “Ooo, this IS a yummy bed, I like this trip already!” 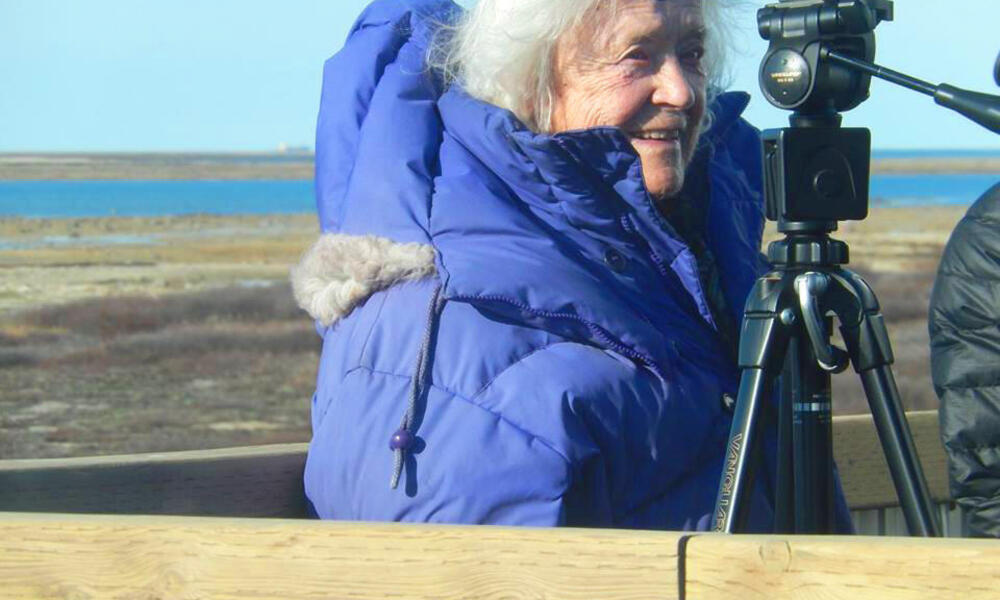 Elsa spotting wildlife from the deck of the Tundra Lodge.

In Winnipeg, we met the rest of the travelers on our Tundra Lodge & Town adventure—a very diverse group hailing from Australia to Texas and beyond. We flew together to Churchill, the Polar Bear Capital of the World, where polar bears congregate on the tundra from mid-October to late November, waiting for Hudson Bay to freeze and the start of their annual hunting season. I’ve been fortunate to explore this area a number of times before, but having Elsa by my side this time gave the experience its own special excitement.

We spent three nights at the Tundra Lodge, located on the tundra itself in the center of wild polar bear habitat, followed by two nights at the Seaport Hotel in Churchill. We saw a smorgasbord of wildlife – not just polar bears, but arctic hare, arctic fox, ptarmigan and more. Our Expedition Leaders, Eric Rock and Rinie Van Meurs, took great care in answering Elsa’s questions about life on the tundra and how wildlife adapts to living in such extremes.

Elsa was even up for adventure in the middle of the night. An option for our travelers is to receive a wake-up call when the northern lights make an appearance. On the two nights when the aurora borealis put on a remarkable display above us, Elsa eagerly jumped out of bed to see it. With her ski hat, mittens, slippers and parkas on, she ventured out to view the lights dancing in the sky. What a trooper!

Always keeping me on my toes and often faster than I was, Elsa was quick to spring into action when we spotted wildlife from the windows of the Polar Rover, the buses, or from the Tundra Lodge. With the occasional help of binoculars and spotting scopes, Elsa could make out details of the animals that live on the tundra. I loved hearing her describe what she saw, and often it took a different form from what I had just seen, which allowed for a fun banter back and forth.

When Elsa was able to describe the actions of the polar bear that was approaching our vehicle at one point—“It just stopped, it raised its head, it’s walking towards us”— I knew her bucket-list wish had been fulfilled.

One of the highlights for me, among all the adventures I shared with Elsa, was the sled dog excursion, where we learned about how sled dogs are trained, exercised and cared for in the Churchill area. The musher, Kelly, shared some stories, and then Elsa chimed in that she had spent a winter in Eagle, Alaska, in her 50s, where she had use of a dog team.

With a special twinkle in her eyes, she recounted a tale of going out to the forest, cutting down firewood and putting it on a sled, then rounding a corner with her dogs. They were traveling at top speed and dumped the load of wood, which she had to collect again before continuing home to her cabin.

This time, Elsa had a chance to sit on the sled, front and center, and I’m sure I heard a little “Yahoo!” as the dogs took off, pulling four of us along with Kelly, our musher. I have a feeling that Elsa would have preferred this mode of travel all the way back to her home in Colorado Springs, if given the chance. I enjoyed watching her petting the various dogs after the ride—it was evident that she has a real affinity for animals. 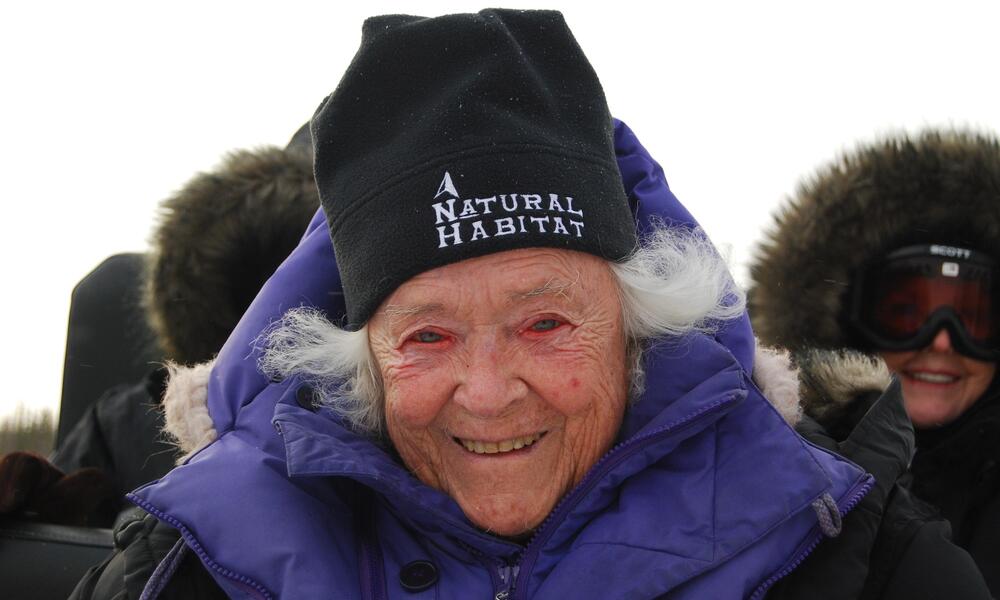 What’s next for Elsa? “Yellowstone” she says. She hopes to visit this national treasure with NHA in 2014.

Afterward, as we were warming up with hot chocolate, Elsa wondered if there might be a little strawberry brandy about that she could spike it with. I was sorry I couldn’t produce her favorite drink, there on the chilly tundra!

Many of our co-travelers asked Elsa the secret to living to 100+. It was a question that made sense to ask, but I think everyone who spent time with her will come away with their own answer, as they reflect on the many inspirational moments with Elsa that they were a part of, myself included. I think one of the secrets is shooting for the moon, and embracing each and every moment. Clearly, Elsa was able to do that on her trip to Churchill, with thanks to Natural Habitat Adventures, which made this dream a reality for a very spunky, witty and active centenarian.

Elsa has had a longer lifetime than most from which to glean information and watch the world change —in fact, it was nearly half a century ago, at 52, that she took a round-the-world trip by ship with her mother, which had a huge impact that had on her life. She’s never stopped embracing the next big adventure. In fact, the reason she moved from San Francisco to Colorado at the age of 80 was so she could take advantage of Colorado’s exceptional skiing!

Elsa Bailey saw a polar bear in the wild at the age of 100 – a testament to dreaming big. What’s next? Elsa says “Yellowstone.” She has always wanted to see this national treasure and hopes to travel there with Nat Hab in 2014. I guess I’ll need to step up my training regimen, as she’ll no doubt have me running just to try and keep up with her! 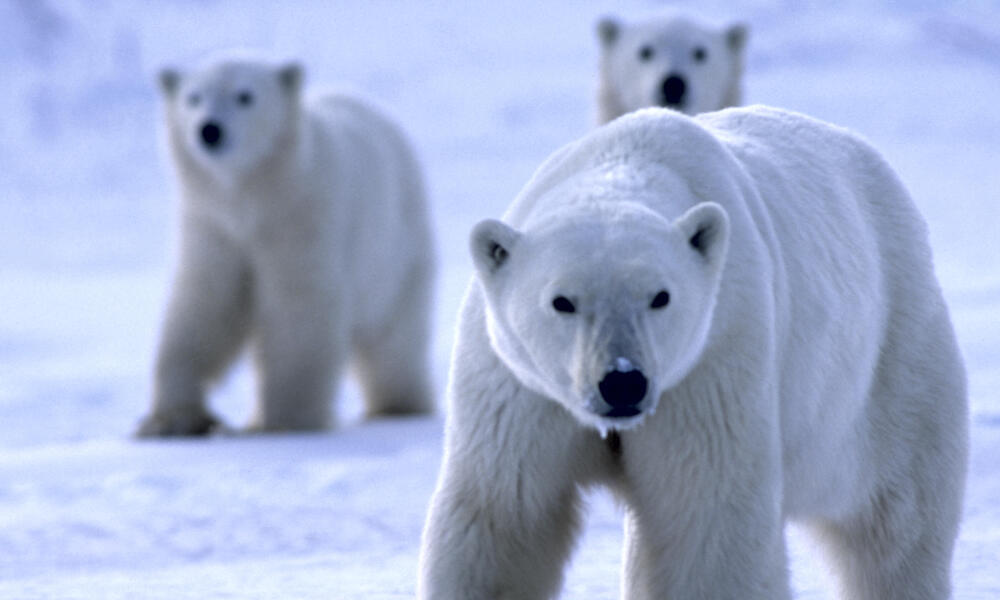 “It just stopped, it raised its head, it’s walking towards us," says Bailey describing her first sighting of a polar bear.

If you liked this article, you might also enjoy:
Get to Know a Guide: Sandra Elvin
Tracking Polar Bears in the Arctic
Step One to Winning a Trip to the Galapagos – Read Your Email