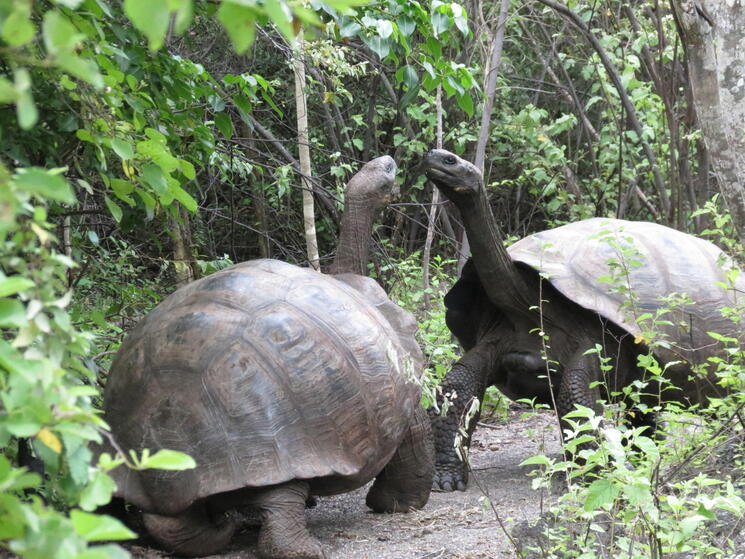 Watch this two minute video taken in the Galápagos by traveler and WWF employee Heather Finn. Find out what happens when two giant tortoises meet on a narrow path - who will win this show of dominance?

“That behavior would be a dominance show – about as aggressive as tortoises get!

The raising of the head is how they measure each other and sometimes you can get guttural sounds as well… well, actually more like a heavy breathing. That is part of the show. The one that got the taller neck is the one that probably won….” - WWF Galápagos field team

WWF’s Work in the Galapagos

The giant tortoise is an iconic species from the Galápagos and is only found on these islands. Measuring up to 4 feet long and weighing up to 700 pounds, they are the largest living tortoise in the world. Species like the giant tortoise, marine iguanas, and Galápagos penguins continue to amaze scientists and delight tourists. However such worldwide interest amounts to a large human impact and puts the unique ecosystem at risk.

WWF spearheaded conservation efforts in the Galápagos, including funding of the construction of the Charles Darwin Research Station. For more than 50 years, we have played an integral role in protecting nature in the Galápagos. We want to ensure tourism is done sustainably and can be used as a tool for conservation

Travel with WWF to the Galápagos.

If you liked this article about the Galápagos, you might also like:
Unplugged, Unreachable and Overjoyed
School of Thought: 10 Things the Galápagos Taught Me
Nature's Close Up: The Galápagos Islands