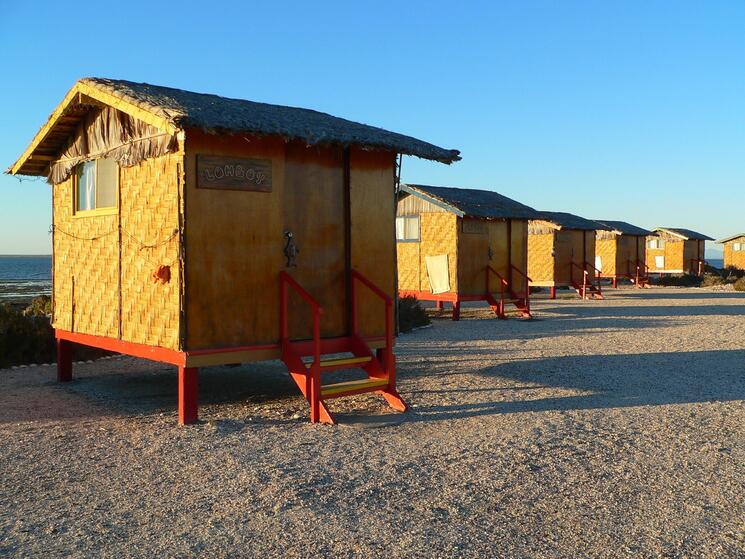 What is a Whale Cabana?

The first in an occasional series examining the most unusual accommodations on WWF tours.

The stars peppering the nighttime sky above Mexico's Baja California in February are so bright and numerous that you often don’t need a flashlight to guide your way. Constellation charts can be useless—you can see so many stars that it can be hard to differentiate the celebrities of the celestial world from the nobodies.

For anyone who lives even remotely need an urban or suburban setting, it’ll be difficult not to find yourself lost among those stars as you gaze at the clear nighttime sky during our Baja adventures. The locale along the quiet shores of San Ignacio Lagoon is so remote, not a single human-made light source shows up in any direction—with the exception of the small solar-powered lamps at the site.

While stationed on the lagoon – which borders the Vizcaino Desert—during four of the whale watching days on our itinerary, you won’t need to rough it by sleeping on the sand, or struggling to keep a tent pitched during a breezy night on the bay. Accommodations are in charmingly named structures called “whale cabanas.”

Each cabana is a well-constructed, raised, bamboo-thatched hut-like structure. Each contains two beds and a light, and that’s it! A screened-in window allows breezes to come through (though sometimes it’s too chilly to keep the window’s flap open). Rustic yet clean, the lodging couldn’t be more secluded, giving you unfettered access to the bay.

Bathroom facilities include showers with solar-warmed water and composting toilets. The camp has a lounge that’s ideal for enjoying a sunset cocktail. And a set of large windows in the dining cabana make it easy to spotting whales in the bay in between courses.

Meals are cooked in a separate kitchen structure, and you’ll be amazed by the Mexican-style specialties the chefs are able to whip up in a desert kitchen. They may take your breath away—nearly as much as the nighttime sky is sure to do.

Sleep in a whale cabana on a WWF tour.