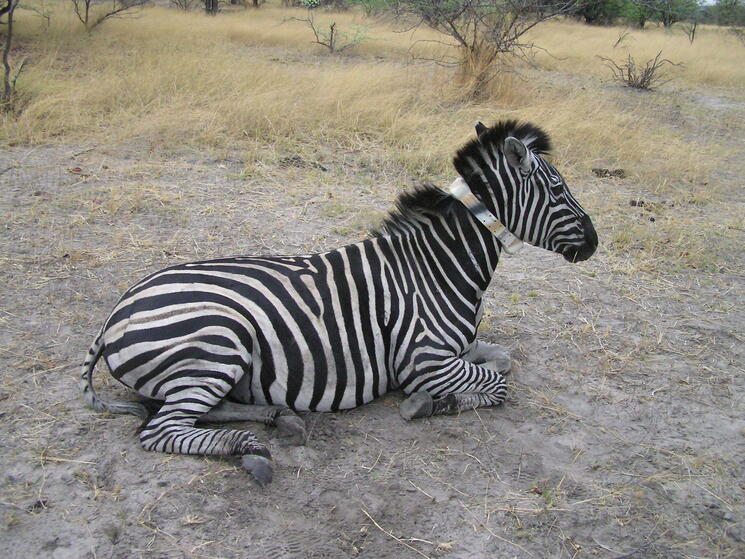 Do you ever wonder what it would be like to be an explorer? To discover a natural wonder? Being a conservation biologist, I always hope I might experience that in some small way. But in our rapidly developing world, where wilderness continues to shrink, it can feel like there is nothing big left to discover. Yet my colleague Robin Naidoo and his collaborators in Namibia (WWF, Ministry of Environment and Tourism) and Botswana (Elephants Without Borders) have done just that. They have discovered the longest known land mammal migration in Africa — a 300+ mile seasonal trek by Burchell’s zebra (their newly published full study appears in Oryx).

Adding to the surprise, this journey is not happening in the Serengeti that is so famous for massive wildlife migrations. It is happening in southern Africa, where up to several thousand zebra migrate back and forth between the Chobe River floodplains in Namibia and Nxai Pan National Park in Botswana.

The discovery seems straight out of the golden age of exploration. It’s a story about modern technology and adrenaline-pumping adventure producing some good old fashioned field science. The key technology was GPS tracking collars that Robin and colleagues used to document the movement of eight female zebra for several months through the dry and wet seasons. But first they had to get the collars onto wild zebra – no easy task! In their scientific paper about the discovery, there is a very clinical explanation: "Adult female zebras (n=8) were darted from the air or ground and immobilized using a mixture of etorphine hydrochloride, azaperone and hyaluronidase. The age and family group size were estimated for each individual, and a satellite-tracking collar attached.”

The work began when team members, including a wildlife veterinarian and one of Namibia's best chopper pilots, went swooping over the bush in a helicopter looking for a healthy female zebra. The vet would lean out to sedate the animal with a tranquilizer dart. The team would then jump out the helicopter, put the collar on the animal, take some measurements and blood samples, and administer a drug to wake the animal back up. All the while they had to be on the lookout for protective and possibly dangerous family members who were not tranquilized. One kick from an angry zebra and the operation is over for you.

Once the zebra were collared, and everyone safely back in the helicopter, technology took over the work. The GPS units recorded the precise location of each animal every 5 hours, and uploaded the data via satellite communications. When Robin plotted the data on a map upon his return from Christmas holiday in 2013, he and other wildlife biologists were stunned to see the zebras' long-distance migration route.

They had collared the animals in October, during the dry season near the Chobe River in Namibia. The zebra stayed there until early December, when one, and then the others, started moving south. By late December, seven of the 8 zebra had traveled more than 150 miles to Nxai Pan; the eighth animal arrived in early January. As more GPS data came in, Robin and colleagues could see that the zebra remained at Nxai pan for almost two months. Then, as the grass on the pan started to dry out, they headed back north to Chobe where they had started their migration.

People in Namibia have long known that zebra leave Salambala conservancy, which borders the Chobe River, at the end of the dry season, but they didn’t know where they went. Likewise, people knew that zebras came to Nxai Pan during the wet season but didn’t know where they came from. Thanks to Robin and team's adventurous and high tech fieldwork, the dots are now connected. We know that it’s the same zebra traveling 150 miles each way between Chobe and Nxai Pan, the longest documented land migration of any mammal in Africa.

And it turns out that this superlative is part of an even bigger one. The entire migration takes place within the boundaries of the largest multi-country conservation area in the world—the Kavango-Zambezi Transfrontier Conservation Area, commonly known as KAZA.

This 109 million acre expanse covers five countries. It was established in 2011 by the governments of Angola, Botswana, Namibia, Zambia and Zimbabwe, in recognition of the large-scale habitat needs of some of Africa’s most magnificent wildlife species.

KAZA reflects the reality that wildlife never has, and never will, abide by the political boundaries that humans draw on maps. Today, elephants, wild dogs, wattled cranes and both black and white rhinos call KAZA home and benefit from protection within its vast landscape.

With this in mind, we know that the previously unknown migration is more than a cool discovery. It reminds us of the value of doing science in the field in order to explore and better understand a natural world that is still full of surprise. And it underscores how essential large-landscape conservation is for preserving spectacular phenomena like the longest zebra migration in the world.

To glimpse this process from the researcher’s point of view, check out this stunning short video: