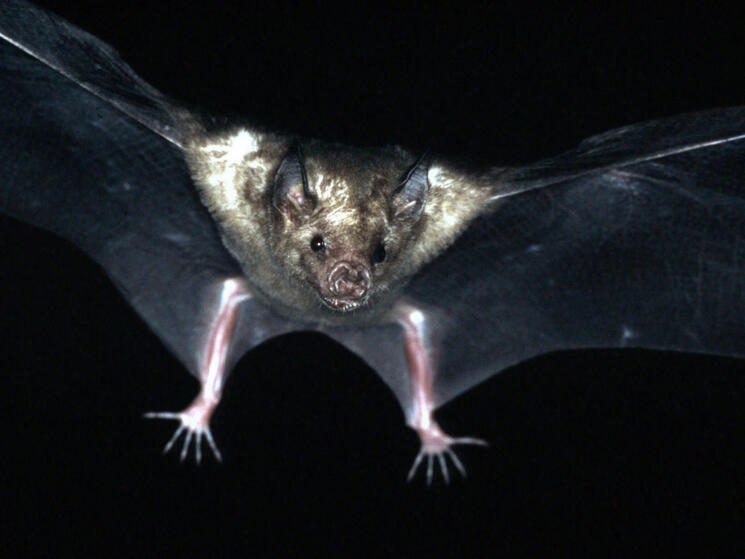 A really scary thought is to imagine what the world would be like if we didn't have any bats at all.

There are about 1200 species of bats in the world—one in every five mammal species. The largest bat is the flying fox, with a wingspan of six feet! The smallest species is the bumblebee bat that weighs less than a penny. Among all of those species, only three are vampires, so you don't really have to worry much about bats sucking your blood.

Two-thirds of bat species feed on insects and other small prey. They are our nighttime pest patrol. One Mexican free-tailed bat can eat about 1000 mosquitoes per hour. The large colony of 30 million bats in Bracken Cave in Texas consumes about 250 tons of insects every night. Just 150 big brown bats can eat 33 million root worm pests.

Without bats, we'd have more pests and our crops would suffer from more pest damage.

Other bat species feed on flowers and fruits, acting act as pollinators and seed dispersers, especially in deserts and rain forests. Bats pollinate wild bananas, the famous saguaro cactus, and durian, the world's most expensive fruit. Without bats, rain forests would recover more slowly from disturbances. We would also not have tequila—the agave plant from which tequila is made depends on the Mexican long-tongued bat to pollinate it.

Bats are threatened by loss of habitat, especially their roosting sites. You can help bats by protecting their roost sites and maybe building a bat house for your yard.

Bats are also vulnerable to being killed by wind turbines. That risk can be reduced through careful siting of wind power developments away from important bat roosts and migration routes, and by raising the cutout speed for turbines so that they aren't spinning in low wind (read low power) conditions when bats are most active. Another nefarious threat is white-nose syndrome, a disease that is wiping out many bat populations in North America.