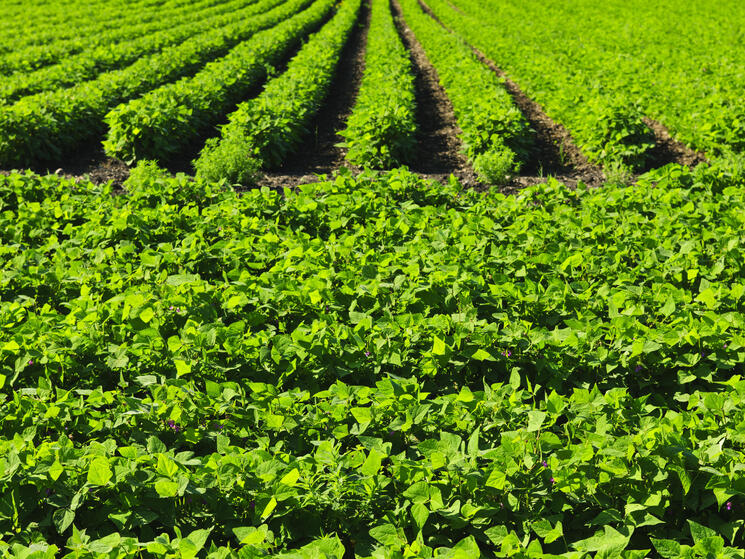 Imagine the environmental consequences if every man, woman and child in New York City, Los Angeles and the rest of America’s 13 most populous cities put an additional car on the road. The emissions from those 28 million vehicles would generate about 131 million metric tons of greenhouse gases a year. This is roughly the same amount that was produced by converting prairies, forests and other lands for U.S. soy and corn production between 2008 and 2012, according to a new study from researchers at the University of Wisconsin-Madison.

The study found significant conversion, much of it in a wide area stretching from North Dakota and Texas, “mimicking the land change that contributed to the Dust Bowl of the 1930s.” “New expansion occurred most frequently on marginal land that had severe to very severe limitations to cultivation,” the researchers found.

Published in Environmental Research Letters, the study calculated that row crops such as soy, corn and wheat were planted on about 7.34 million acres of uncultivated land during this period, an area larger than the state of Massachusetts. Of that, about 22 percent was converted from long-standing prairie grasslands.

Measuring land conversion is a tricky proposition. Often, reports overestimate conversion by including land that is actively managed but lays fallow for a short period of time. This study is the first national analysis to use methods that draw on long-term data and to omit land that had been cultivated at some point since 2001.

The analysis comes on the heels of forecasts from the U.S. Department of Agriculture that soy and corn will be planted on about 173.8 million acres of U.S. land in 2015, down slightly from 174.3 million acres in 2014. Though a 2 percent dip in corn production is driving this trend, soy will expand to a record 84.6 million acres this year. 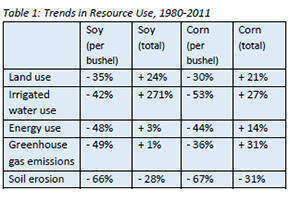 The combination of converting grasslands and marginal lands for crop production is cause for concern. The study notes: “Compared to croplands, grasslands harbor significantly greater plant, microbial, and animal diversity, and generate higher levels of nearly all agriculturally-vital ecosystem services including pest suppression and pollination.” Thus, recent cropland expansion may actually be undermining the productivity gains U.S. row crops have witnessed over the past decades.

American farmers should be recognized for significantly reducing the ecological footprint of corn and soy on a per bushel basis. Between 1980 and 2011, for each bushel of soy and corn produced, farmers used less land, irrigated water, energy, greenhouse gas emissions, and soil erosion. However, because overall production of corn and soy roughly doubled during this period, the aggregate impacts across all of these measures increased, except for soil erosion.

Why is this so important? Each year, more than 7.3 billion people consume 50 percent more resources than the Earth can provide. In other words, we’re living on one-and-a-half planets – and that is the very definition of unsustainable. By 2050, more than 9 billion people will demand twice as much food as we’re eating today. Agriculture already occupies about 38 percent of the planet’s land and accounts for 70 percent of the freshwater that we humans use. It also contributes to biodiversity loss. According to WWF’s latest Living Planet Report, which measured animal populations in 2010, “the number of mammals, birds, reptiles, amphibians and fish across the globe is, on average, about half the size it was” in 1970.

The grasslands of the American Midwest are of immense environmental and economic value. Spread across five states and two Canadian provinces, the Northern Great Plains, for example, are home to many species, including the greater sage grouse, swift fox, pronghorn, elk and the endangered black-footed ferret. They are also home to thousands of ranchers, whose cattle help maintain the ecosystem through grazing. Not only can cows preserve the habitat for wildlife, but they also keep soil healthy, which allows more carbon to be stored there.

The bulk of the converted lands also sit in many of the country’s most important water basins. According to the study, new expansion occurred most frequently on marginal land that had severe to very severe limitations to cultivation. As a result, more fertilizer and pesticides will be applied on potentially erodible land, which increases the likelihood that these substances will end up in our rivers, lakes and even our coastal areas and oceans. Already, waste runoff from major crop production areas within the Mississippi River watershed contributed to a low-oxygen area in the Gulf of Mexico that was more than 5,000 square miles in 2014—as big as the state of Connecticut. In these “dead zones,” marine organisms are deprived of the oxygen they need to survive, which reduces biodiversity and weakens coastal communities that rely on fishing for food and income.

To be clear, row crops are vital. According to the USDA, soy and corn alone were grown on more than 300,000 farms and generated more than $105 billion in sales in 2012. That’s why it’s critical that we produce these crops more sustainably, so that they can continue to serve as an economic backbone for family farms.

To promote environmentally, socially and economically sustainable crop production, we need to identify a set of policy and market-based solutions. The authors of the study call “for immediate review of U.S. agriculture and biofuel policies to avoid adverse incentives.” Specifically, they recommend revising certain Farm Bill policies to help prevent further conversion of grasslands. For example, while the 2014 Farm Bill included a “Sodsaver” provision to protect untouched land, it only applies to Iowa, Minnesota, Montana, Nebraska, North Dakota, and South Dakota, which accounted for about 36 percent of cropland expansion on uncultivated land prior to its implementation. Expanding it could help preserve healthy lands across the rest of the United States.

In addition to policy solutions, supply chain actors – farmers, traders, processors and retailers – can take action themselves. Indeed, many already have. Initiatives such as Field to Market: the Alliance for Sustainable Agriculture are working to meet the challenge of producing enough food, fiber and fuel for a rapidly growing population while conserving natural resources and improving the ability of future generations to meet their own needs. Field to Market has committed to conserve native habitat, improve water quality, use irrigated water and energy more efficiently, reduce greenhouse gas emissions, and curb soil erosion by 2020. We must work together to reward those who are contributing to these goals and to support the rest to improve.

The degradation of our soil may conspire with climate change to bring about another Dust Bowl across the Midwest. This time around, however, we can look to California—now in its fourth year of drought—not as a haven but as a sign of things to come.