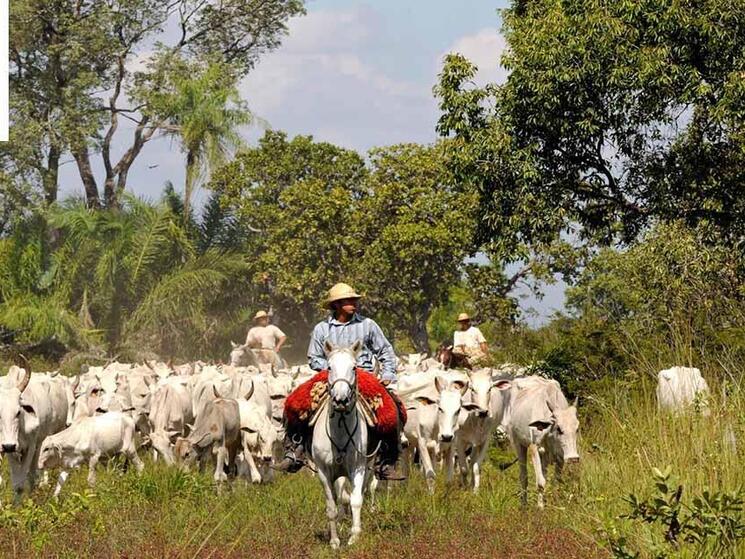 New cattle ranching practices could turn the tide of deforestation in the Amazon.

For a business that cares about its reputation and impact on the planet, not buying beef from the Amazon seems like a no-brainer. Beef production is one of the biggest drivers of deforestation in the region, and no company wants to be associated with the destruction of the world’s most precious rainforest.

That was the position taken for many years by McDonald’s, one of the world’s largest beef buyers. But during the Rio Olympics in 2016, the company’s developmental franchisee in Latin America, Arcos Dorados, announced progress and new innovations, which allowed beef to be sourced from the Amazon without contributing to deforestation.   Instead of simply avoiding the huge number of cattle ranchers in the region, Arcos Dorados is a partner in a project called Novo Campo (“new land”) which aims to make beef production more sustainable. The Novo Campo programme has leveraged on innovative financing tools for its implementation, raising EUR12 million from Althelia ecosphere.

Since 1970, an area of rainforest the size of France has been cleared in the Amazon region. “Cattle ranching is one of main economic activities in these areas, but the land is being used in a very inefficient way,” explains Leonardo Lima, director of sustainability for Arcos Dorados, developmental franchisee of McDonald’s in Latin America. “Today, new techniques and procedures enable farmers to produce more with less land – they can achieve four to five times greater productivity without clearing any more forest.”

For example, dividing the property into smaller units and regularly rotating the cattle between them helps to optimize grass growth and keep the soil fertile. Providing plenty of shade and piping water by gravity from reservoirs to drinking stations improves animal welfare – which also means the livestock are ready for market sooner, in turn reducing the greenhouse-gas emissions per kilo of beef. Intensifying production increases yields for farmers, but also frees up land that can be used for other purposes – including growing soy and corn, and restoring native forest.

Working with 28 farmers in the state of Mato Grosso, Novo Campo is piloting the use of indicators developed by the Brazilian Roundtable for Sustainable Livestock (GTPS). They cover natural resource use, people and community, animal health and welfare, quality, traceability, efficiency and innovation.

“We were telling cattle ranchers that there are more sustainable ways to do their work,” says Francisco Beduschi, current GTPS president and coordinator of Sustainable Livestock Initiative for the Instituto Centro de Vida - ICV, the local environmental NGO that designed and develop the project. “So they challenged us to show them how.”

The project helps ranchers apply various good agricultural practices, which have been tested by the Brazilian agricultural research agency Embrapa, in line with the GTPS principles. It also has tools that enable ICV’s technicians to measure aspects of farms social and environmental performance – including a Geographic Information System (GIS)-based tool to verify that there has been no deforestation on farms. This in addition to a general satellite deforestation monitoring system in the Amazon put in place by the Brazilian government. All farms involved must sign a commitment pledging themselves to zero deforestation and continuous improvement.

One area where striking results can be seen is in greenhouse-gas emissions. “The best-performing ranches have reduced their emissions by 90 per cent,” says Francisco. Indeed, he believes it’s possible for ranches to be carbon-neutral through measures such as good pasture management, which can lock carbon into the soil.

“Our aim is that this could be the next baseline for sustainable production – zero deforestation, with a net carbon balance and indicators to measure sustainability,” he says.

The indicators being developed by the Brazilian roundtable are aligned with the principles and criteria of the Global Roundtable for Sustainable Beef, a multi-stakeholder initiative founded by beef industry players including McDonalds, Cargill and Walmart and NGOs like WWF, the Rainforest Alliance and The Nature Conservancy (TNC) to promote an environmentally sound, socially responsible and economically viable beef industry. Having common principles and measurable indicators in place makes it easier for buyers to verify the sustainability of the beef they buy.

Lima acknowledges that the beef sourced to date from the Novo Campo project is “a drop of water in the ocean”. But, he says, there’s growing interest from farmers and investors – and that’s good news for the world’s largest rainforest. “With these procedures and techniques,” he says, “there is no reason and no excuse for anyone to cut any trees in the Amazon.”

Meanwhile, the good practices, indicators and monitoring systems being developed through the project will support other efforts, such as the Collaboration for Forests and Agriculture. This five-year initiative, led by WWF, TNC and the National Wildlife Federation with funding from the Gordon and Betty Moore Foundation, aims to eliminate deforestation linked to beef and soy in the Amazon, Cerrado and Chaco regions in Brazil, Paraguay and Argentina  by 2020.

“Getting major buyers to commit to verified deforestation-free beef provides an incentive for producers on the ground to adopt better practices, generating jobs and wealth ” says Jean-François Timmers, WWF’s Global Soy Lead. “The Novo Campo project shows it’s possible to increase beef production while reducing the area of land needed, also liberating new space for expanding crops without destroying natural habitats. We urgently need to scale up these solutions to end deforestation in the Amazon, the Cerrado and beyond.”