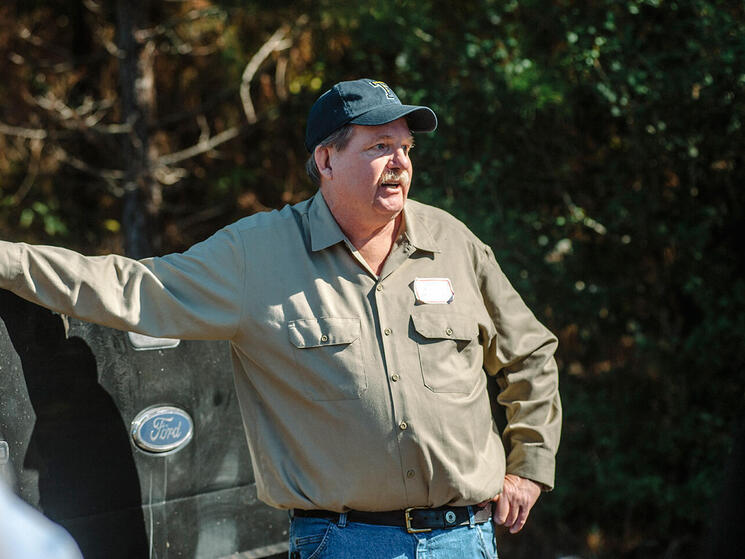 Fighting Climate Change: From Meeting Rooms in Paris to Kitchen Tables in the US

All Winnie the Pooh did was set out into the woods to find some honey. Little did he know that his day would also involve helping a sad donkey find its tail.

It is safe to assume the jolly bear also had no idea that his adventure would inspire Dan MacWilliams to become one of the best stewards of the land in the US. After reading the fictional tales of Pooh as a child, Dan essentially set out on a mission to recreate the lush and lively forest, called “Hundred Acre Wood,” that was the stage for Pooh’s odysseys.

He has succeeded. Dan and his family own and manage a 530-acre forest in Arkansas that is dense with pine and other species of trees. It is one of the healthiest forests in the state, as it is managed in accordance with the Forest Stewardship Council (FSC) standards. The FSC, which WWF helped create in 1993, is considered by many to be the gold standard of forest certification for environmental, social, and—increasingly—economic reasons. They are the only forest standards, for example, that prohibit the use of toxic chemicals, protect old growth forests and uphold the rights of local people.

Dan’s family was one of the first in the US to receive the FSC certification. Nearly 40,000 have followed in their footsteps —making the US a model for the critical role owners of relatively small tracts of forest land (“small” compared to larger tracts that are usually owned by large corporations) play in saving the world’s forests. These FSC-certified “smallholders” manage nearly 4.8 million acres of the forest land in the US, mainly in the Southeast, Wisconsin and Pacific Northwest.

It’s land that is essentially in your backyard. Not in the forests we hear about more often—in places like Brazil and Indonesia. Those are valuable forests, no doubt. But here’s just one reason US forests matter: up to 60 percent of the fiber used to make paper in the US comes from the US (mainly the Southeast).

That’s why responsible landowners like Dan are so important. Equally important are the US-based companies that are teaching landowners how to become FSC certified, buying FSC-certified timber from US landowners, and using it to create toilet paper, paper towels, napkins, cups, copy paper and other products sold in the US. For example, Dan and his family sell some of their wood to Domtar Corporation, which uses it to create copy paper. (Incidentally, the Domtar pulp mill is called “Ashdown Mill,” the same name of the real forest that the forest in the Winnie the Pooh books is based upon. Coincidence? You decide.)

By producing and buying timber in the US that is FSC certified, landowners and companies conserve forests and, ultimately, fight climate change. Trees absorb carbon as they grow and release it as they age or are cut down. It’s up to all of us—from US families who own forest land to our global leaders who gather in Paris for the UN climate talks—to help. We will not be able to address climate change if we do not talk about the responsible management of forests.