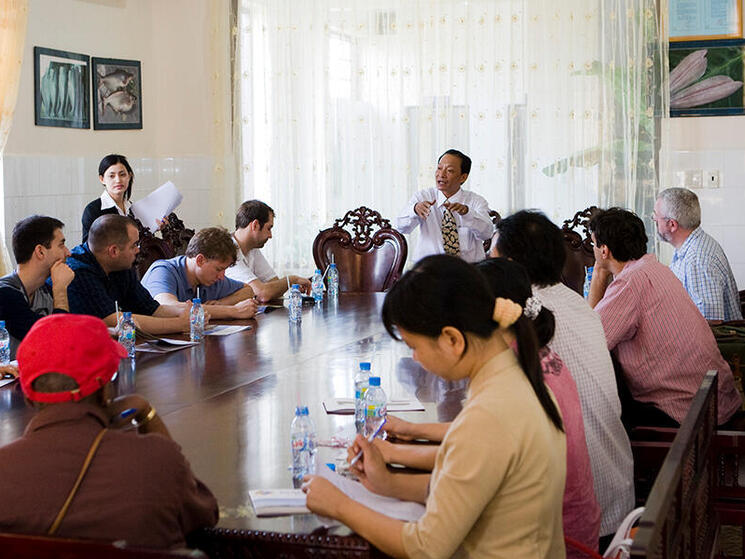 Major U.S. Businesses Have Pledged to Act on Climate. Here’s What That Looks Like.

Country negotiators are in the spotlight at UN climate negotiations in Bonn. But the private sector will be represented at COP23 as well, particularly from the United States.

Major U.S. corporations are stepping up on climate action because they understand the grave risk this threat poses to their customers and bottom lines. Increasingly, they are taking bold action to do their part to solve the problem.

To date, 57 U.S.-based companies, including 35 Fortune 500 companies, have committed to science-based targets, which align with the Paris Agreement’s goal of keeping global temperature rise well below 2 degrees Celsius. And despite the Trump Administration’s efforts to roll back climate protections, a new report from America’s Pledge shows how U.S. businesses have affirmed their commitment to reduce emissions and build a clean energy economy, including through the “We Are Still In” declaration with over 1,700 businesses and growing. 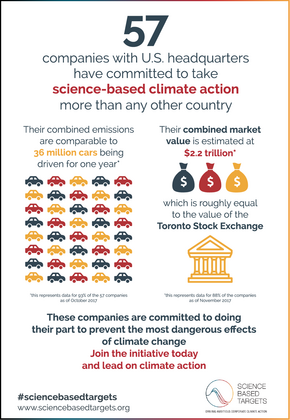 So how do companies translate targets into changes in the real world?

First, they start by looking for ways to improve internal operations. Then they can go even further through efforts to reduce value chain emissions, which are often significantly greater than those from their operations and can have a positive ripple effect across a wide circle of companies around the world.

Change the Things I Can

To slash emissions from internal operations, companies need to incorporate both energy efficiency and renewable energy into their strategies. Take HP, Inc for example. HP, Inc. set a science-based target to reduce emissions from global operations 25 percent by 2025, compared to 2015 levels. To get there, they’re focusing on improving energy efficiency in their facilities and transportation fleets, and shifting to solar and wind technology.

In their own buildings, they’ve deployed cost-effective advanced energy savings systems. Retrofitting just three of their facilities (in Boise, Idaho; Corvallis, Oregon; and Singapore) cut a cumulative 8.8 million kWh of energy use annually, avoiding carbon emissions on par with the annual usage of 700 American homes.

They’re also driving toward a more efficient auto fleet, planning to reduce emissions from their auto fleet by 10 percent by 2025, compared to 2015 levels. In Europe, HP has already reduced fleet average GHG emissions by using more energy-efficient vehicles. They even relocated their European transit hub to Greece based on cost and emissions savings.  All of these efforts help HP chip away at achieving its science-based emission reduction target.

HP is also shifting toward less GHG-intensive energy sources, including increased use of on-site and off-site renewable power. Through the RE100 initiative, they set a goal to achieve 100 percent renewable electricity use in their global operations, with an interim target of 40 percent by 2020 -- just two years from now. (Fun fact: 44 of 114 RE100 companies are also part of the Science-Based Targets initiative.) 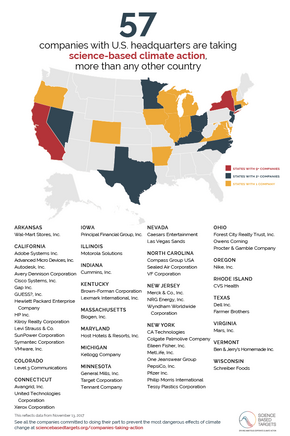 Driving Reductions Through the Value Chain

To meet its scope 3 target of one billion tons of emission reductions by 2030, Walmart is asking its global network of more than 3,000 suppliers to participate in the Project Gigaton initiative. Using a supplier sustainability platform and emissions reductions toolkit, Walmart encourages its suppliers to focus their efforts on what their data tells them are the most important areas: energy, agriculture, waste, packaging, deforestation and product use and design.

As Walmart is the world’s largest retailer, the global ripple effect will be huge. Recently, Walmart supplier and Pakistan’s biggest exporter of home textile products, Yunus Textile Mills Limited, became the first Pakistani company to commit to setting a science-based target. Other Walmart suppliers are now considering participating in the initiative.

Kellogg Company is also engaging its suppliers to achieve its goal of reducing absolute value chain emissions 50 percent by 2050, compared to 2015. They’ve designed over 45 programs to help farmers around the world decrease their carbon footprint, and committed to help half a million farmers implement smart agricultural practices focused on emission reduction and resilience. They are also asking their suppliers to respond to CDP’s annual supply chain questionnaire.

“We are collating research and aggregating learning from best practices, and then sharing back with individual farmers so they can benefit from the collective information,” said Amy Braun Senter, Sustainability Director at Kellogg.

A growing number of companies see the benefits of increasing the ambition of reduction efforts for their operations and engaging with their value chain to drive significant reductions. The proliferation of science-based target setting among major U.S. companies reflects the unstoppable momentum behind corporate climate action and the strong business case for doing so.

This blog was originally posted by the World Resources Institute. Link here.