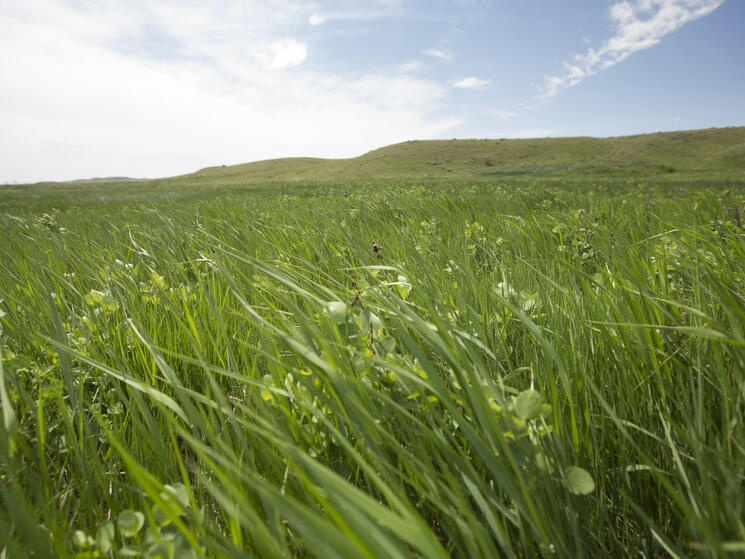 Now is an important, if uncertain, moment for conservation and agriculture in the United States.

The agricultural sector and environmental non-profits alike have expressed significant concerns with the Administration’s proposal to shrink federal support for farmers, including a plan to “streamline” voluntary conservation programs. These programs value and incentivize stewardship in ways the market traditionally has not: they support farmers who implement good conservation practices on working lands and protect areas of immense ecological value.

World Wildlife Fund (WWF) recently joined other NGOs and food industry leaders in urging Congress to support robust funding for the Regional Conservation Partnership Program (RCPP), a program that leverages traditional U.S. Department of Agriculture conservation programs like the Environmental Quality Incentives Program (EQIP) and Conservation Stewardship Program (CSP) with locally-led projects. Farmers and the private sector use RCPP to scale the impact and value of public dollars on working lands. Without RCPP and other federal conservation programs, their conservation efforts will lose ground.

For years, WWF has worked to leverage the power of markets to improve how food is produced. And in the face of this shifting federal landscape, the market remains an influential force in American agriculture. Whether companies are championing public-private partnerships, working toward sustainable sourcing goals, or supporting healthy landscapes in their communities, their voices for sustainability in agriculture are more critical than ever.

As members of Field to Market: the Alliance for Sustainable Agriculture, WWF works with commodity crop growers, traders, processors, retailers and other supply chain stakeholders to implement programs to better measure and manage the use of natural resources in agriculture. Historically, American farmers have excelled at boosting productivity. They used about 40 percent less land, 33 percent less water and 35 percent less energy to produce a bushel of soy in 2015 compared to 1980. Over the same period, corn growers reduced energy use by about 39 percent and greenhouse gas emissions by about 30 percent per bushel.[i] This trend will need to continue at national and regional levels as demand for crops increases.

Productivity is only one measure of progress toward better environmental outcomes, however. Land, water, and energy use, and greenhouse gas emissions, for example, have increased for some crops overall, putting pressure on land, freshwater systems, and the wildlife they support. WWF research has shown that since 2009, 53 million acres of grassland in the Great Plains have been converted to cropland. While about half of that area has since been returned to perennial cover, initial plow-up of diverse naturalized or native grassland has significant, long-term environmental impacts on biodiversity and soil function. Restoring land is important but it can’t always undo this initial damage.

To protect the Northern Great Plains, WWF works with ranchers across the U.S. and Canada to improve the sustainability of the cattle industry. Stretching from Alberta and Saskatchewan through Montana, Wyoming, North and South Dakota and Nebraska, this ecosystem is one of the world’s four remaining intact temperate grasslands, and it has immense social, economic and environmental value. The Northern Great Plains are home to myriad animal species—from bison to butterflies—and support the communities and livelihoods of thousands of agricultural producers. The grasslands also store carbon and water, which helps protect against water pollution, soil erosion and even climate change.

Jerry and Renae Doan, winners of Sand County Foundation’s 2016 Leopold Conservation Award, demonstrate how ranching and farming can complement nature, instead of competing with it. On their 17,000-acre Black Leg Ranch in McKenzie, North Dakota, they grow more than 20 species of cover crops and haven’t tilled their farm for more than 15 years. Their intensive grazing program mimics what bison did when they dominated the plains. These techniques have laid a strong foundation of rich soil, which the Doans use to grow healthy grasses, crops and cattle.

In addition, WWF and the United Soybean Board are collaborating to integrate sustainability—including in-field conservation, social sustainability assurances and protection or improved stewardship of intact grasslands—into soy supply chains. Innovative, market-based initiatives like these will help mainstream conservation in agriculture and manage the economic risks that come with investments in more sustainable practices.

We’re proud to support public and private conservation programs and to collaborate with many companies that have reaffirmed their commitment to honoring the goals laid out in the Paris Agreement. Indeed, bold actions like these from producers and supply chain actors will be increasingly critical in their own right and as reminders of the value of conservation and sustainability. Improving productivity is essential, but efforts to reduce agriculture’s overall impact on the environment while maintaining a viable agricultural economy will ultimately be the measure of true success.

Kate Schaffner is a Senior Program Officer for Sustainable Food at WWF.

[i] Field to Market: The Alliance for Sustainable Agriculture, 2016. Environmental and Socioeconomic Indicators for Measuring Outcomes of On Farm Agricultural Production in the United States (Third Edition). ISBN: 978-0-692-81902-9.