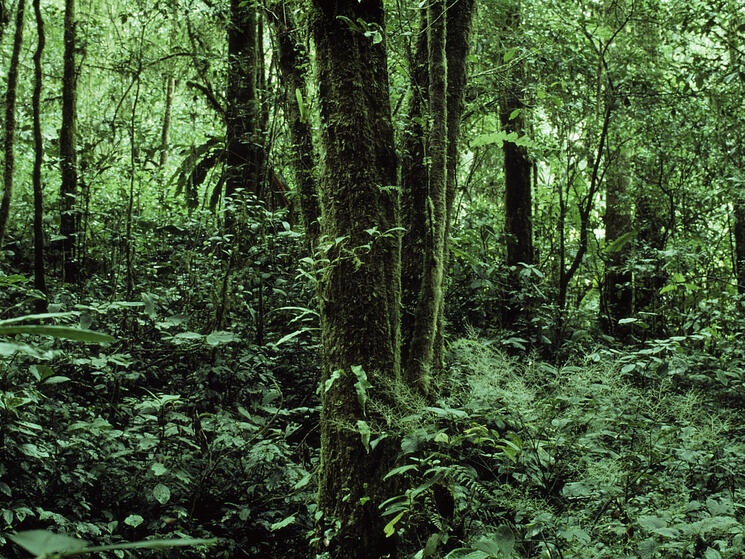 The FAO’s Global Forest Resources Assessment – FRA2015 reconfirms what many of us have seen with our own eyes: devastating deforestation in the tropics over the past 25 years.

Looking forward, the picture isn’t any rosier. In his new book, On the Edge: The State and Fate of the World’s Tropical Rainforests, WWF’s former Director General Claude Martin warns that “fatal interactions” between deforestation, forest fragmentation and climate change could dramatically reduce the size and planetary significance of tropical forests over the course of this century.

WWF’s recent report Saving Forests at Risk highlights that, without urgent action, 170 million hectares of forest could be lost in just 11 areas between 2010 and 2030. These “deforestation fronts” account for 80 per cent of projected deforestation. Most are characterized by a chronic lack of governance. Forests that aren’t properly protected or valued are at risk of being cleared for commercial or small-scale agriculture, gutted by illegal logging, ravaged by fires, or encroached upon as infrastructure and industry push further into the forest frontier.

One alternative to this anarchic free for all is to manage forests responsibly so they provide a long-term supply of timber and support sustainable socio-economic development. Selling wood brings income and employment, creating an economic case for forests to be left standing rather than cleared to make way for other land uses. And as a healthy forest grows more timber, this should, in theory, motivate good forest stewardship.

But does the theory hold in practice? Good forestry needs stability and certainty – not always easy to come by in the “Wild West” of deforestation fronts like the Amazon, Congo Basin or New Guinea. Some in the forest industry remain willing to exploit a vacuum in governance. Hit-and-run logging companies use destructive practices to strip out high-value species, leaving behind social conflicts, clogged waterways, canopy gaps that spark fires and abandoned roads that invite future encroachment. Makers and buyers of forest products are also implicated. Chatham House estimates that as much as half of all tropical timber traded internationally now comes from forest conversion, of which nearly two-thirds is thought to be illegal.

However, for a responsible company, building a sustainable yet viable business means rising above the chaos of the forest frontier. The forest products industry as a whole has made strides in recent years. We’re seeing better logging practices, serious efforts to keep illegal wood out of supply chains, and growing demand for certified sustainable timber. With few exceptions, the pulp and paper industry no longer converts natural forests to plantations – in fact, some companies are helping to restore tropical forests alongside plantations.

“Good forestry needs stability and certainty – not always easy to come by in the “Wild West” of deforestation fronts like the Amazon, Congo Basin or New Guinea.”

The Forest Stewardship Council (FSC) has helped to spur on these developments. When consumers choose to buy FSC-certified products, it creates an incentive for forestry companies to improve their management in order to meet FSC’s principles and criteria.

There’s a growing body of evidence to demonstrate that FSC certification can bring environmental, social and economic benefits in tropical forests.

Recent WWF research suggests that an investment in upgrading to FSC pays off. Profitability and Sustainability in Responsible Forestry found that FSC certification brings economic benefits to logging companies, especially in the tropics.

Among the 11 companies studied, the average cost of certification in tropical forests was US$4.21 for every cubic metre of certified timber produced. But this was outweighed by the benefits – including price premiums, improved operational efficiency and other advantages such as tax breaks, grants and elimination of bribery payments – which worked out at US$9.19 per cubic metre.

And there could be new markets on the horizon for the services that well-managed production forests provide beyond timber, such as payments for reducing carbon emissions. A study in Indonesia found that “climate-smart” forestry practices can reduce emissions by 30-50 per cent.

Meanwhile, new studies by researchers from Duke University, supported by WWF, show that FSC certification has brought about a small but significant reduction in the rates of deforestation in different tropical regions. In Borneo, the Peruvian Amazon and Cameroon, FSC-certified logging concessions had lower rates of forest loss than non-certified concessions, and considerably lower rates than areas outside logging concessions.

This follows a report published last year by the Centre for International Forest Research that found that FSC had pushed logging companies in the Congo Basin toward “remarkable social progress.” The report identified significant differences between FSC-certified and non-certified operations, with FSC certification resulting in better working and living conditions. Other studies in the region have found that certified companies were much more likely to comply with legislation and internationally recognized best practices.
It’s still early days for this research – if forest management in these regions is challenging, so too is the task of gathering reliable data. But the evidence certainly suggests that responsible forestry has a positive role to play.

If we’re going to save tropical forests, cutting some trees – rather than all of them – can be an important part of the solution.