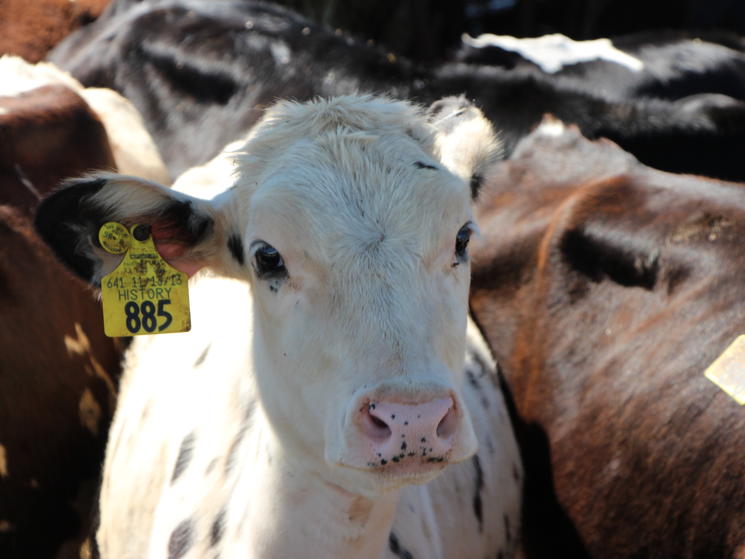 Today, President Obama released a “Biogas Opportunities Roadmap”, as part of the administration’s Climate Action Plan - Strategy to Reduce Methane Emissions. The Roadmap promotes the market potential and benefits of biogas and encourages the adoption of closed-looped biogas systems. In action, this is collecting cow manure and allowing it to ferment in a sealed tank. The methane released during fermentation is captured and used for energy. In a closed-loop system, the “cooked” manure – essentially sterilized -- is separated into liquid and solid. The liquid is used as crop fertilizer and the solids can be used as cow bedding or compost.

Biogas systems improve the sustainability of a dairy, swine or poultry farm’s daily operations by helping farmers conserve resources and cutting methane emissions – both of which combat climate change.

Biogas systems operate through the use of anaerobic digestion, the process by which biodegradable material is broken down by bacteria in the absence of oxygen.

Never heard of anaerobic digestion? That’s okay. For farmers, it works like this: A farmer pools cow manure into an oxygen free enclosure. Over time, bacteria convert the manure from solid waste into liquid waste, which produces methane gas. The methane is separated out, collected and converted into electricity to power farms or houses, or processed into CNG to power trucks, or could even be used to make bioplastics.

But, it doesn’t stop there. The reason these biogas systems are called “closed-looped” systems is because the liquid that remains in the digester is then used to fertilize farmland. This land grows crops which are then fed to the cows, who then produce manure that is used in the digester. The fiber that is left after digestion can be used for compost, fiber for cow bedding, potting soil or even cardboard. An added bonus? There is no odor released in the process! Interested in seeing how this works?

These systems become even better when organic waste from commercial food and beverage processing plants are added into the mix. For example, companies like The Coca Cola Company and Cabot Creamery send organic waste from their bottling and cheese making plants to farms with biogas systems instead of sending it to landfills. This reduces greenhouse gas emissions from their operations, helps fertilize crop land and saves money on landfill fees – all of which increases the value of local community members who use the green power generated by the digester. Check out this great effort from the Cleveland Browns as another example. 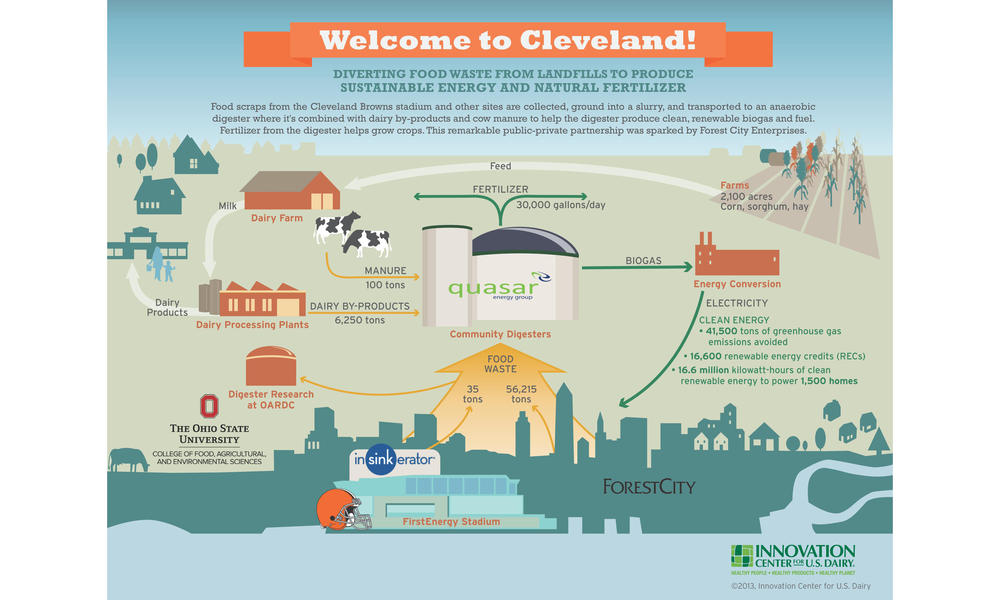 Currently, there are 239 anaerobic digesters on livestock farms in the United States, yet there is the potential for over 2,600 anaerobic digesters on US dairy farms. If mixed with food waste, this has a potential market value of over $3 billion and cuts carbon emissions by 13 million metric tons CO2e. This is comparable to the annual carbon emissions of more than 3.2 million U.S. passenger cars.

Now, why doesn’t every farmer have a biogas system?
Up until now, farmers have faced several hurdles that must be overcome. Farmers are tasked with finding partners to engage in long term contracts to supply organic food waste, parties that can provide loans, and the permitting approval process to build a digester can be complex. Additionally, local electricity utilities must supply the electricity to the grid at competitive rates.

1. Promoting Biogas Utilization through Existing Agency Programs
USDA, DOE, and EPA will use their existing programs to advance the biogas system by aligning programs, research plans and standards.

3. Strengthening markets for biogas systems and system products
There are market potentials for digesters and co-products that can be realized through supportive activities from the agencies, in particular related to energy and other value-added, non-energy products, such as nutrient recovery and recycling, fiber, and soil amendments.

4. Improving communication and coordination
USDA, DOE, and EPA will coordinate and invest in research and development to aid industry’s efforts to advance in the biogas sector.

As the biogas industry develops, the dairy industry has the opportunity to identify and optimize value for dairy. Since biogas digesters play a role in conserving natural resources, WWF will continue to work with partners like The Innovation Center for U.S. Dairy to advance the uptake and further development of biogas digesters on US farms.

The goal is to turn the manure into products such as electricity, fuel, fiber and fertilizers which reduces methane emissions, conserves natural resources and also our dependence on fossil fuels. This benefits not only farmers, but also corporations, communities, and the environment.