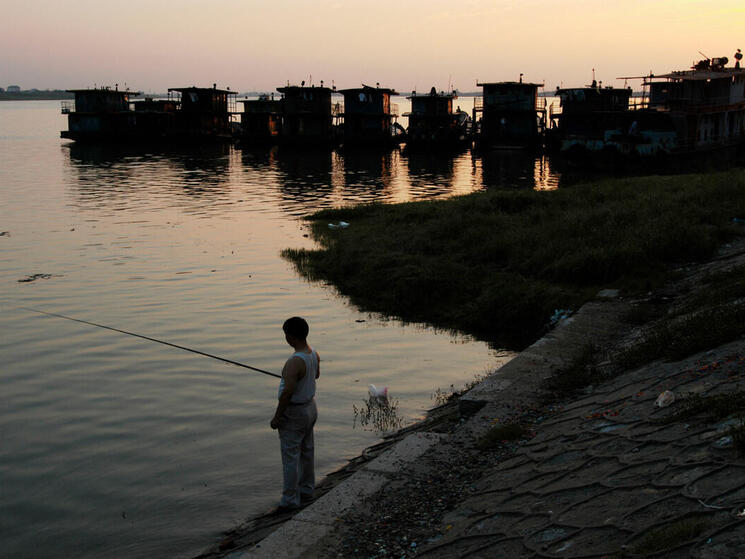 The Living Yangtze: A Case Study for Valuing Rivers

Valuing our rivers can help fight against climate change and support wildlife and communities.

Healthy rivers help us adapt to climate change and build more resilient societies, economies and ecosystems. Free-flowing rivers allow for deltas and mangroves that protect coastlines. They sustain fisheries and forests, provide water and support floodplain agriculture to grow food, supporting millions of people. Yet the world over, rivers are themselves under threat from climate change and poorly planned infrastructure. This in turn is threatening our world's fisheries, forests, wildlife habitats and river-based communities. Climate change will also increase the pressure on freshwater species populations, which have already crashed by 84% on average since 1970, according to the latest WWF Living Planet Report.

Nowhere is the situation more urgent than in the Yangtze river basin. The mighty Yangtze river emerges in the Tanggula Mountains on the Qinghai-Tibet Plateau. Its main river flows from west to east over nearly 4,000 miles until it reaches the East China Sea. It is a critical lifeline for businesses, transportation, agriculture and millions of livelihoods. It is also rich with diverse wildlife, including threatened species including the critically endangered Chinese sturgeon and the endangered Yangtze finless porpoise. Even more alarming, many once-plentiful animals are now functionally extinct, such as the Baiji Dolphin.

Launched on World Rivers Day, WWF’s Living Yangtze Index (LYI) provides a picture of the overall health of the Yangtze River’s freshwater ecosystems and where restoration or other action is needed. Aquatic biodiversity, hydrology and water quality are the three main elements evaluated in the LYI and then graded A-E, with E being the lowest grade and in the worst environmental state. These grades together provide a comprehensive picture of the basin’s health.

Major pressures on the river include climate change, land use change, resource over-utilization, pollution, loss of river and floodplain lake connectivity, and reservoir regulation. Overall, the Yangtze was given a grade of B- with a wide variation in level of health across different parts of the basin. The source of the river is in good condition with an overall score of A, moving downriver the grades drop to a low of C for the Middle Yangtze and all four lakes (Dongting, Poyang, Taihu, and Chaohu) receive grades between a C and D-. The Yangtze River Basin lakes are shrinking dramatically and could shrink even further if measures are not taken to stem the impacts of climate change, increased industrialization, and urbanization along China’s longest river.

Recommended actions specific to each part of the basin range from ensuring environmental flow releases from reservoirs, to maintaining river connectivity and protecting natural habitats, to enforcing fisheries bans, to cleaning up and preventing discharge of toxic chemicals and other pollutants. These are aligned with the broader call from WWF and others for an Emergency Recovery Plan for Freshwater Biodiversity.

Better management of our rivers and wetlands can drive global efforts to tackle the most serious climate risks. Innovative practices and policies will be needed, including a global switch to more nature-based solutions, which must be at the heart of efforts to make infrastructure more resilient to climate impacts and reduce water risk.

One example of better water resource management is highlighted in WWF’s partnership with The Coca-Cola Company on the Yangtze. Together with the Hunan provincial government, we’ve partnered to improve the health of the Liuyang River (a tributary of the Yangtze near Jinjing), the Xiang River, and Dongting Lake. We’re working to anchor and scale the positive impacts through engagement, advocacy and data sharing with policy-makers, stakeholders and communities. And we have worked together on the Living Yangtze Index to continue tracking the health of the river basin for future generations.

No matter where we live, we all live downstream of some water source. Rivers not only provide the water for us to drink, but their management is also critical for buffering against climate impacts. By protecting them we protect the health of people and planet.

“Everyone knows that the climate crisis will impact our communities, cities and companies through water, yet safeguarding the health of the world’s rivers and wetlands – our freshwater life support systems - is low down the list of global priorities. Transforming how the world values and manages our priceless freshwater resources is the most powerful way to adapt to the climate crisis. Governments and businesses must urgently pursue water policies, practices and investments that recognize the full value of healthy freshwater systems ”