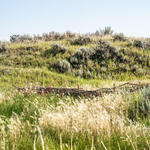 Widespread drought conditions continue to persist in much of the Northern Great Plains (NGP) according to University of Nebraska’s National Drought Mitigation Center. The NGP is experiencing increasing temperatures, changing precipitation patterns, and extreme events that are posing challenges to an already water-limited region. This region is also an integral part of the nation’s food supply, with vast tracts of land devoted to livestock grazing.

Humans and wildlife alike are forced to find ways to adapt to these increasingly common drought conditions. Through World Wildlife Fund’s (WWF) Ranch Systems and Viability Planning (RSVP) program, ranchers in Montana have access to an innovative cost-sharing program that can help ranchers adapt and become more resilient to drought conditions. 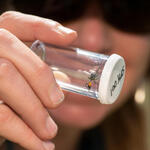 On a hot July day, I met up with Alexis Bonogofsky and Aaron Clausen of WWF’s Sustainable Ranching Initiative at Jeff and Marisa Sather’s ranch in northeastern Montana. Jeff and Marissa, a young ranching family who exemplify land stewardship, had recently signed up to participate in the One Square Foot initiative, a partnership between Air Wick and WWF, that will reseed 1 billion square feet (~23,000 acres) of previously disturbed grasslands and wildflower habitats in the Northern Great Plains. 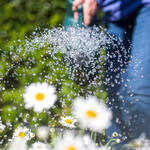 Spring is in the air and as the days grow longer and warmer, there is a natural desire to spend more time outside. If you are looking for a fun outdoor activity that can give you some time in the fresh air, while also helping the planet, we encourage you to plant a pollinator garden with native wildflowers. WWF will be doing the same, through our continued work with Air Wick® to reseed 1 billion square feet of native wildflower and grassland habitat in the Northern Great Plains. In celebration of National Wildflower Week, we’ve outlined some easy tips on planting your own pollinator garden. 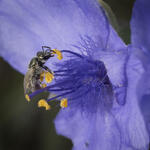 North America’s grasslands are one of the least protected and most at-risk biomes on the planet, and as the grasslands disappear, so do the critical ecosystem services they provide. During the last decade, over 2 million acres of grasslands were plow-up to make way for croplands across the US and Canadian Great Plains. This is a rate of habitat destruction that’s comparable to the clearing of the Brazilian Amazon, and it’s occurring in our own backyard.

In 2021, to combat this loss, World Wildlife Fund (WWF) launched an exciting new three-year partnership with Air Wick® called “One Square Foot.” The partnership’s mission is to reseed 1 billion square feet (~23,000 acres) of previously disturbed grasslands and wildflower habitats in the Northern Great Plains (NGP). Wildflowers are not just beautiful: they provide food and shelter for pollinators, grassland birds, and many other species that are native to the region. In our first year, despite on-going drought conditions across the NGP, WWF’s Sustainable Ranching Initiative was able to reseed nearly 51 million square feet of wildflower and grassland habitat.

For year two of the partnership, we hope to create even greater awareness about the importance of grasslands and wildflowers through a campaign extension of One Square Foot called the “Super Bloom.” In nature, a Super Bloom is when millions of wildflowers bloom at once, carpeting a landscape in color as a response to a period of late winter or early spring rains. Beginning on March 12th, WWF and Air Wick® aim to create a Super Bloom by planting a record-setting number of native wildflower seeds —and we want you to join us. From March 12th through June 1st, 2022, if you share any wildflower to Instagram, Facebook, Twitter or Pinterest—a photo, a video, an illustration (any wildflower counts)—we will plant one square foot of wildflowers in the Northern Great Plains as a thank you, and to help further restore this important habitat. Just tag your posts with #SquareFootSuperBloom and share them to your feed. It’s that simple!

To learn more about the “One Square Foot” initiative and the wildflowers that are native to your part of the US, please visit our project webpage.