Join us for a joint Climate Desk Live and World Wildlife Fund (WWF) event moderated by Chris Mooney featuring Stu Ostro, Senior Director of Weather Communications at the Weather Channel; and Jennifer Francis, Research Professor, Institute of Marine and Coastal Sciences at Rutgers University. They will be discussing the alarming science behind climate change's increasingly wild weather. Chris Mooney is a science and political journalist, podcaster, and the host of Climate Desk Live. 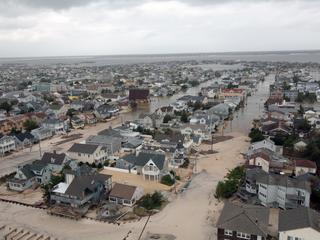 Stu Ostro is a senior meteorologist at the Weather Channel, and was a longtime climate change skeptic—until the devastating 2005 Atlantic hurricane season, when he started documenting hundreds of cases of extreme and unusual weather and the patterns associated with them, and became convinced that something is very off about the atmosphere.

Jennifer Francis is a top climate researcher focused on the Arctic, whose work has drawn dramatic attention in the context of the very warm U.S. winter of 2012 (and attendant droughts and wildfires), the Russian heat wave and Pakistan floods of 2010, and other extreme weather events.

Both are now leading voices in diagnosing the wild weather that the world has seen of late—most recently, an intense winter in the UK that threatens to last throughout April.

For Ostro and Francis, the explanation for what we’re seeing is simple. More heat in the Earth’s system due to global warming is felt everywhere, and that includes the massive-scale patterns of atmospheric circulation that give us our weather.

Ostro’s observations suggest that global warming is increasing the atmosphere’s thickness, leading to stronger and more persistent ridges of high pressure, which in turn are a key to temperature, rainfall, and snowfall extremes and topsy-turvy weather patterns like we’ve had in recent years.

Francis’s scientific story is complementary. She sees the rapid warming of the Arctic weakening the northern hemisphere jet stream, and thus, once again, slowing down the weather, leaving a given pattern stuck in place for longer (making any event potentially more disruptive and extreme).

We don’t know—yet—what the next extreme manifestations of these large-scale changes in weather patterns will be. But as Ostro and Francis warn, we had better be getting ready for them --because this isn't your grandparent's Planet Earth any longer.