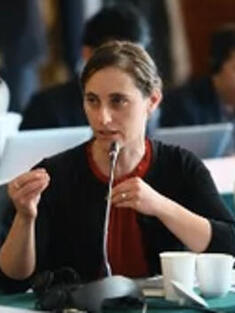 Genevieve Maricle serves as the Director, Climate Policy Action for the World Wildlife Fund, with a particular focus on the drive to raise climate ambition and action of the national governments, corporates, and sub-national governments alike. She is responsible for WWF’s federal climate policy work and leads the America is All In team. She recently served as Global Strategic Opportunities Manager in WWF’s global Climate and Energy Practice. Prior to her time at WWF, Genevieve served as senior policy advisor to U.S. Ambassador to the UN Samantha Power on sustainable development and climate change. She led the U.S. Mission to the UN's efforts surrounding both the Paris Agreement on climate change and the Sustainable Development Goals (SDGs). For the latter, she served as the deputy lead U.S. negotiator.

Genevieve also worked as a climate and development policy advisor at the U.S. Agency for International Development (USAID), where she led policy efforts on the 2030 Development Agenda/SDGs, USAID's engagement in the Rio+20 Conference on Sustainable Development, and a range additional climate and development policy matters. She oversaw the release of USAID’s first Climate Change and Development Strategy, and helped to set strategic budget priorities for the newly formed Global Climate Change Initiative in 2009. She began her time at USAID as an American Association for the Advancement of Science (AAAS) Science and Technology Policy Fellow. Maricle received her BA in mathematics and environmental science from Northwestern University, and PhD from the University of Colorado at Boulder in climate science policy.