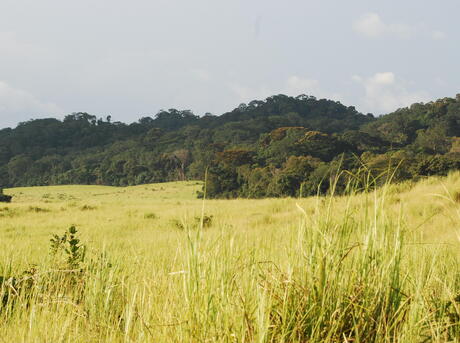 Grasslands have many names—prairies in North America, Asian steppes, savannahs and veldts in Africa, Australian rangelands, and pampas, llanos and cerrados in South America. But they are all places where there is too little rain for trees to grow in great numbers. Instead, these lands are covered in grasses and grass-like plants that have growing points close to the soil and can keep on growing even after being nibbled on by animals. These grasses can support high densities of grazing animals, such as zebra, antelope and bison. And these herds in turn support iconic predators, including lions and cheetahs.

Grassland ecosystems are particularly fragile because water is scarce. Grasslands in Australia, Africa and South America are often dependent on regular episodes of fire for renewal. They are also prime targets for human development, which can have devastating consequences. Humans plow grasslands to plant wheat and other crops, replace wildlife with domestic livestock, and kill predator and prey alike. Few grasslands are protected from development.

After European settlers came to North America, much of the continent’s grasslands were soon transformed into agricultural fields, nearly wiping out some of its iconic wildlife, such as bison. The consequences were devastating. When drought struck the region in the early 1930s, crops couldn’t grow and bare fields were swept into powerful dust storms that destroyed farms and made the land uninhabitable for years.

Where the meadowlark sings

Grassland birds are spectacular, but they are also North America's fastest-declining group of birds. 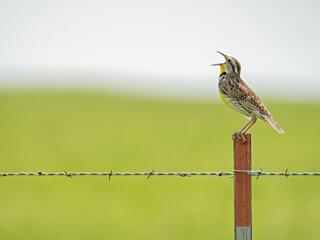 Grassland landscapes are sensitive to disturbance. Many have been changed forever as humans have moved in and plowed the land to make room for farms, replacing wildlife with herds of livestock and hunting and killing key species.

Humans have long looked to grasslands and their ability to support large herds of animals as an opportunity. Grassland wildlife in some ecosystems around the world must compete with domestic livestock for food and water. In some places, livestock are kept in such large densities that overgrazing and soil erosion occurs, degrading the landscape. But when sustainably managed, herds of domestic livestock can help preserve grassland biodiversity and avoid conversion to cropland.

To feed a growing human population, most of the world’s grasslands, including the American prairies, have been converted from natural landscapes to fields of corn, wheat or other crops. Grasslands that have remained largely intact until now, such as East African savannahs, are at risk of being lost to agriculture.

The plants and animals that live in a grassland are connected through a vast web of interactions. But the removal of key species—such as buffalo and prairie dogs in the American West—and introduction of invasive species, like cane toads in northern Australia, have disrupted the balance in these ecosystems and damaged a host of other species.

Grasslands are home to some of the most magnificent animals on the planet—elephants, bison, lions—and hunters have found them to be enticing prey. But when hunting is not controlled or is conducted illegally, species can be wiped out.

WWF works with local stakeholders to preserve biodiversity and ensure that natural resources are used in a sustainable manner that benefits the local community. We also work with governments and local communities to conserve and sustainably manage the water and other resources in grassland ecosystems.

Because illegal hunting is a problem across central Africa and many other areas of the world, WWF works with TRAFFIC, the world’s largest wildlife trade monitoring network, to stop illegal wildlife trade. WWF also advocates for nations to more effectively enforce wildlife laws and has trained local wildlife authorities in modern methods of antipoaching and provided equipment and provisions for antipoaching teams in several nations.