Improving fishing gear is a key step in reducing bycatch. Gear modifications can increase the chances of escape for non-target species or, better yet, reduce the number caught in the first place. Simple, inexpensive innovations have proven effective in many fisheries and some of the best solutions to date have come from fishers themselves.

Through the Smart Gear competition, WWF supports innovation in solving the problem of fisheries bycatch. The competition brings together conservation interests with industry and government for unique cross-sector collaboration.

Open to all, the competition has attracted entries from all kinds of people who care about fishing— from gear technologists and fishermen to engineers and chemists. Our international judges panel includes fisheries experts, gear technologists, fishermen, scientists, researchers and conservationists.

In addition to running the competition, WWF also helps advance the winners toward implementation by the fishing industry. This may include further modification work, additional field trials or even help in navigating bureaucratic channels.

The 2014 Smart Gear grand prize of $30,000 was awarded to a Norwegian team whose device addresses bycatch in purse seine fisheries. This “Air Powered Sampling for Purse Seine Fisheries,” allows fishers to check the contents of the net in the early phase of fishing, about 40-50 meters away from the vessel, avoiding crowded nets, fish stress, and physical damage. Using an air cannon, a sampling tube containing a mini-trawl is launched into the net to collect a representation of the fish. A hydraulic winch is then used to haul the net in for inspection. If the sampled fish are deemed unwanted catch, the seine is opened up to release them. Conducting this sampling process at such an early stage secures greater survival of fish should they need to be released. The grand prize winning team includes: Bjoernar Isakesen, Kurt Hansen, and Jostein Saltskaar. 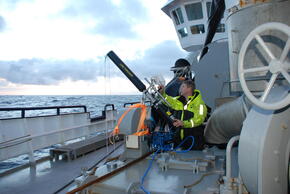 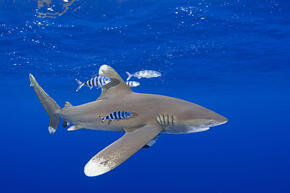 The Super Polyshark, designed by Florida researchers, Dr. Eric Stroud and Dr. Patrick Rice, is a shark bycatch reduction device which uses time-released pellets that, when dissolved in water, create an odor that repels sharks. The pellets, made up of a selective semiochemical, are inserted into the squid bait before being placed on longline hooks. This nontoxic and biodegradable repellent has achieved a 71% difference in shark catch between treated and control baits over a four hour window.

The device itself is a simple three-component system. A paper tube holds a polymer containing the shark repellent. This tube is then cut into “nuggets”, or pellets, about 7.5 centimeters tall. These are then inserted in to the longline bait. An exterior comparison shows no distinguishable characteristics between a control squid and one containing the Super Polyshark pellet. Target fish, as well as bony fish like tuna and swordfish, do not detect the semiochemical and therefore their catch rate remains unchanged.

FRESWIND is an innovative flatfish bycatch reduction device intended for demersal roundfish fisheries. The concept for this devise is based on a sequential selection process for flatfish and roundfish species, an improved selection device and the alteration of flatfish behavior. The device was designed by a multi-disciplinary team composed by fishing technologists from the German Thünen Institute for Baltic sea fisheries (Bernd Mieske, Juan Santos, Annemarie Schuetz and Daniel Stepputtis), the Swedish University of Agricultural Sciences (Hans Nilsson), the Norwegian company SINTEF Fisheries and Aquaculture (Bent Herrmann) and by Swedish fisherman, Vilnis Ulups.

The SeaBird Saver is an innovative bird deterrent device based on a laser system and optional acoustic stimulus to aggressively deter birds from dangerous fishing areas, ultimately reducing bird bycatch as well as fatalities while optimizing overall catch for fishermen. The two-person team is made up of Ernst Schrijver, marine biologist, and Wouter van Dam, product manager for Dutch company SaveWave.

The SeaBird Saver is comprised of a mountable, flexible laser source and optional sound system; its deterring effect is made possible by a visual stimulus with a discretionary acoustic stimulus add-on—marketed separately but combined together to increase efficacy. The visual stimulus component is produced by a patented laser beam, emitting a beam that is easily widened for both optimal visibility and the reduction of possible retinal damage caused in birds due to the the unlikely event of long-term exposure. The laser beam itself is calibrated with the correct wavelength for bird eye sightability while simultaneously producing the optimal strength to be effective on liquid services. The laser beam and its scattering effect produces a powerful bird deterrent, especially effective during low visibility conditions—dawn, dusk, rain, and fog. Because most marine birds are threatened by the presence of the laser beam dot—understanding it to be an unnatural and unpredictable threat—their intuitive response is to avoid contact and fly away.