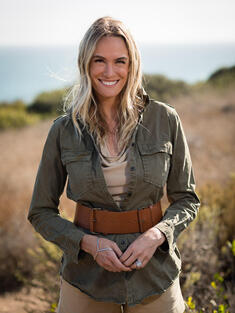 ASHLAN GORSE COUSTEAU is a journalist and explorer who travels the world in search of stories that captivate and inspire. As a host, speaker, author, and filmmaker, Cousteau uses the power of entertainment to save the world. Most recently Cousteau wrote Oceans for Dummies, a fun and easy to understand book explaining the entire ocean—its ecosystems, history, climate, currents, species, and more, published February 2021. Cousteau was the co-star of Travel Channel’s award-winning series Caribbean Pirate Treasure for three seasons. Her documentary, Nuclear Sharks, for Discovery Channel’s Shark Week 2016, premiered as the #1 rated show across all cable programming. For over a decade, Cousteau worked as an on-camera correspondent and co-host for Emmy award-winning entertainment shows E! News and Entertainment Tonight. Cousteau’s endeavors go beyond the small screen. She traveled to Antarctica to be a headlining speaker at TedxScottBase. She has served as host for the United Nations Convention on Biological Diversity, and was selected by former Vice President Al Gore to be the opening anchor for 24 Hours of Reality. She is a voice for environmental issues on Capitol Hill through events and briefings, and serves on the advisory boards of Ocean Unite and the Environmental Media Association, as well as WWF. Cousteau graduated from the prestigious School of Journalism at the University of North Carolina at Chapel Hill. She lives in Los Angeles with her husband, daughter, rescue dog, and two chickens, and has explored all seven continents.