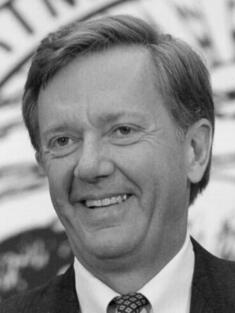 Appointed Secretary of the Interior by President Clinton in 1993, Babbitt served for eight years, during which he led in the creation of the forest plan in the Pacific Northwest, restoration of the Florida Everglades, passage of the California Desert Protection Act, and legislation for the National Wildlife Refuge system. As a certified fire fighter, Babbitt brought his front line experience to creating a new federal wild land fire policy that emphasizes the role of fire in maintenance and restoration of natural ecosystems. He pioneered the use of habitat conservation plans under the Endangered Species Act and worked with President Clinton to create twenty two new national monuments, including the Grand Staircase Escalante National Monument in Utah.

Babbitt is perhaps best remembered by American schoolchildren as the Secretary who brought the wolves back to Yellowstone. He is the author of “Cities in the Wilderness” recently issued by Island Press, in which he lays out a new vision of land use in America. Babbitt resides in Washington with his wife, Hattie, a former Ambassador to the Organization of American States. They have two children, Christopher, a lawyer residing in San Francisco, and T.J. a teacher in the Los Angeles public school system.