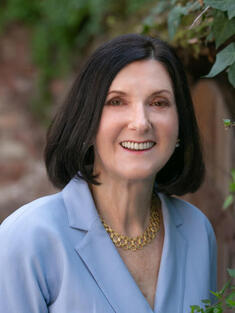 CYNTHIA EISENBERG became involved with World Wildlife Fund over 20 years ago after a trip to Africa showcased their work. Since 2003 she has been actively engaged in WWF’s Northern Great Plains restoration project (NGP), our nation’s largest restoration project in the lower 48 states. Eisenberg currently serves on WWF’s Northern Great Plains Advisory Committee, where she plays an integral role in helping restore large sections of the prairie to its environmental integrity as documented by Lewis and Clark 200 years ago. By restoring the vital ecosystem of this living prairie, NGP is helping to create a vibrant and sustainable future for communities and species across the region. Through their dedication to preserving the native grasslands, NGP is promoting carbon sequestration as well as water storage and filtration, contributing to a nature-based solution to climate change mitigation. Eisenberg has held board positions with several highly respected non-profit organizations that educate and inform, preserve the environment, mitigate climate change, address important global issues, and promote the accomplishments of women. She is a member of the National Association of Corporate Directors (NACD), the recognized authority on leading boardroom practices. Eisenberg joined the Golden Gate University (GGU) Board of Trustees in 2017 and is currently an officer and member of the executive committee. As secretary and chair of the Committee on Trustees, Eisenberg is in charge of corporate governance, including developing board practices and overseeing board selection and education. Eisenberg is an active member of the Student Experience Committee, which oversees academic excellence, graduation, and job placement. Golden Gate University takes great pride in its 100-year-plus history of expanding access to higher education. In 2019, GGU was ranked as the nation’s #1 Four Year College for Adult Learners by Washington Monthly for the fourth consecutive year. Eisenberg joined the International Women’s Forum Northern California (IWF NorCal) in 2005. IWF is an invitation-only membership organization of more than 7,000 diverse and accomplished women from 33 nations on six continents. Their mission is to support and advance the women leaders of today and tomorrow. In 2018 and 2020, Eisenberg was elected board member of IWF NorCal. She previously completed terms as both secretary and president of the board, and served as the vice president of the Legacy Foundation. Eisenberg is actively engaged in the IWF Global Network. Her 21-year career in management consulting and public accounting includes 15 years with Arthur Andersen. During her tenure, she developed leading-edge practices and led the West Coast Health Care Tax Team. She was one of the first women at Arthur Andersen to achieve partnership. Eisenberg cofounded and is active in Community Bank Investors, a specialized investment fund. She has a master’s degree in taxation and is a Certified Public Accountant (RET.).